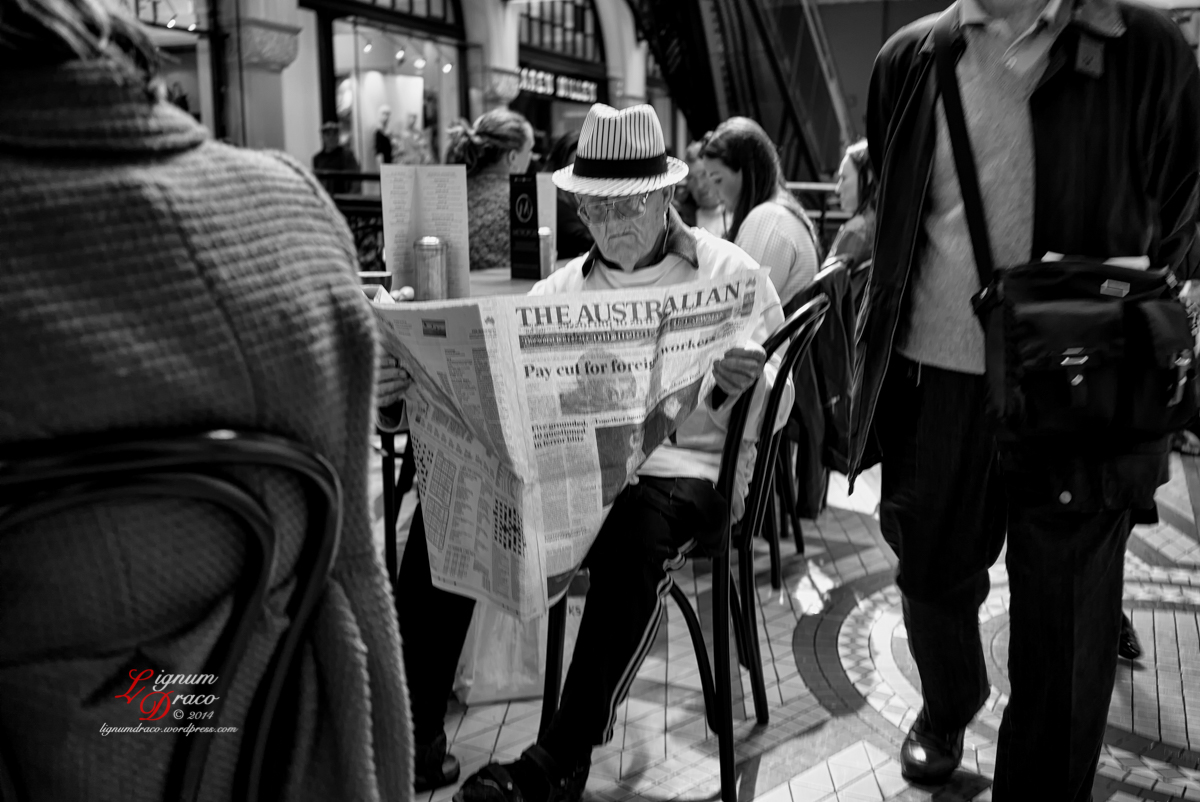 Some things in life are bad
They can really make you mad
Other things just make you swear and curse
When you’re chewing on life’s gristle
Don’t grumble, give a whistle
And this’ll help things turn out for the best. And…

…always look on the bright side of life…

“Always Look on the Bright Side of Life” is a comedy song written by Eric Idle that was originally featured in the 1979 film Monty Python’s Life of Brian.

I saw this man reading a newspaper, The Australian, obviously taking in the sad and bad news in society today. He wasn’t mad but he may have been chewing on life’s gristle. I grabbed another shot as I walked past. 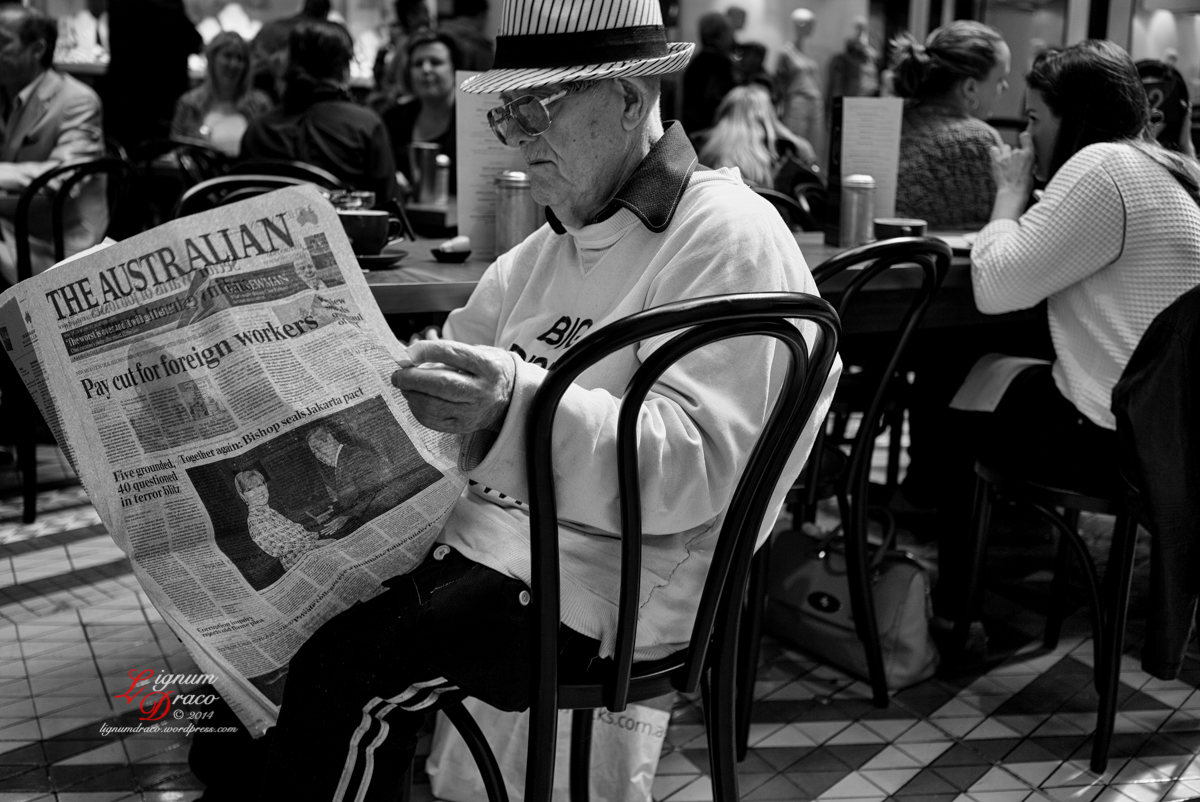 I saw something that made me almost give a whistle. I did a quick circuit and came back to shoot him again.

(Cryptic Hint: Monty Python looks at the bright side of life in their typical fashion)

Over at the WordPress Weekly Challenge, the topic this week is Dialogue, in photographic terms this can be perceived as an interaction between images. Placed together, each photograph opens up to meanings that weren’t there when viewed alone. (Hmmm, isn’t that what I always try to do?) 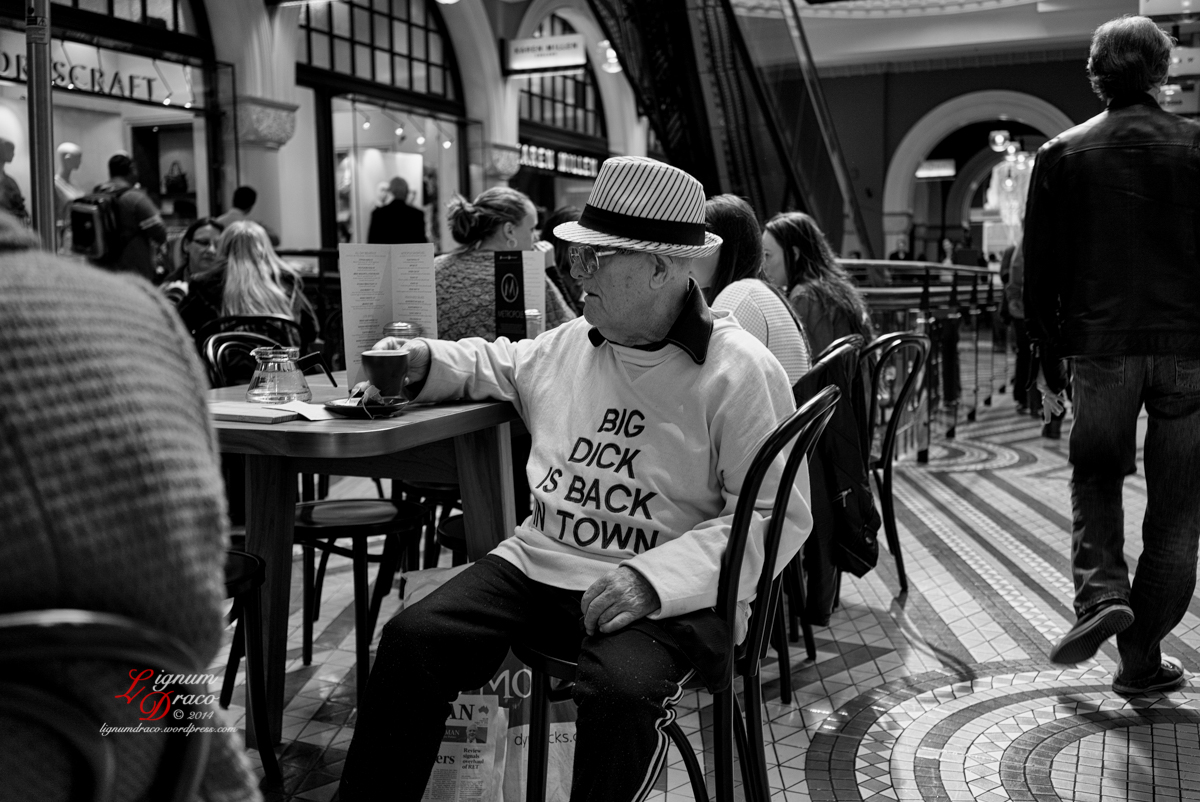 Fortunately, by the time I came back he had put his newspaper down so I could get a clear shot of him. This man was certainly looking on the bright side of life with the message on his shirt. Another shot for good measure.

And now for some gratuitous Monty Python’s Life of Brian facts:

The movie drew great controversy. Thirty-nine local authorities in the UK either imposed an outright ban, or imposed an X (18 years) certificate. Some countries, including Ireland and Norway, banned its showing, with a few of these bans lasting decades. A town in south Wales famously banned it at the time even though there was no local cinema. The filmmakers used such notoriety to benefit their marketing campaign, with posters stating “So funny it was banned in Norway!”

When Michael Palin, as Pontius Pilate, was daring his guards to laugh about Biggus Dickus’ name, he really was daring them. The people playing the soldiers were told not to laugh during the scene but were not told what Palin would be doing or saying. The giggling and laughing in the scene is genuine.

And the final word goes to Biggus: “Let me come with you, Pontiuth. I may be of thome athithtanthe if there ith a thudden crithith!”

95 thoughts on “Always look on the bright side of life”