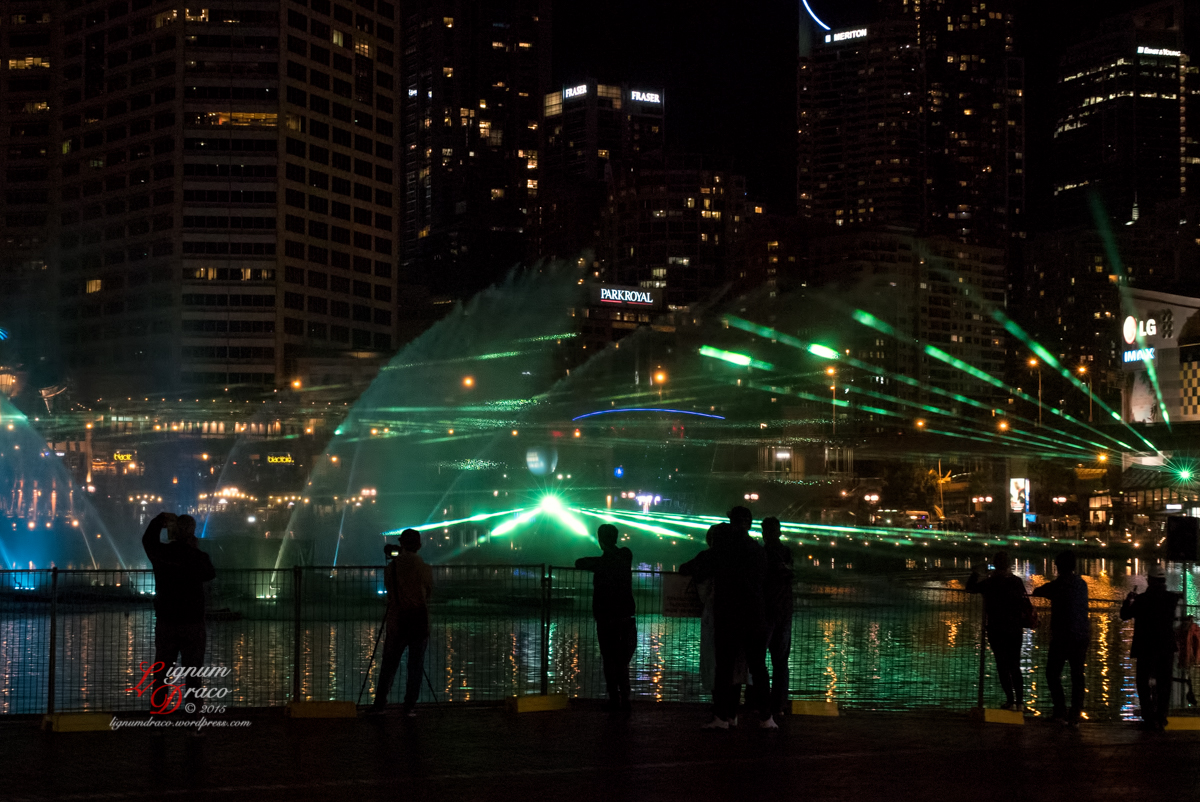 It’s time to leave the Museum of Contemporary Art and move west of the main stage of VIVID at Circular Quay to the Darling Harbour and Pyrmont region. Once again, this is the home of the Vivid Laser-Fountain Water Theatre, this year presented by Oracle-Liquid. 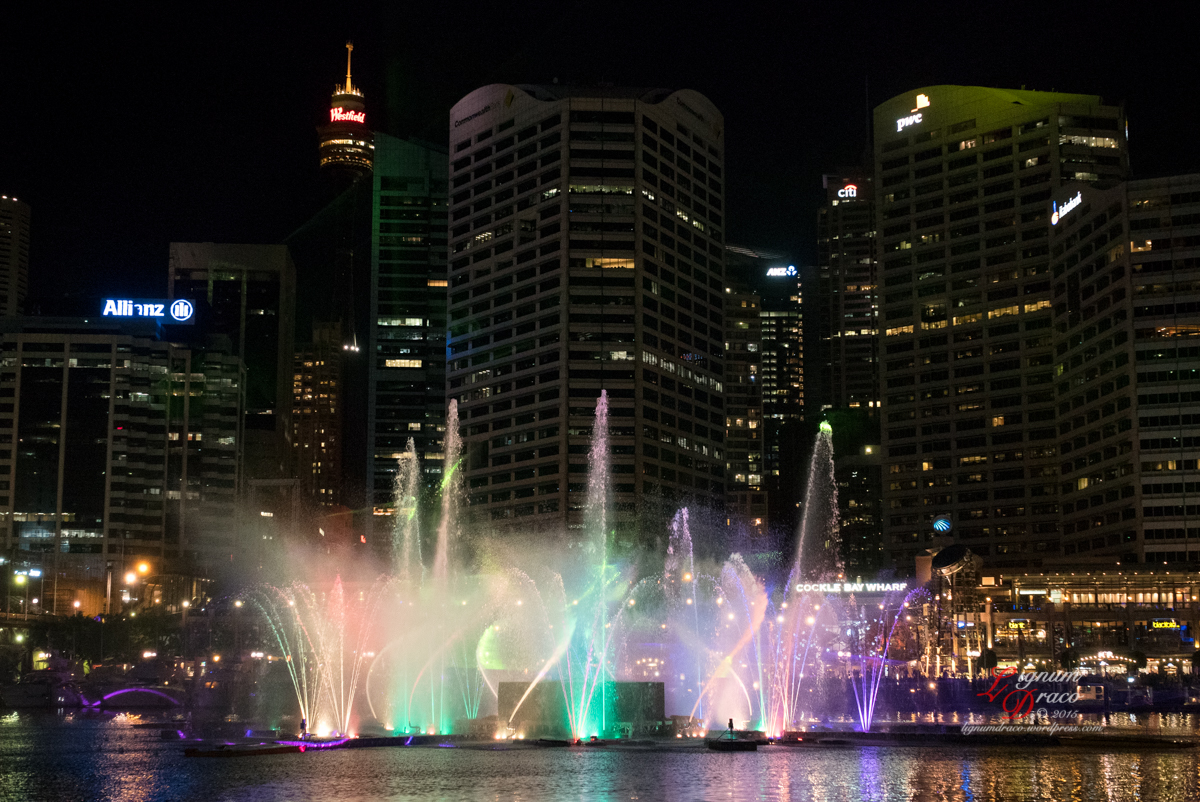 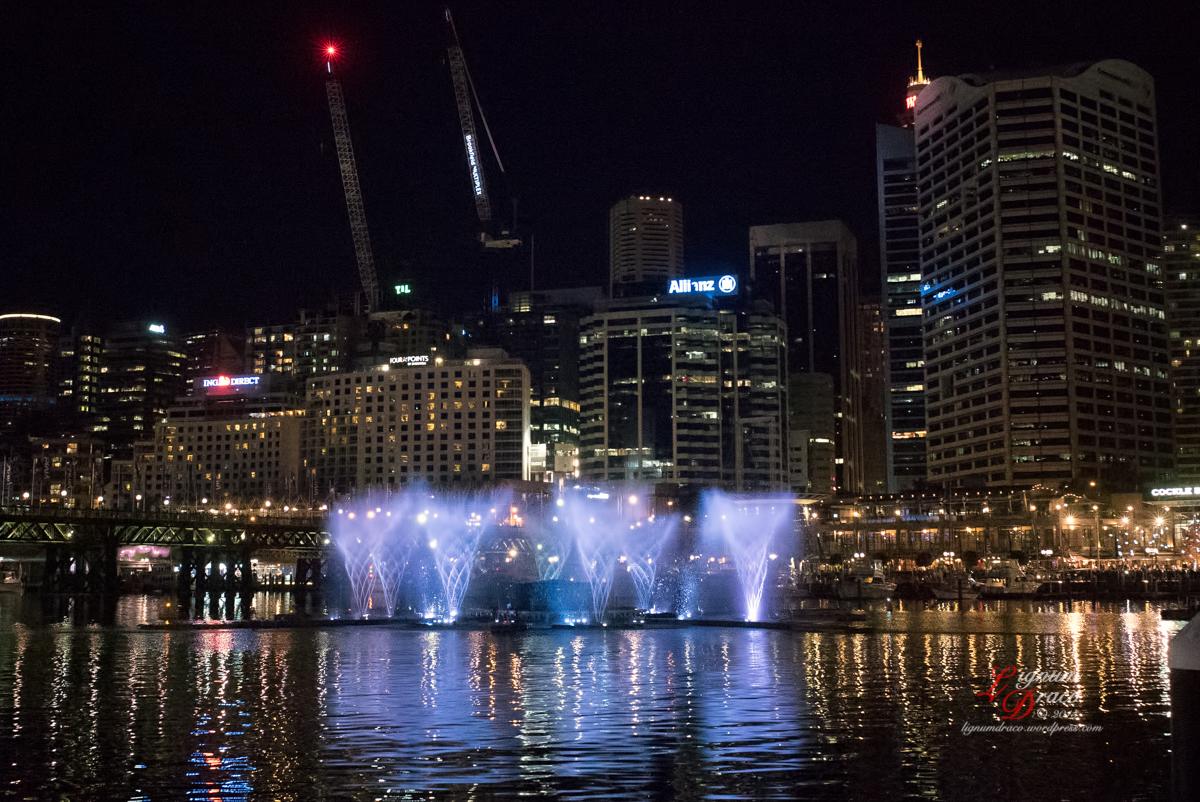 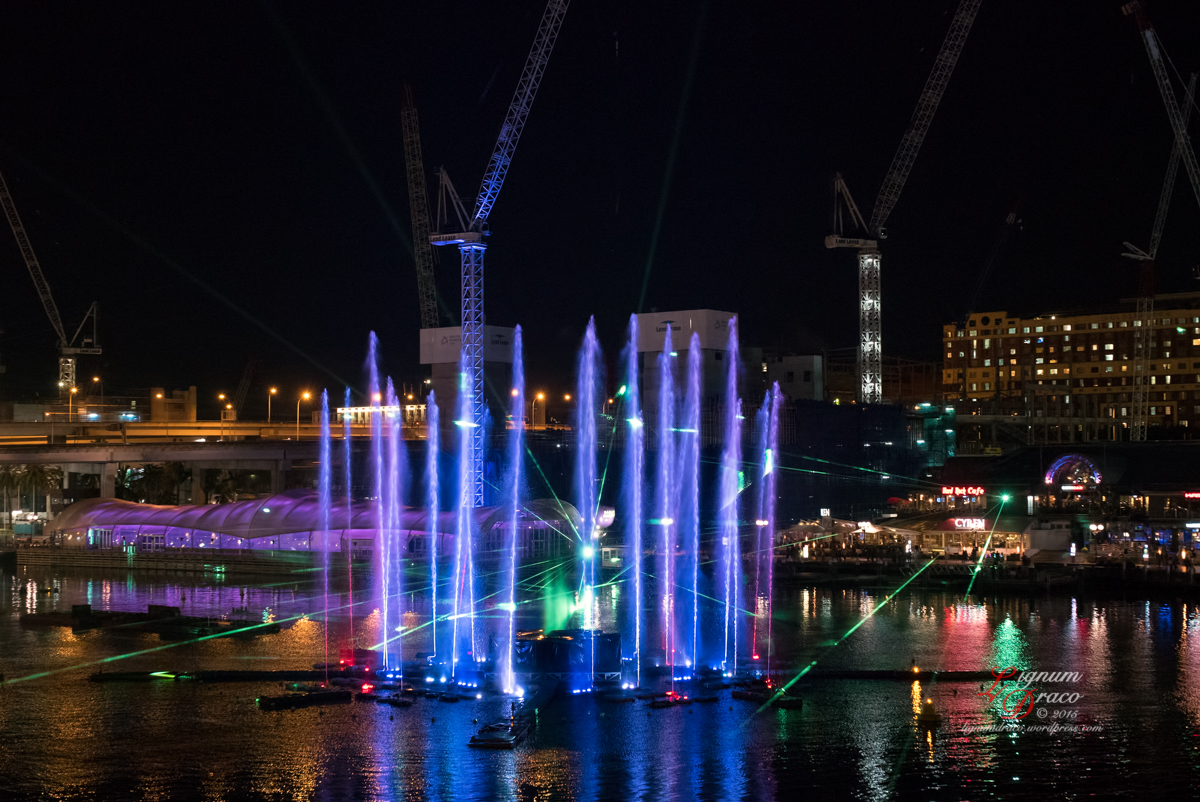 The centrepiece was a flower-like array of fountains and lasers, which shot jets of water 100m across the harbour and more than 30m into the night sky, sweeping and twisting, and interspersed with blasts of flames, laser and light effects that seemed to dance with the music. The display was the result of technical research and development, along with innovative engineering by Oracle-Liquid director, Glenn Turner. 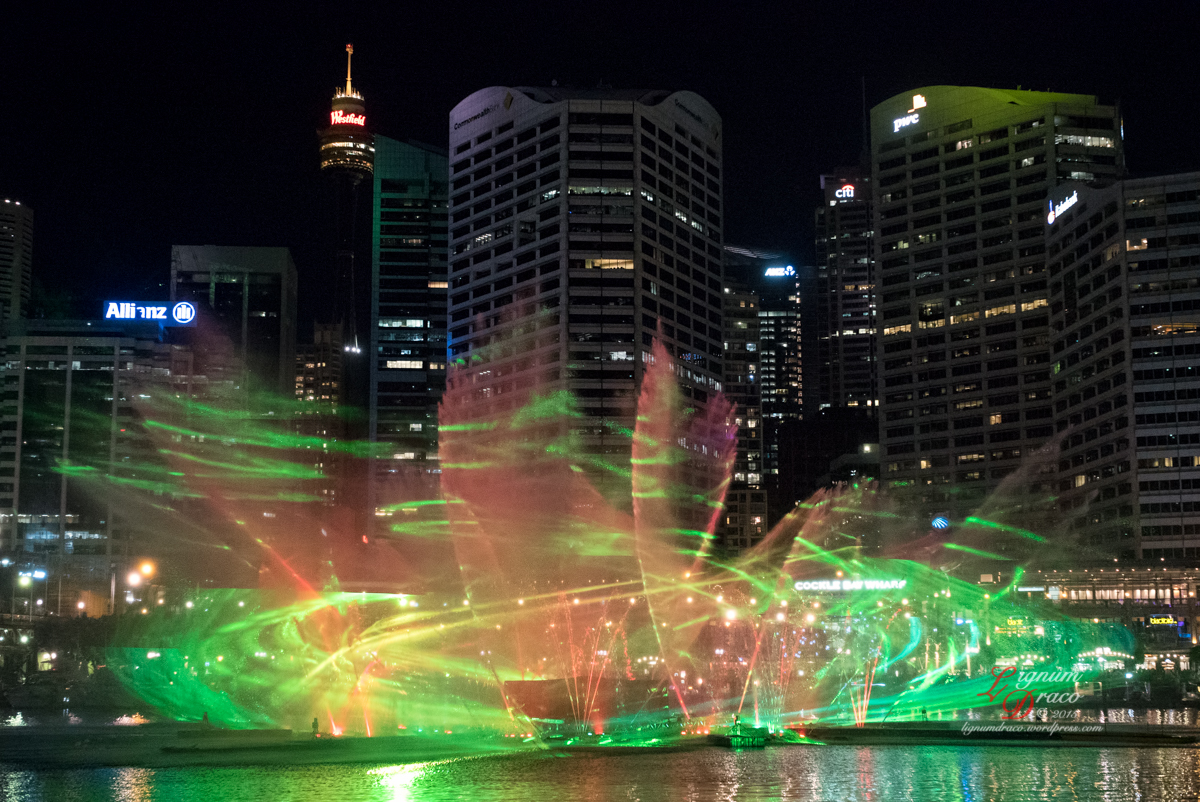 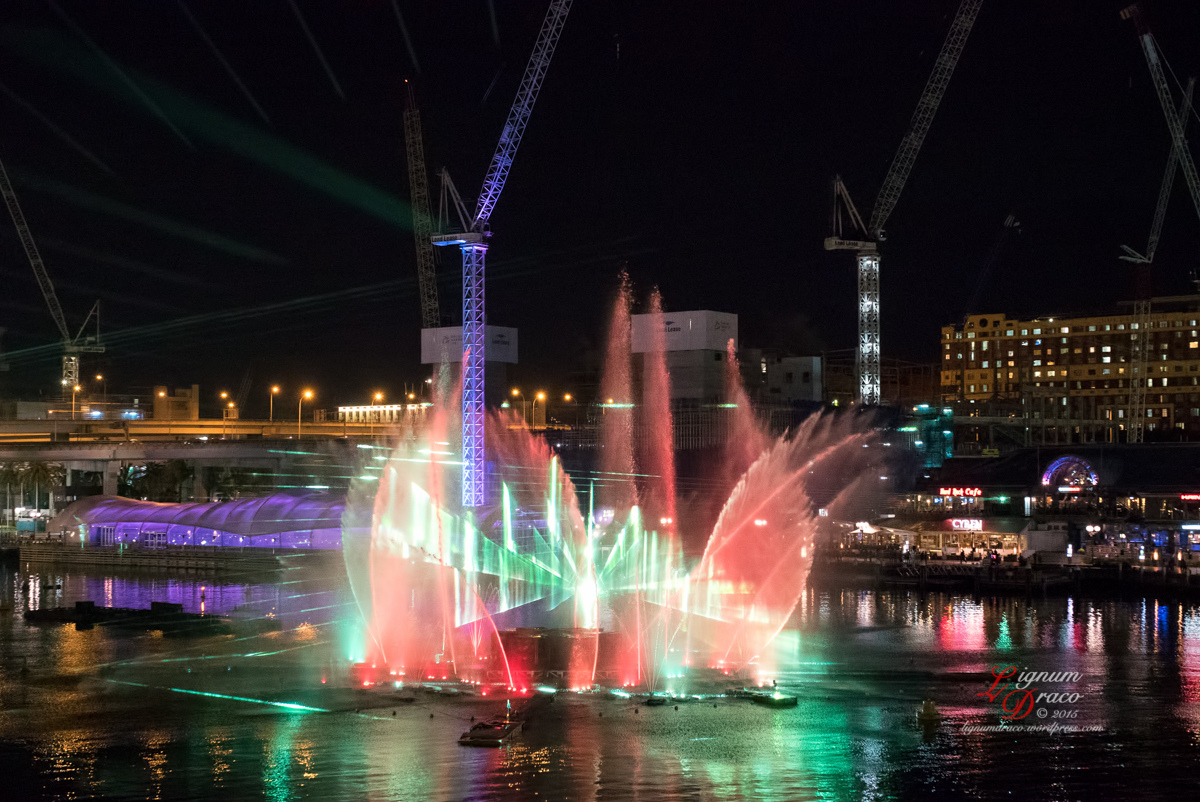 Vivid 2015 provided an opportunity to use the technology and present many of Turner’s highly creative ideas in new liquid art forms, animations and integrated laser and lighting approaches. 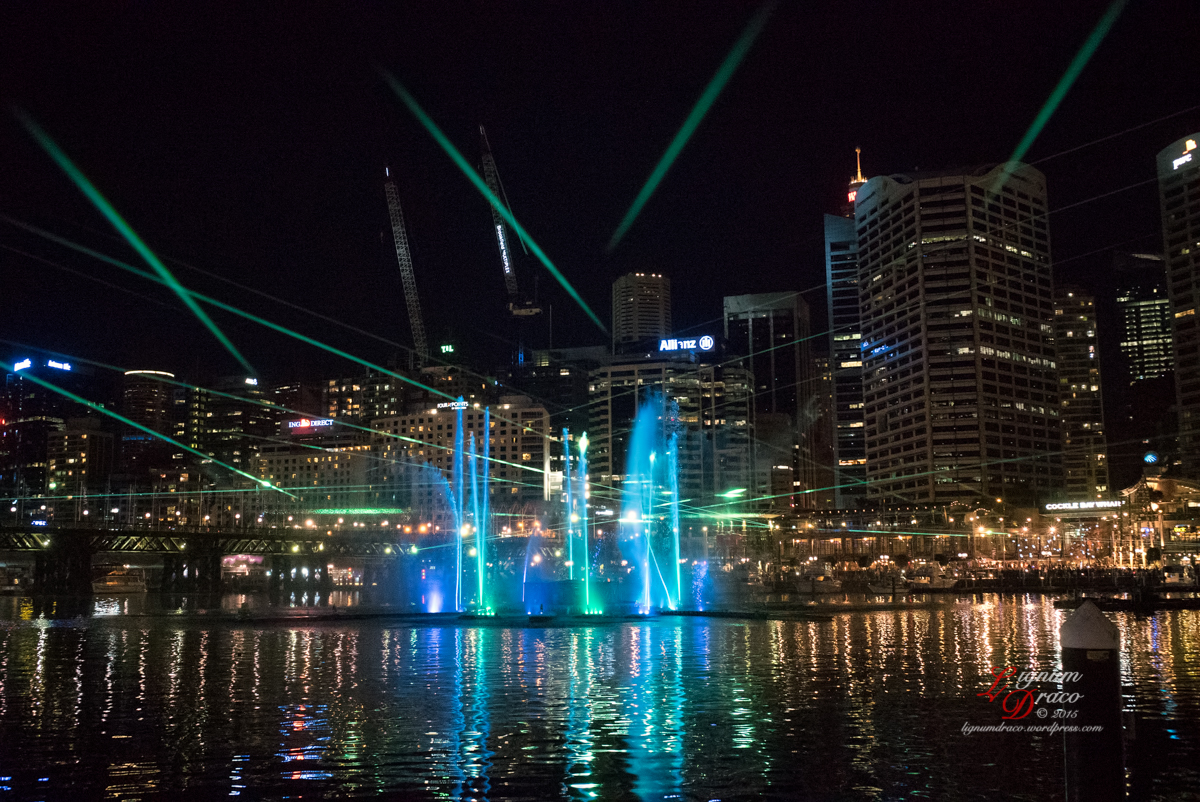 The display launched and recycled over 30,000 litres of seawater per minute; it required 15 crew to install and took over six months to develop. 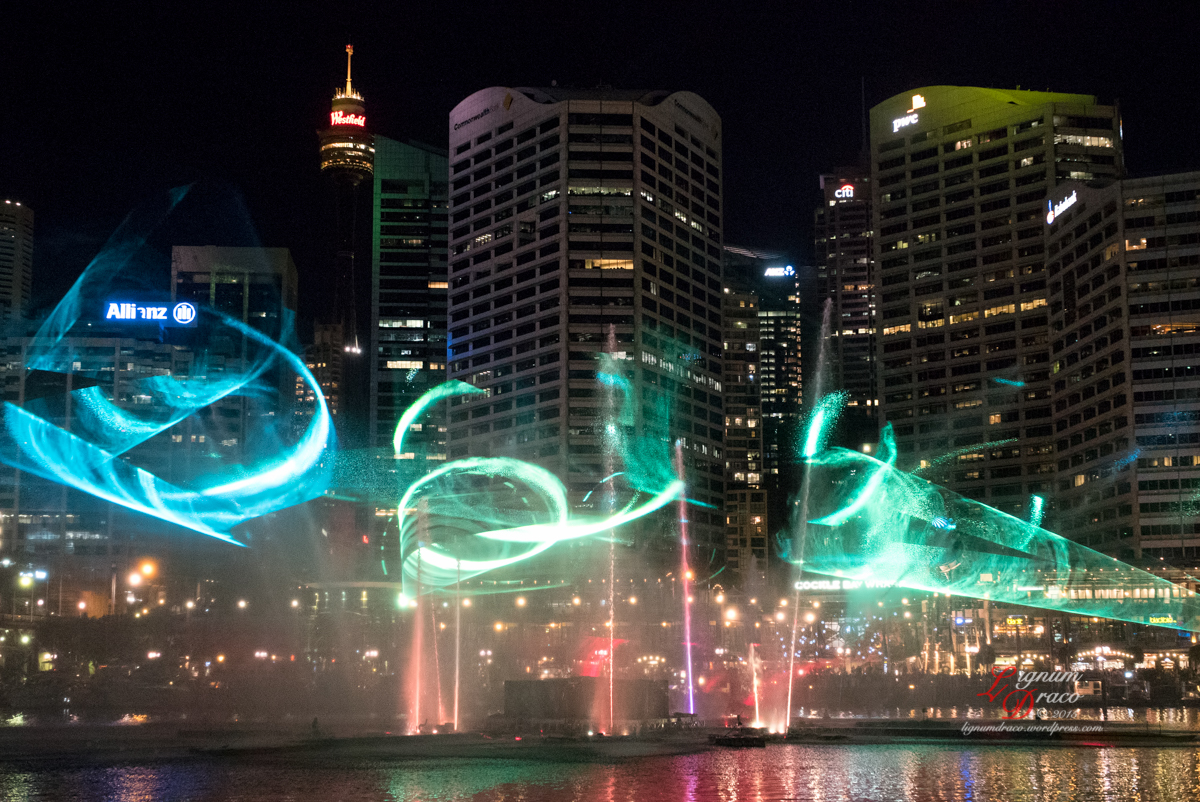 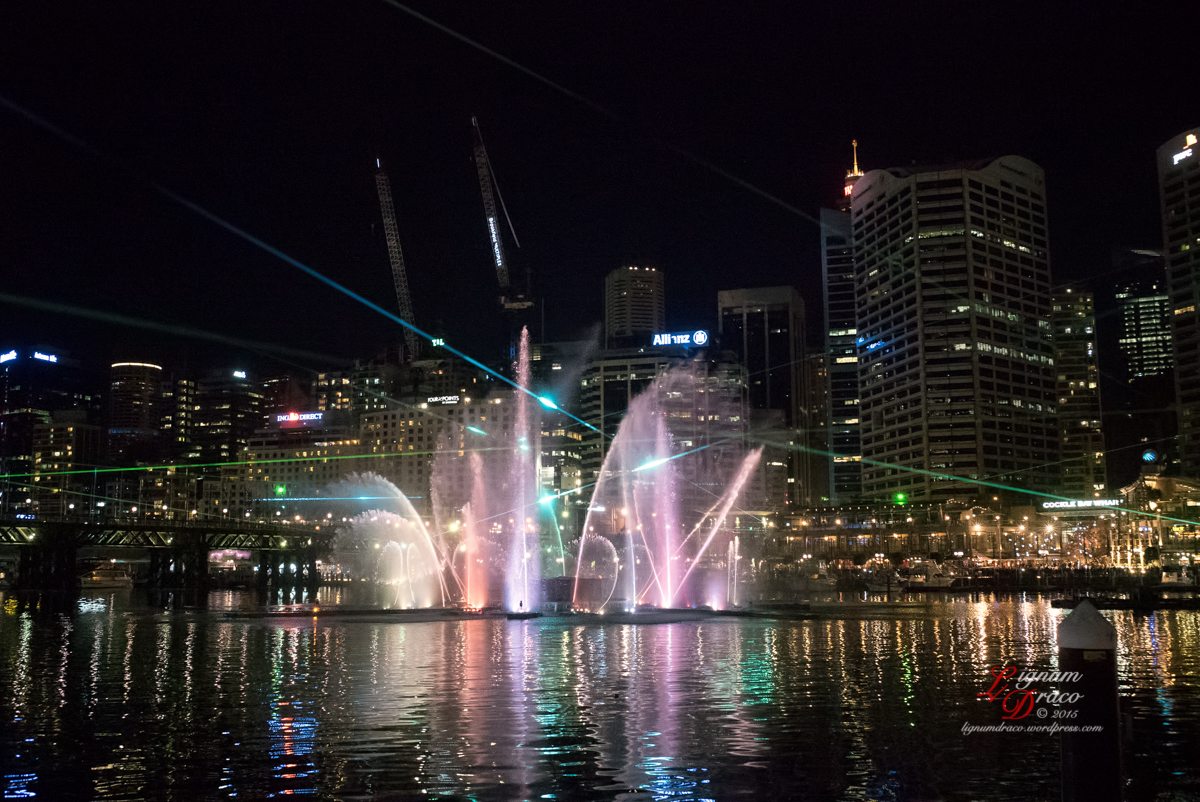 The staging equipment was mostly submersed below the water and used 100 tonnes of buoyancy and more than 20 km of high-power cabling as well as wireless communications. 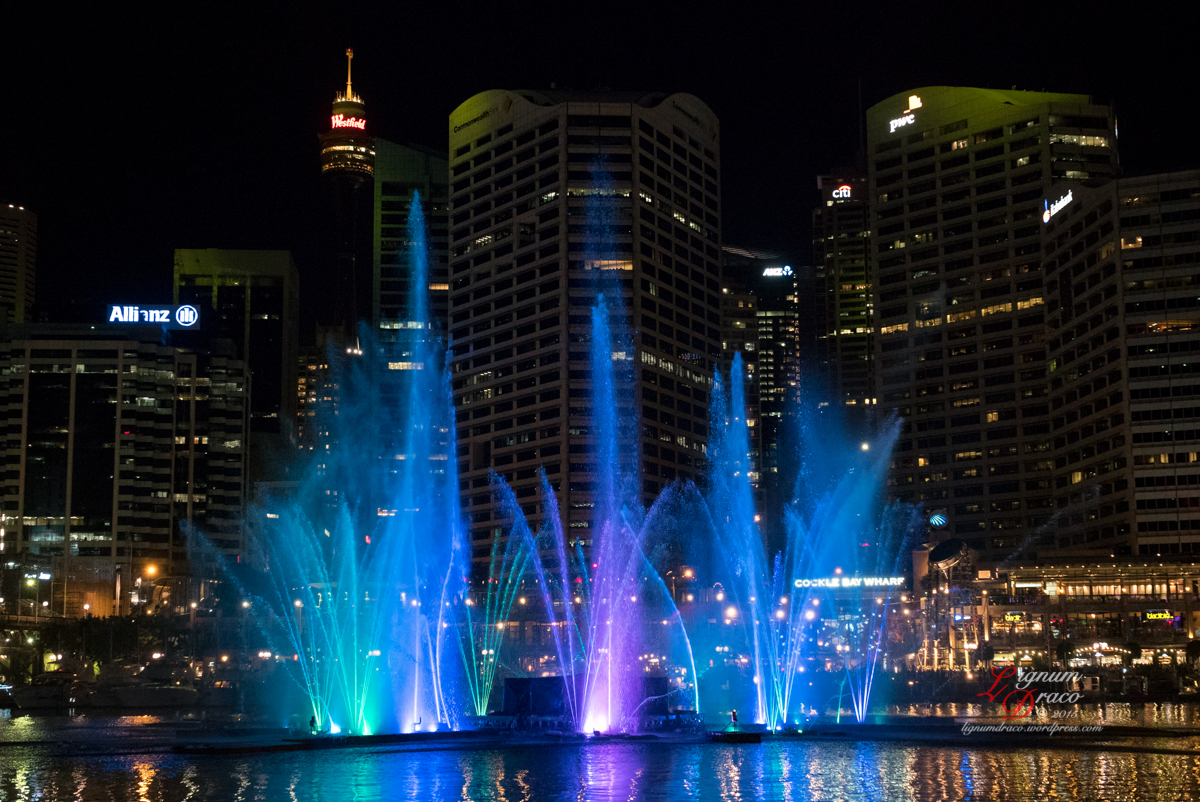 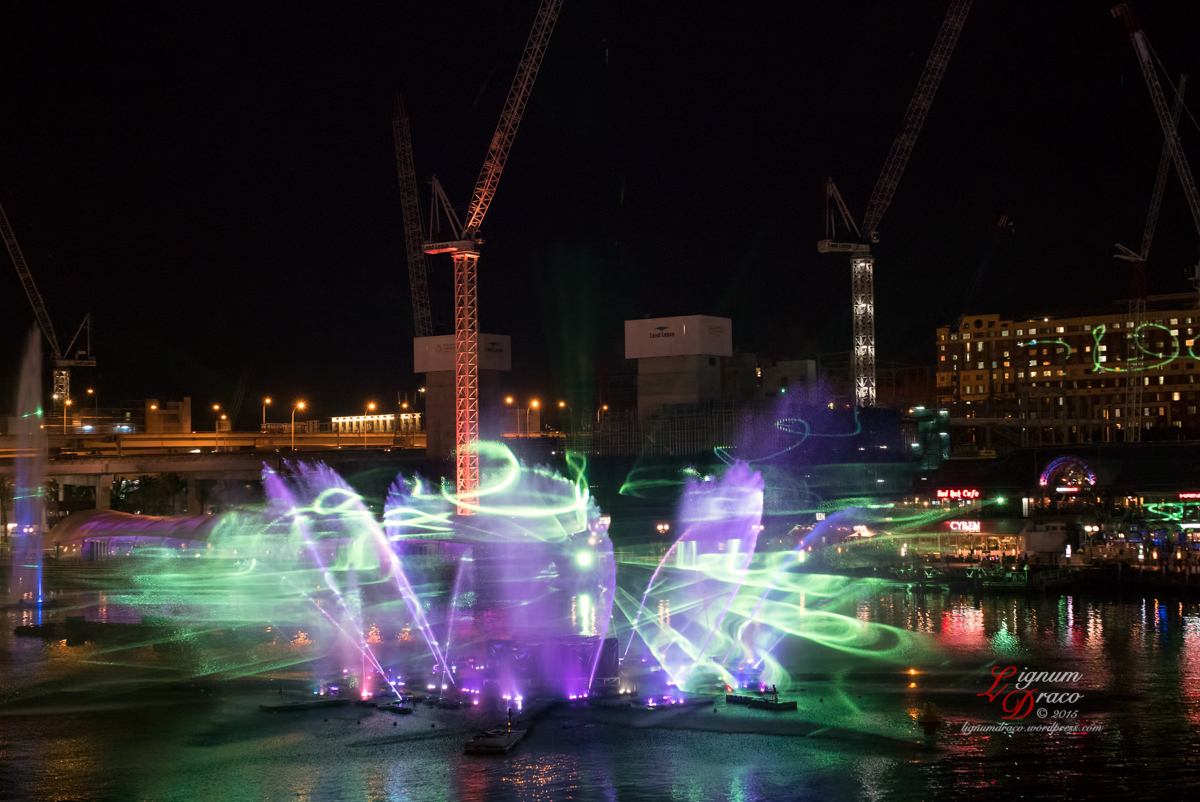 Each show was time-coded to musical sound tracks created by Sydney electronic music gurus, the Presets. This last one was timed well to the chords of Deep Purple’s Smoke on the water. 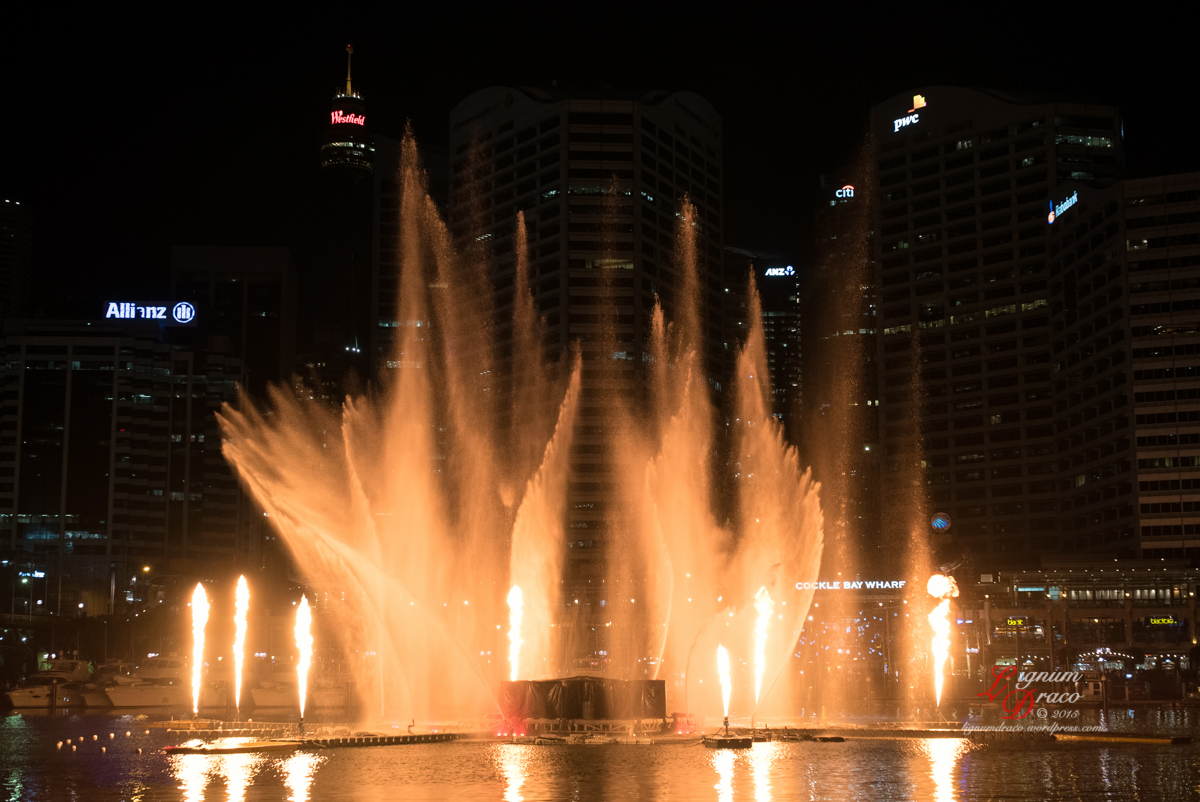 There were least 3 different shows with one playing every half hour from 6pm to midnight. Certain performances had added fireworks. Selected scenes from 3 of the shows I watched have been presented. 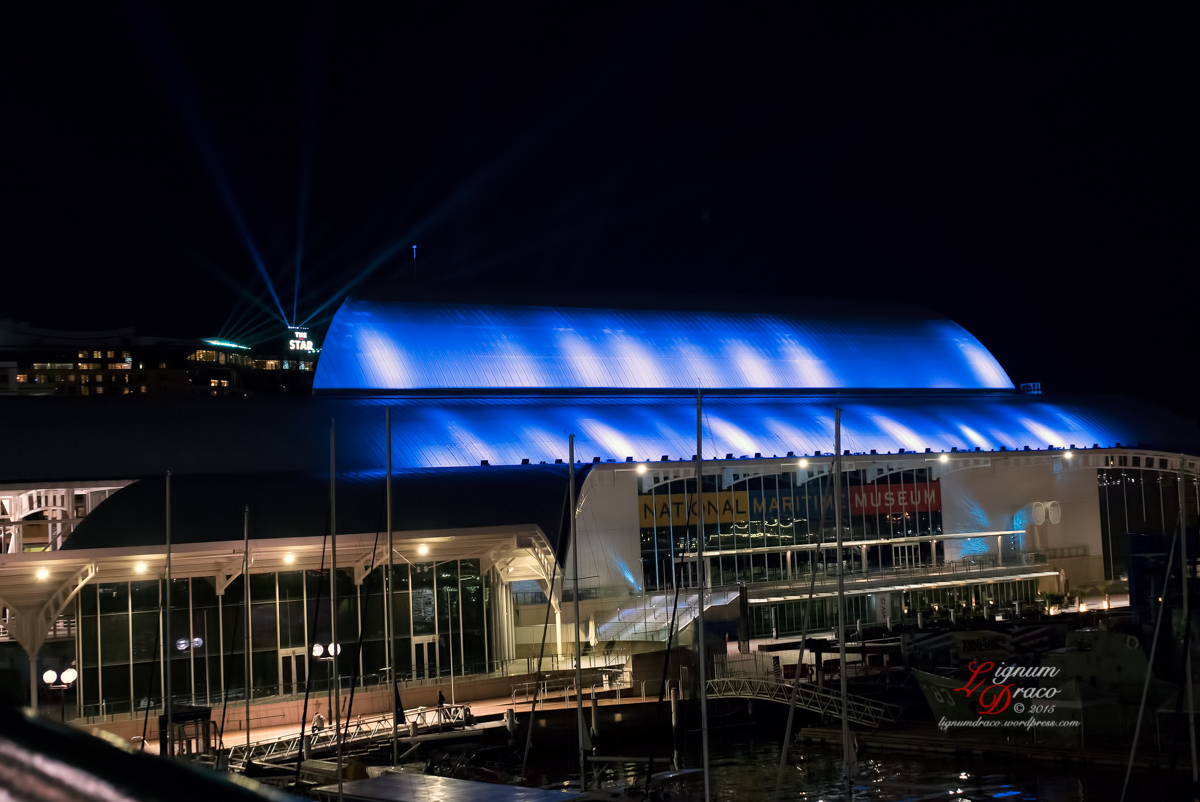 Polar Lights was a display on the Maritime Museum’s expansive 1,700m2 rooftop which was transformed into a cool, bold light show, influenced by the colour pallet of the sea, sky and ice found in Antarctic exploration.

This year the area of Pyrmont around and in the Star casino was transformed into an interactive game zone. I didn’t go into the casino to look at the game zone area, but outside… 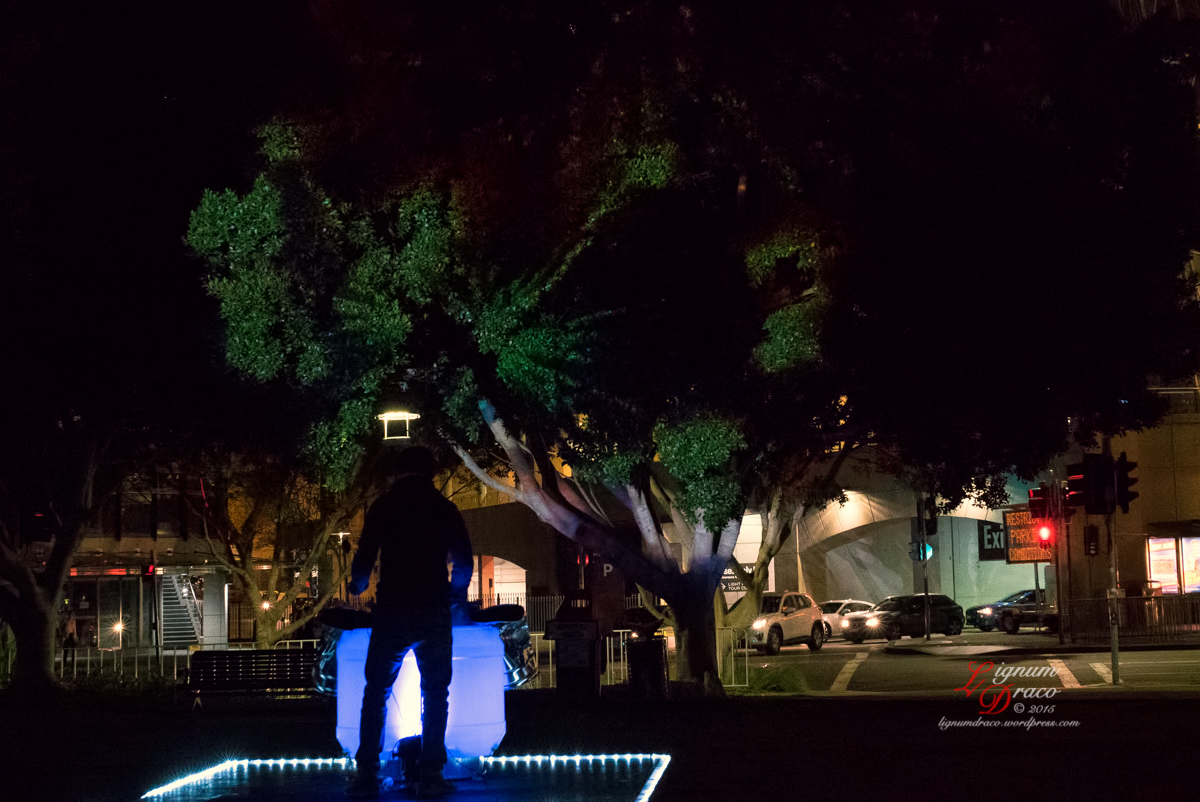 Pyrmont Pyro, located in Pyrmont Bay Park, allowed you to take control of your very own digital fireworks display onto trees via the beat of glowing drum sticks that transformed both the projection and sound display. There were about 10 of these drums lined up in front of the local trees. 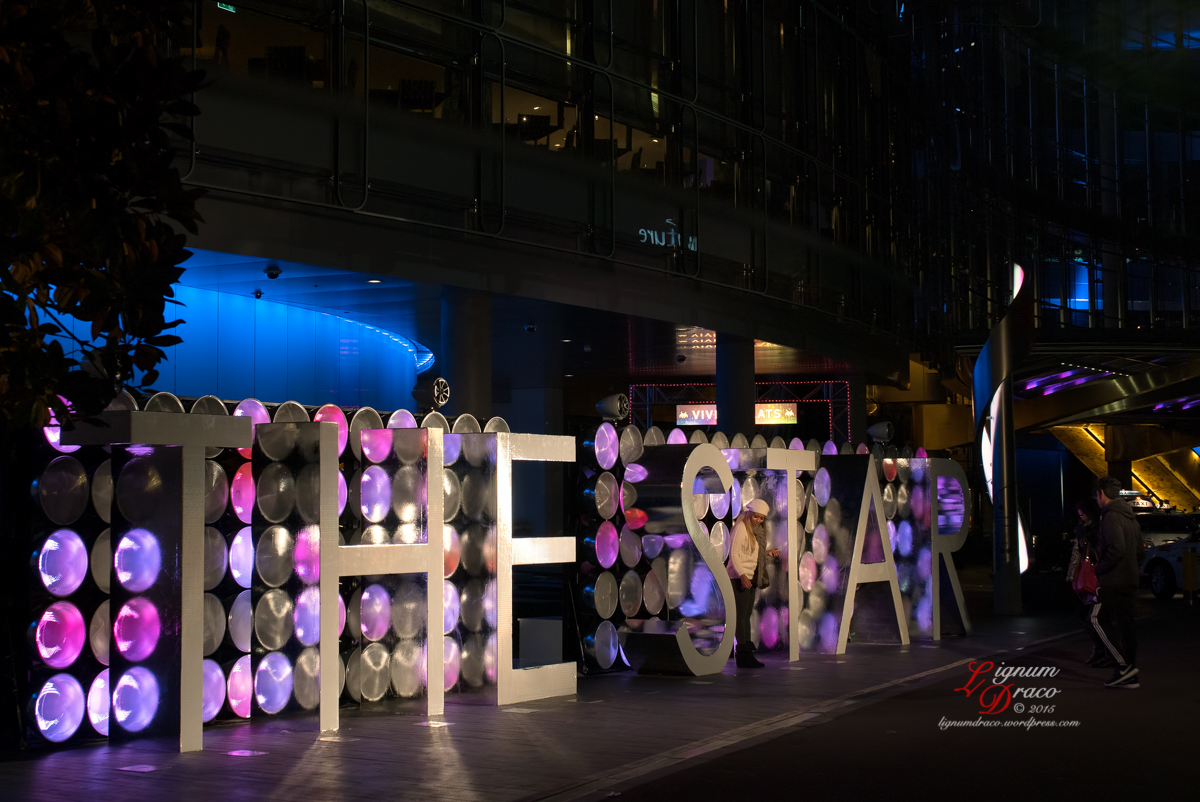 For VIVID, The Star Letters were synced with music and lights. 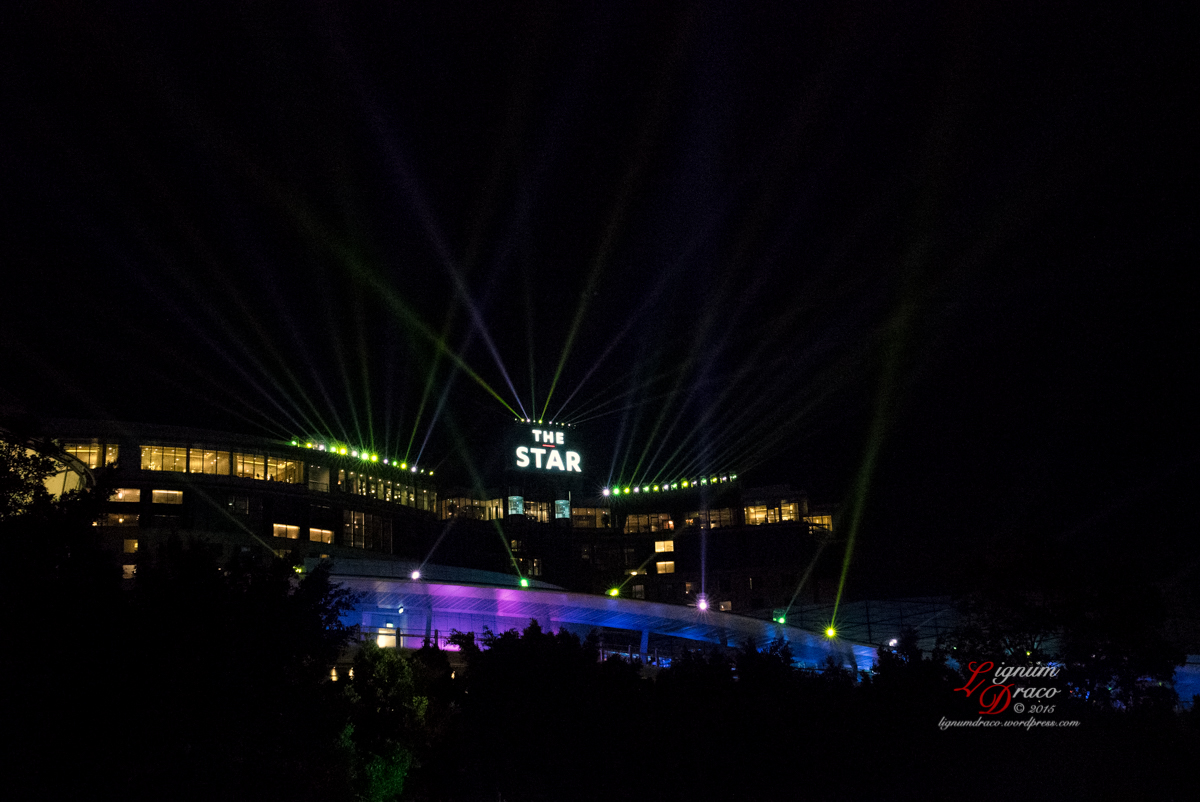 Mission Control was a studio booth outside the casino. Step inside, choose your music then create your own light show, choosing the pattern of lights and lasers projected from the roof of the casino. You may as well dance too because you and the light show were recorded.

For most people, Winter is the off season for visiting Sydney. I’ve long suspected VIVID was a clever trick to get people to visit Sydney in Winter and go out at in the cold night air. I’m sure I’m right.

For the next part of this series, we go where VIVID has not gone before. We turn north and go across the harbour.
…

All my photography from this and previous years of VIVID Sydney going back to 2012 can be found here.