The mural above was painted illegally in 1991. The artists, Juilee Pryor and Andrew Aitken had twice asked for permission to paint it but were refused. They did it anyway, and surprisingly weren’t stopped by anyone as they did so. According to Juilee the mural reflects three themes from the 20th Century: gender equality, environmental activism and civil rights.

In 2014, the local council commissioned an independent report to assess the mural’s value and found it had “local historical, aesthetic and social heritage significance”. The mural is now heritage listed. How times change, or do they?

The problems in the themes depicted in the mural continue to burn our modern world.

“We Didn’t Start the Fire” is a song by Billy Joel. Its lyrics include brief, rapid-fire allusions to more than 100 headline events between 1949, the year of Joel’s birth, and 1989, when the song was released on his album Storm Front. The song was written in response to a 21 year old who claimed that life as a youngster was tough in modern times, whereas life was easier in the fifties during Joel’s youth, because “nothing happened in the fifties”. 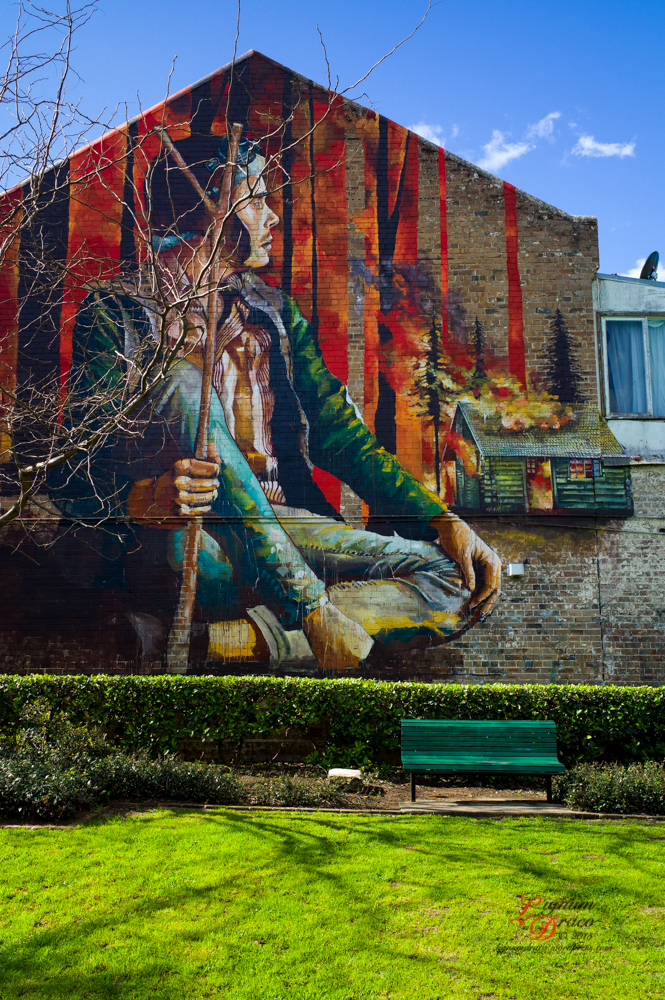 “Some men just want to watch the cabin burn”

Following the clean up of a small park, a local resident thought it would be nice to complete the transformation of the area by having a large mural painted on the side of the house next to the park. A letterbox drop of local residents raised $2000. Australian born Fintan Magee was commissioned and the above mural is the result. It’s amazing what a little grassroots community support can achieve. I like how the council are keeping the hedge well manicured beneath his feet level.The title of the mural is an adaptation of the line from the Batman movie, where Michael Caine as Alfred explains to Bruce Wayne, regarding The Joker, that: “Some men just want to watch the world burn”.

Watch out, you might get what you’re after
Cool baby, strange but not a stranger
I’m an ordinary guy
Burning down the house

“Burning Down the House” is a song by new wave band Talking Heads, released as the first single from their fifth studio album Speaking in Tongues.

Fintan’s work is scattered around Sydney and the world. I didn’t realise it at the time but the telephone line mural which I previously photographed was also painted by him. I was hoping someone would come along and sit on the bench smoking a cigarette, or dressed as a clown, but it wasn’t to be. No, actually, I’m glad no-one came along dressed as a clown.

67 thoughts on “We didn’t start the fire”