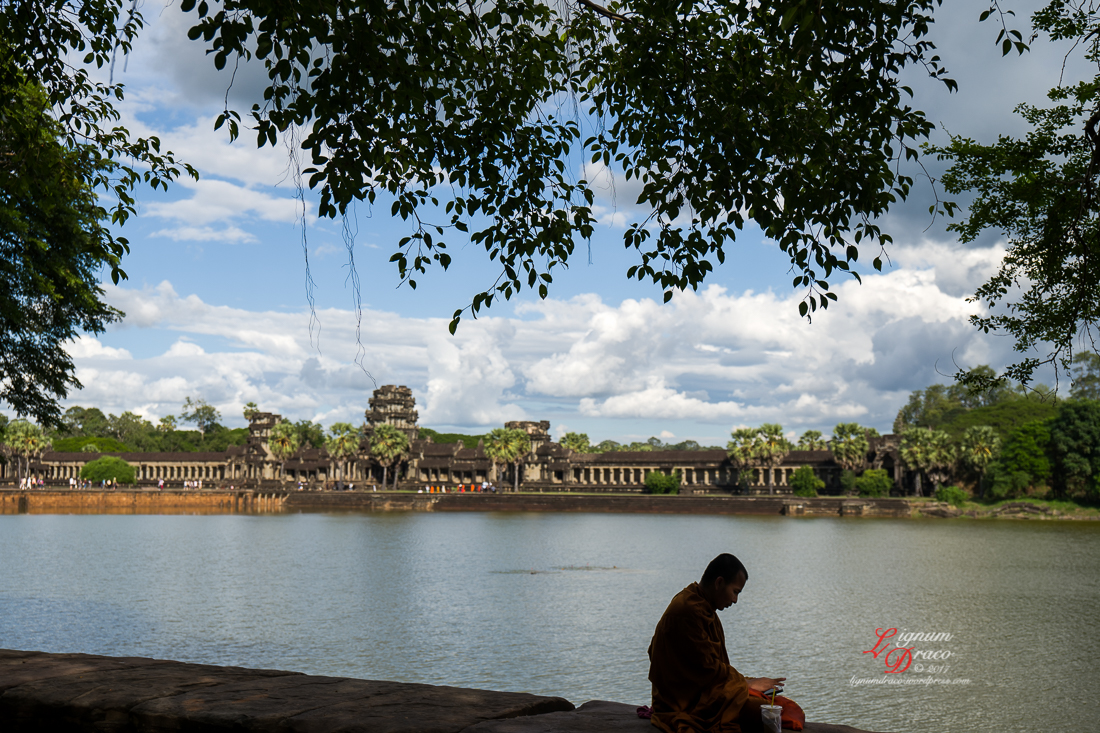 I suspect almost everyone who visits Siem Reap ends up going to Angkor Wat.

Angkor Wat is a walled temple complex in Cambodia and the largest religious monument in the world, with the site measuring 162.6 hectares (1,626,000 m2; 402 acres). 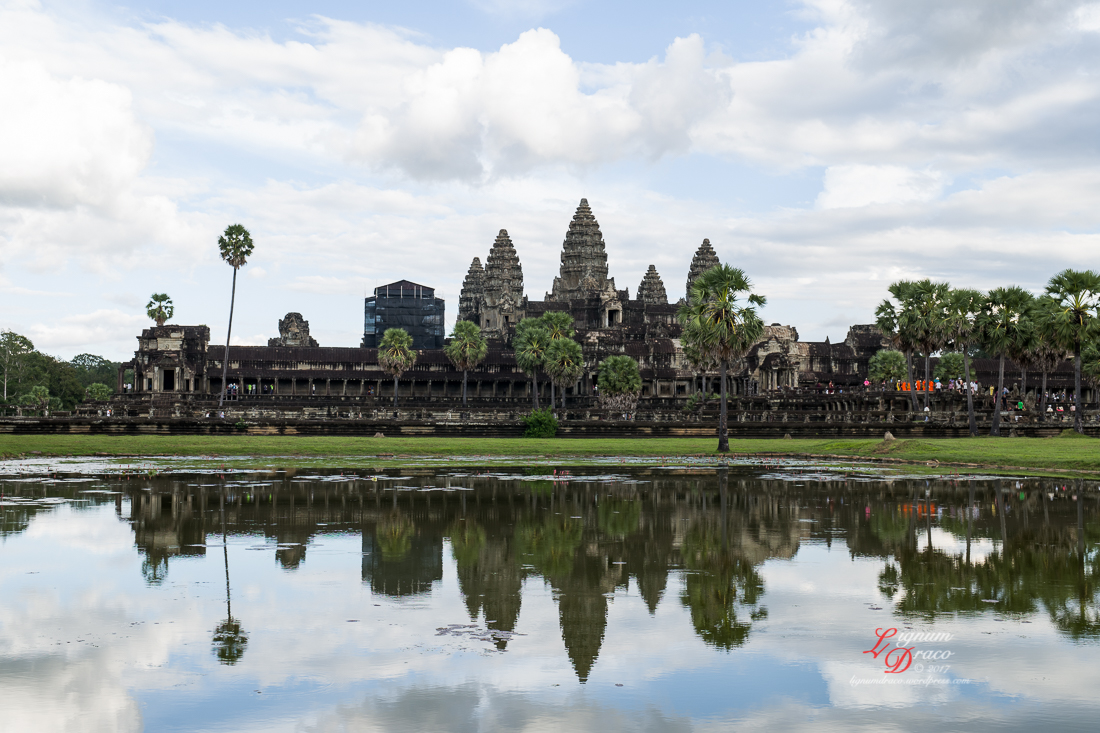 Across a wide moat and beyond the outer wall, you enter the grounds of the temple and proceed to the central complex. The small lake outside the central temple complex affords the typical picturesque views. 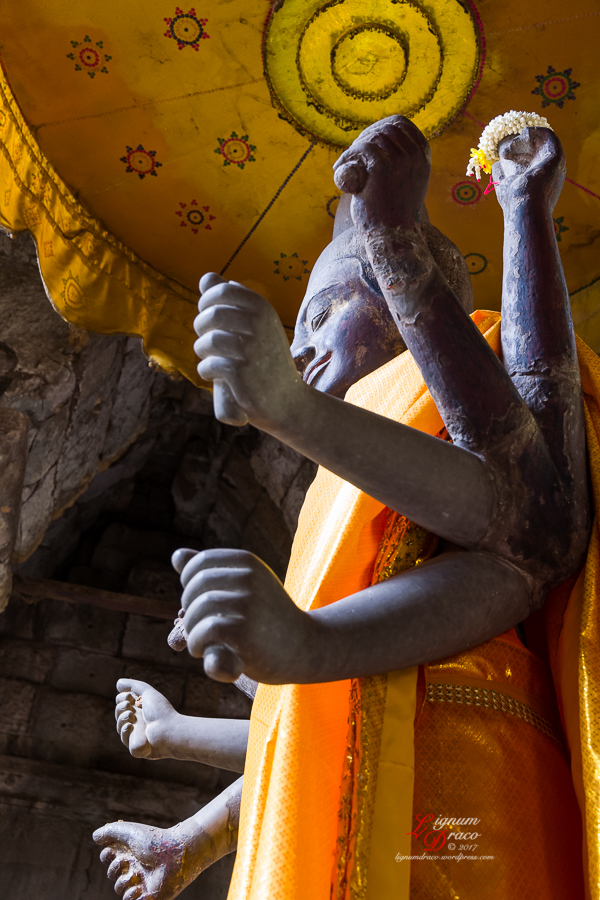 It was originally constructed as a Hindu temple for the god Vishnu, gradually transforming into a Buddhist temple towards the end of the 12th century. It was built by the Khmer King Suryavarman II in the early 12th century as his state temple and eventual mausoleum. As the best-preserved temple at the site, it is the only one to have remained a significant religious centre since its foundation. 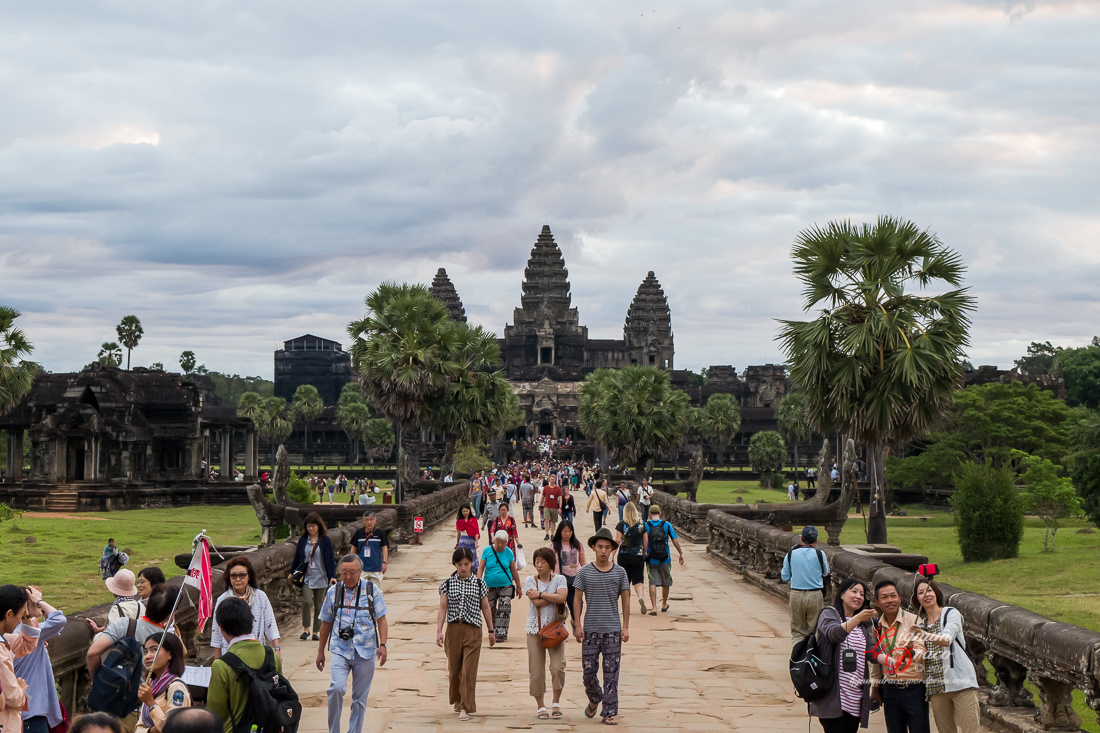 Angkor Wat has become a symbol of Cambodia, appearing on its national flag, and is almost certainly the number one tourist attraction of the country. There were over 2 million visitors in 2015 and rumours exist online that a cap may eventually be placed on visitor numbers to preserve the site. 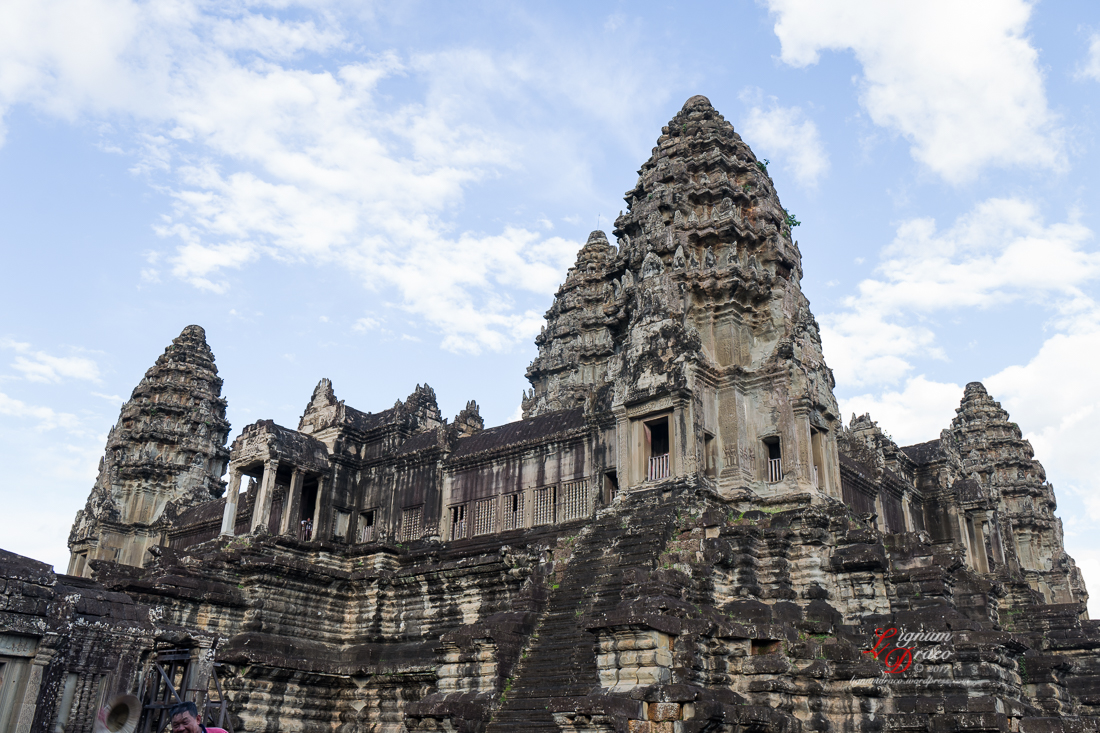 Angkor Wat combines two basic plans of Khmer temple architecture: the temple-mountain and the later galleried temple. It is designed to represent Mount Meru, home of the devas in Hindu mythology: within a moat and an outer wall 3.6 kilometres (2.2 mi) long are three rectangular galleries, each raised above the next. At the centre of the temple stands a quincunx of towers. Unlike most Angkorian temples, Angkor Wat is oriented to the west; scholars are divided as to the significance of this. The temple is admired for the grandeur and harmony of the architecture, its extensive bas-reliefs, and for the numerous devatas adorning its walls.

In deference to the significance of this site, no building in Siem Reap may be built higher than the tallest point of Angkor Wat. 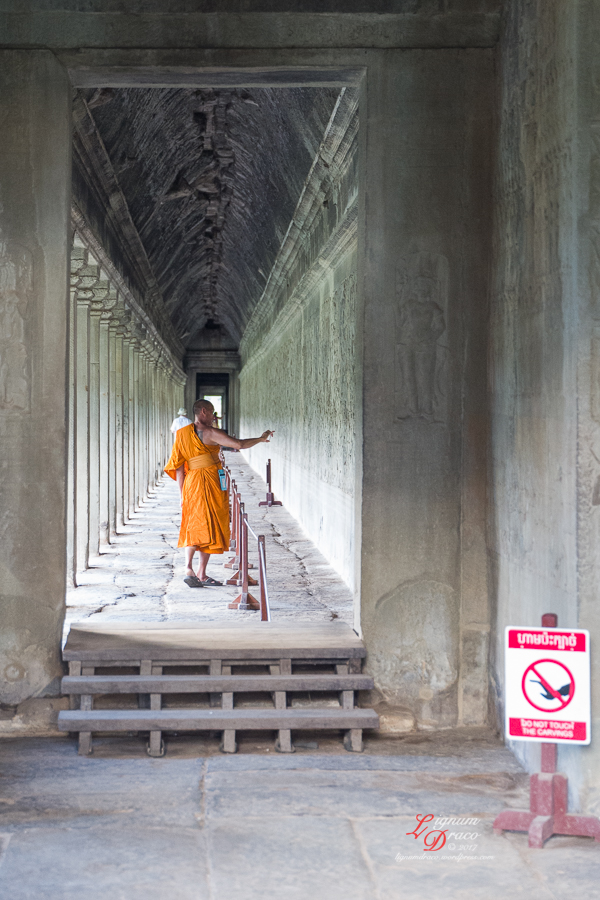 Daily, quite a few of the visitors are Buddhist Monks, many from Thailand from what my guide told me. 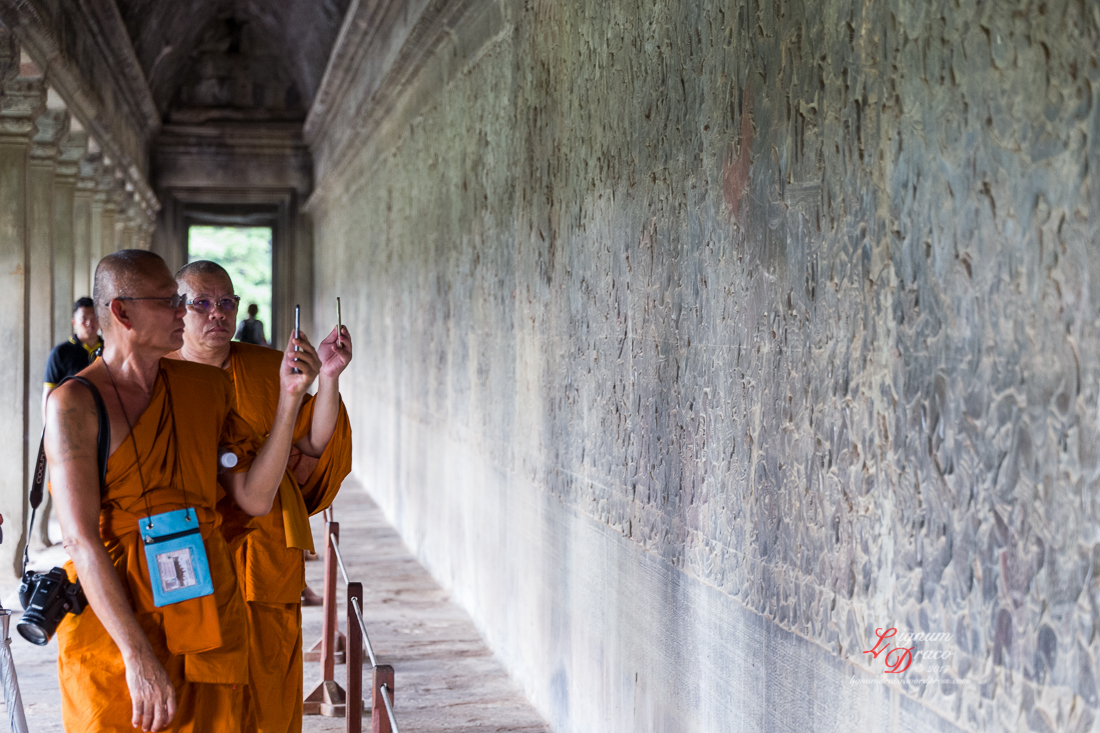 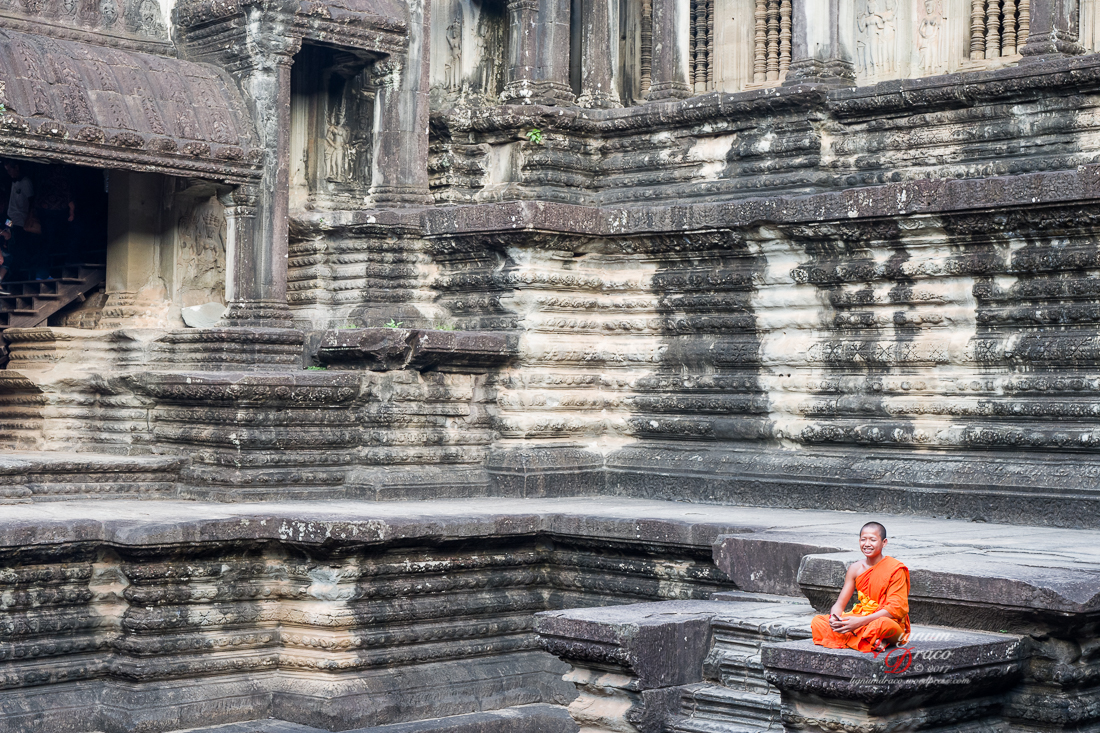 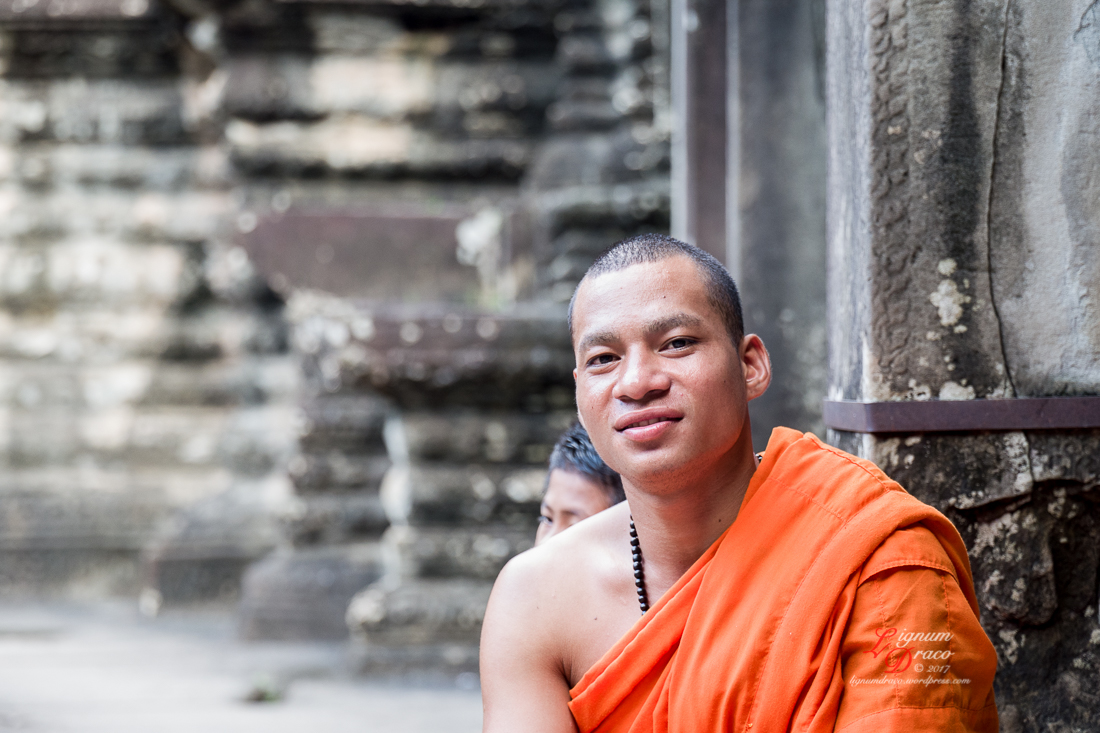 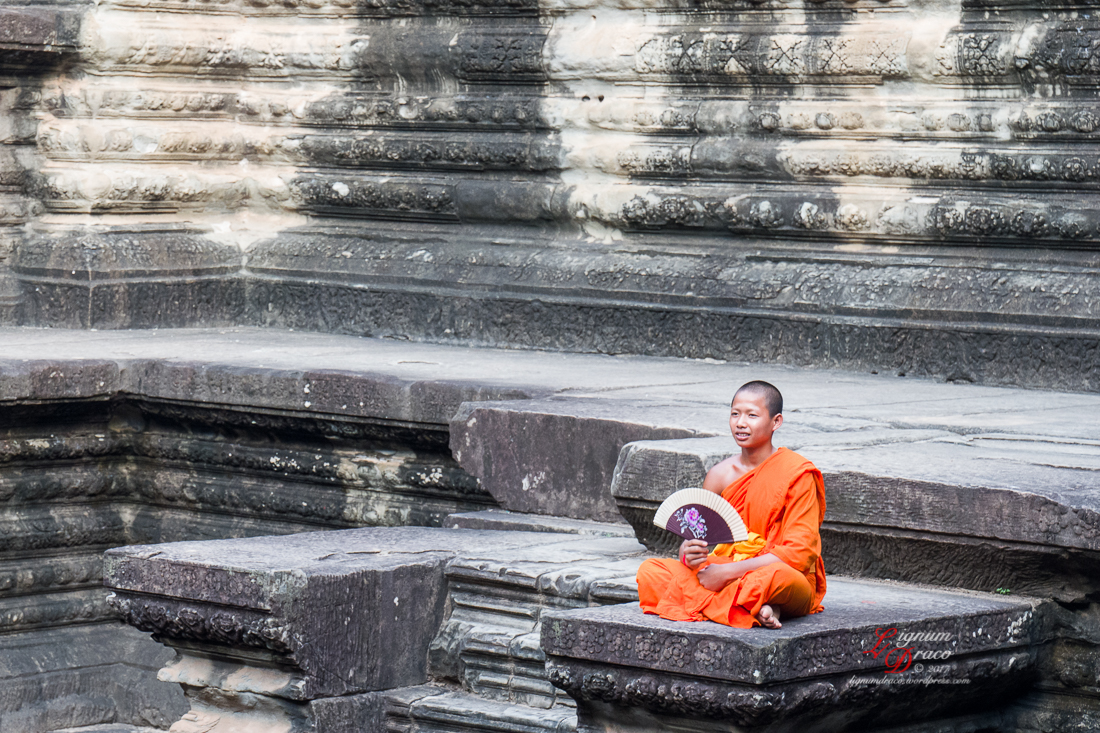 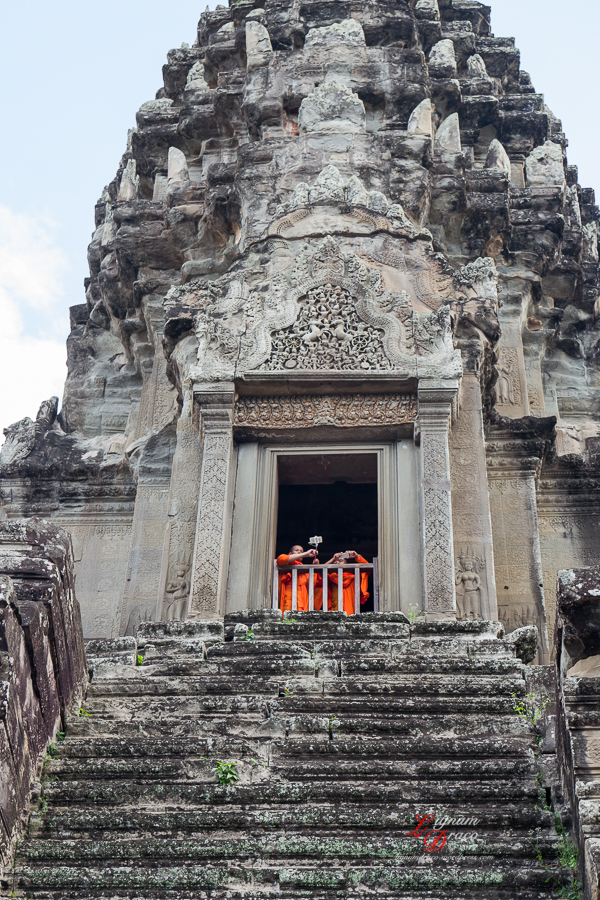 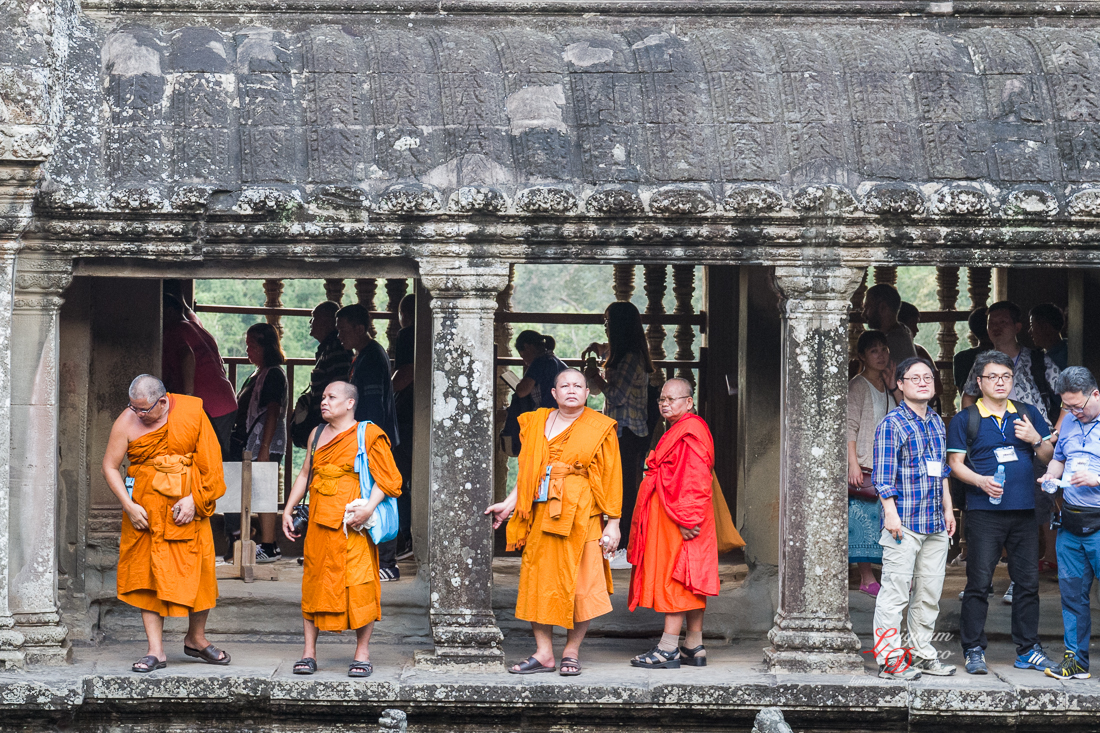 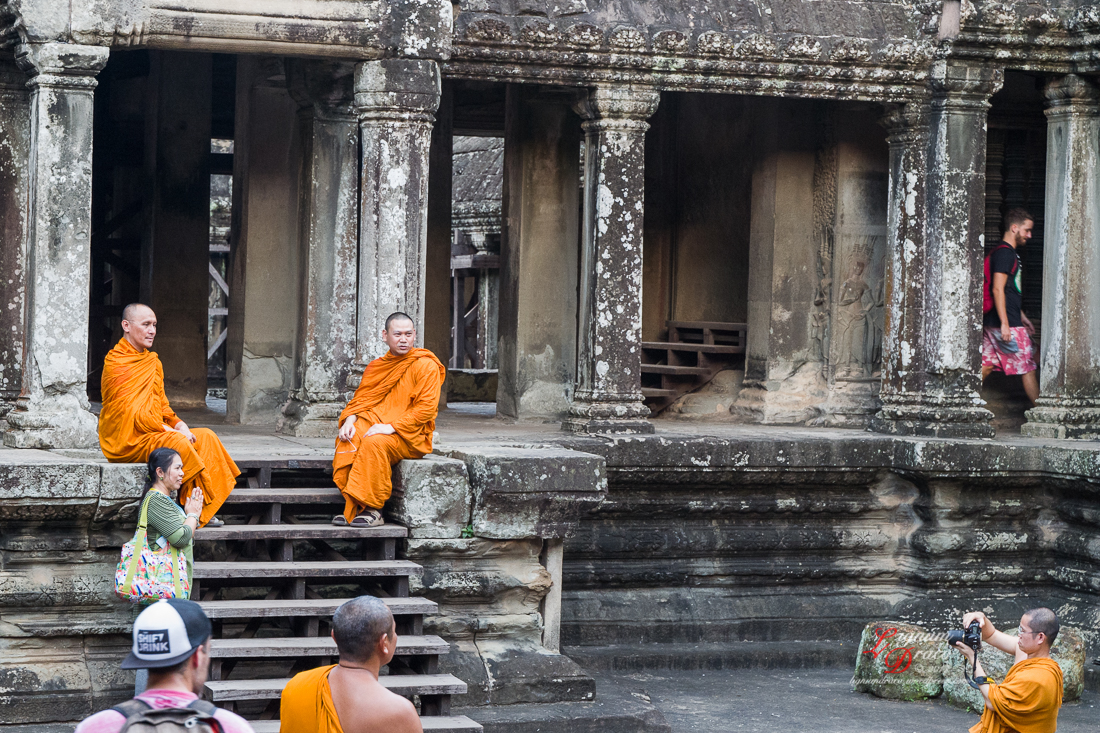 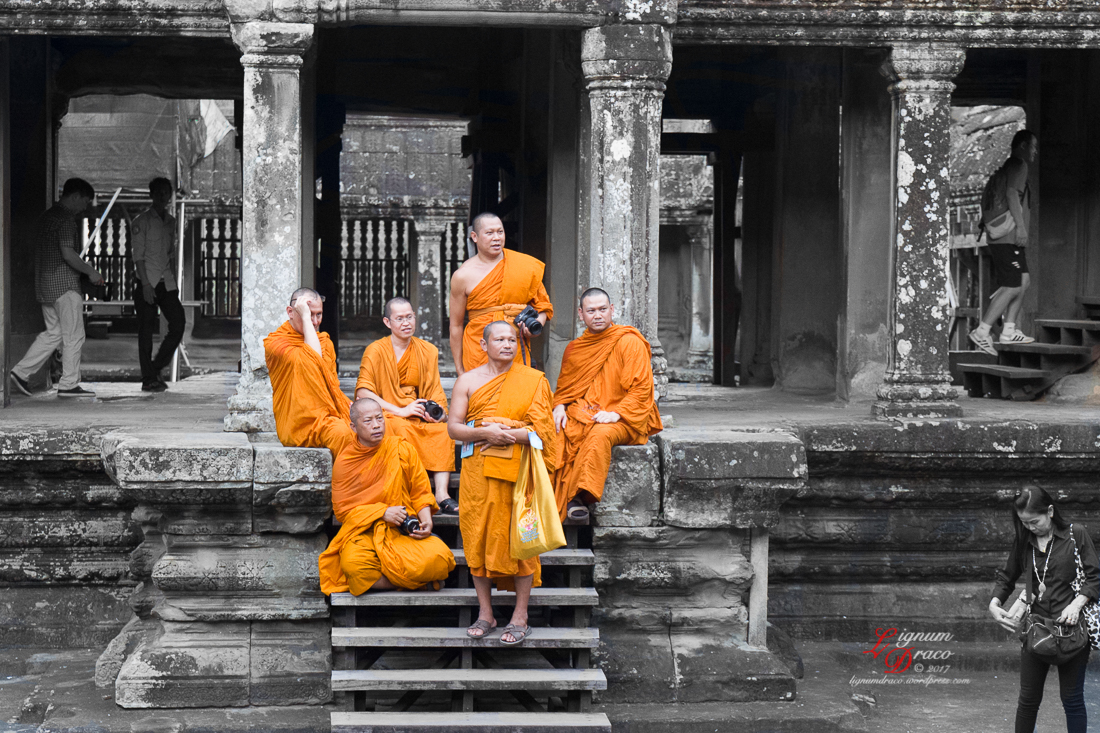 One expects to see Buddhist Monks when visiting Angkor Wat. Afterall, it has a great religious significance. But I was kind of surprised to see many of them had mobile phones, selfie sticks and DSLR cameras.

This is my contribution to the topic of “Unusual” on this week’s Weekly Photo Challenge. The guest host just happens to be me. 🙂 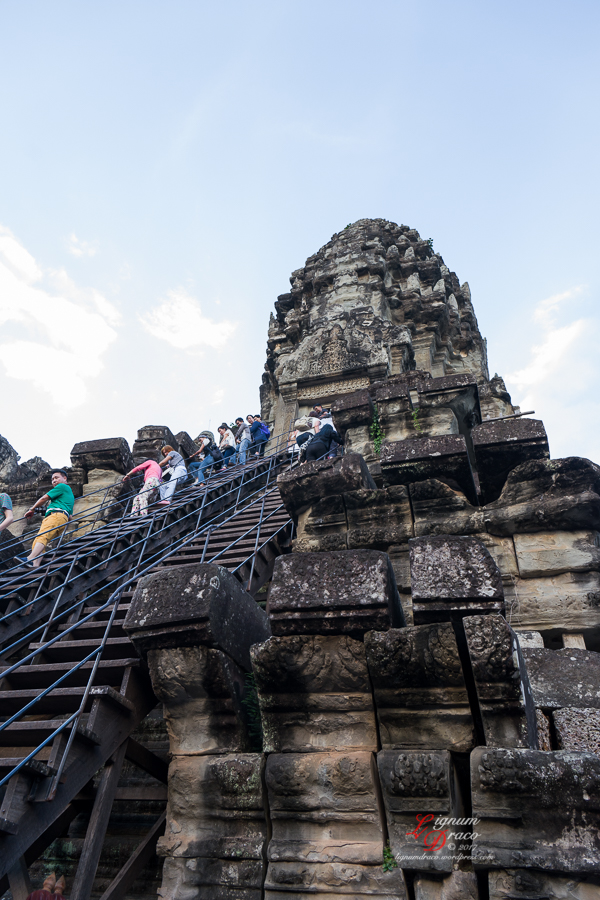 The steep climb up is no trouble for most. However the same can’t be said for the descent. I really feel sorry for the woman a few behind me who started crying and completely froze after going down only a couple of steps. With coaxing, she sat down and gradually descended, on her bottom, sitting and stopping on every step along the way. 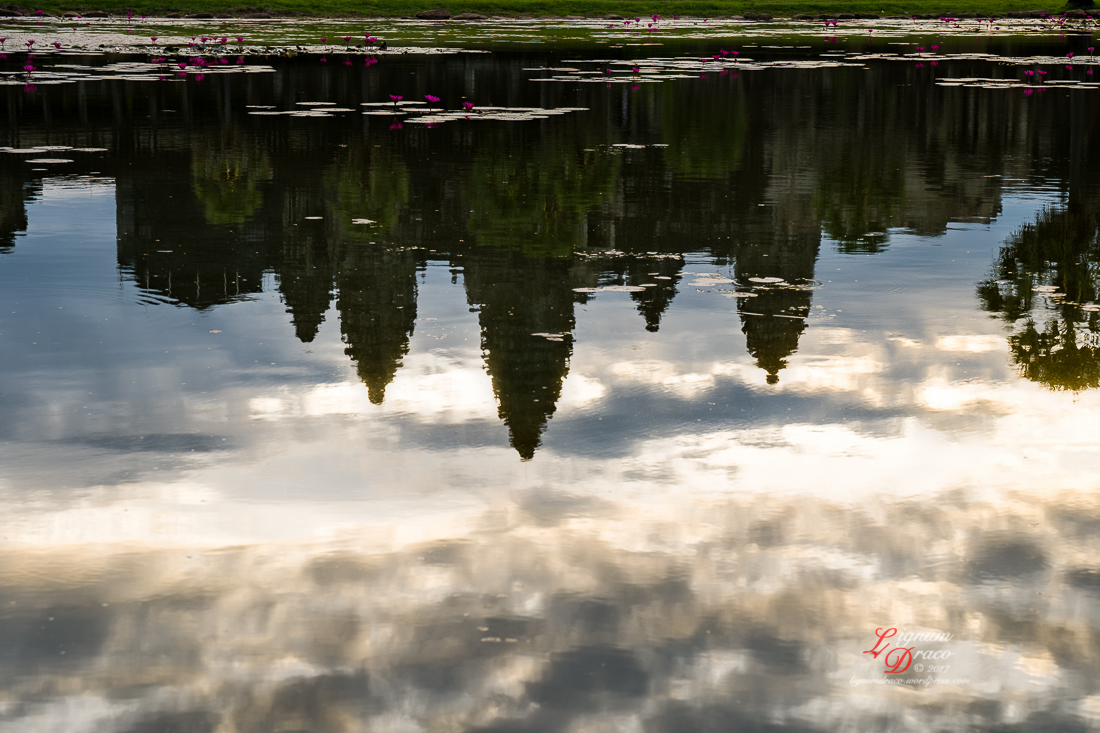 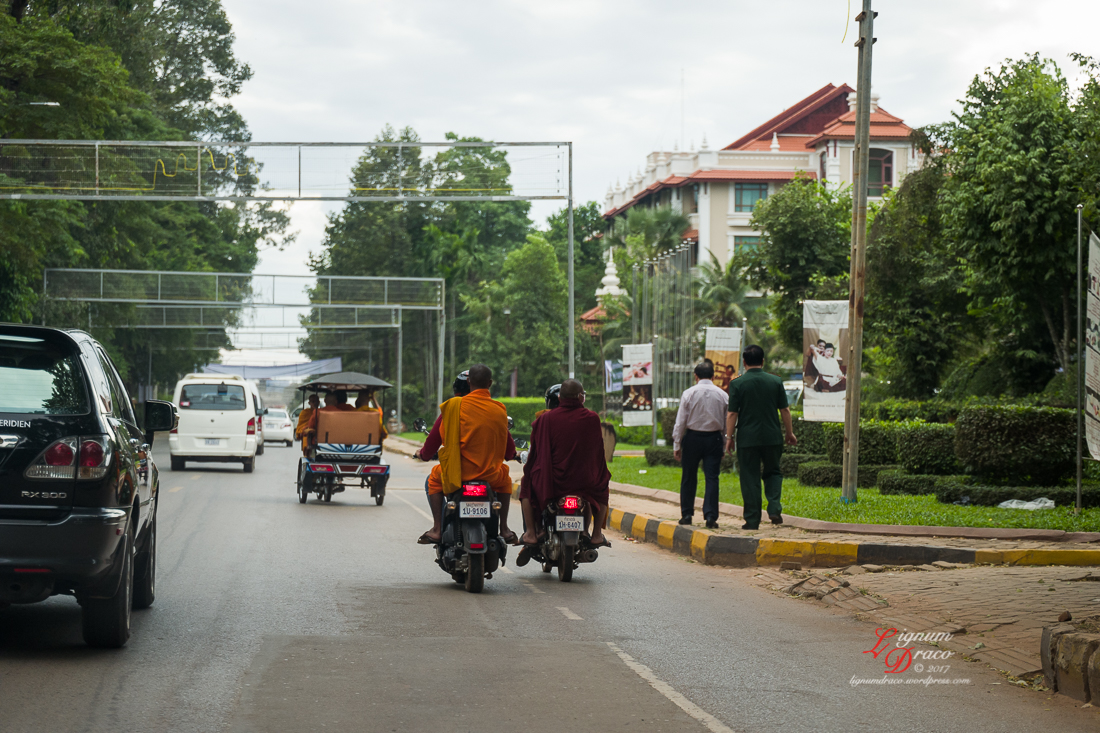 Of course, after a visit to Angkor Wat, most people head back into Siem Reap for food and drink. Pub Street is the popular spot for tourists. Not sure about these tourist monks of Angkor Wat, though. As they say, what happens on tour, stays on tour. 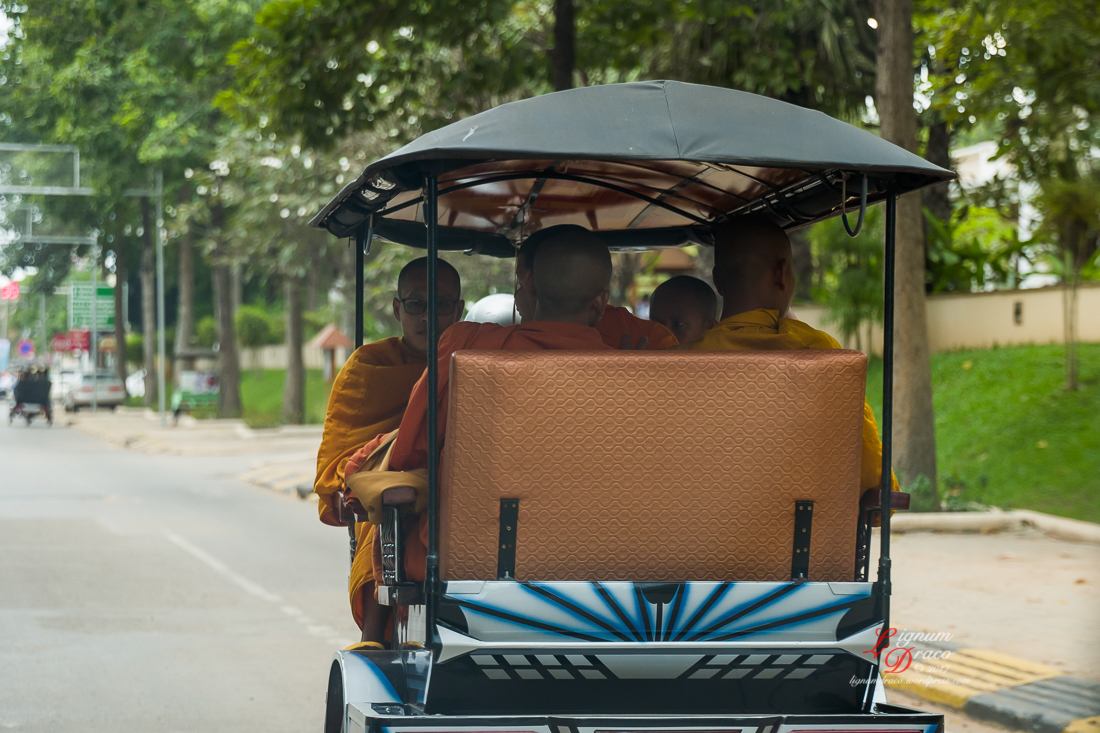 Please click the link to see my previous posts about Cambodia.

My photo series of Vivid Sydney 2017 is now over, having ended with a post about the main display on the Sydney Opera House, entitled Audio Creatures. I hope to complete a few more posts about my recent travels to Cambodia, New Zealand and within Australia over the next few weeks, but much of my spare time at the moment is taken up by planning and organising my next trip, and taking the time to learn some basics of a foreign language that should help me to blend in a little with the locals.

60 thoughts on “The tourist monks of Angkor Wat”