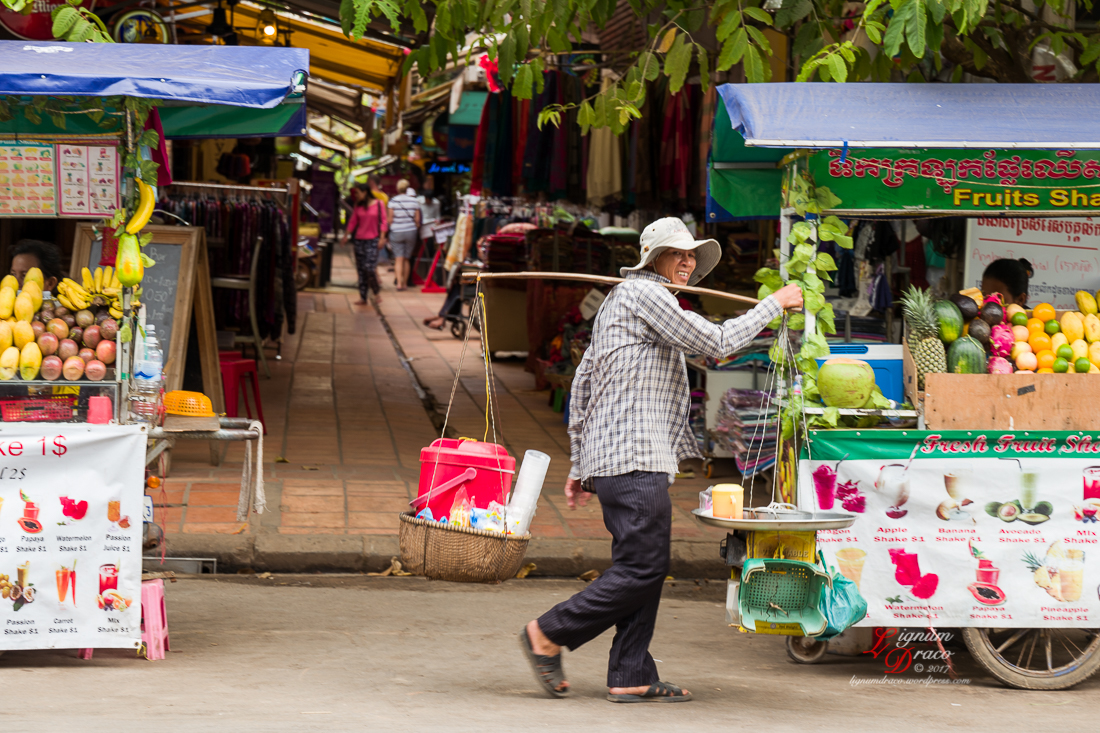 Siem Reap is the gateway to Angkor Wat and Angkor. The city is rapidly changing in response to increasing tourism and it’s character is being changed by tourism. There are areas where you will see more tourists than locals and there are other areas like local markets where tourists rarely go.

Wandering the streets of Siem Reap is a good way to experience the city and see an unusual mix of old and new.

Laneways one minute become kitchens and markets the next. 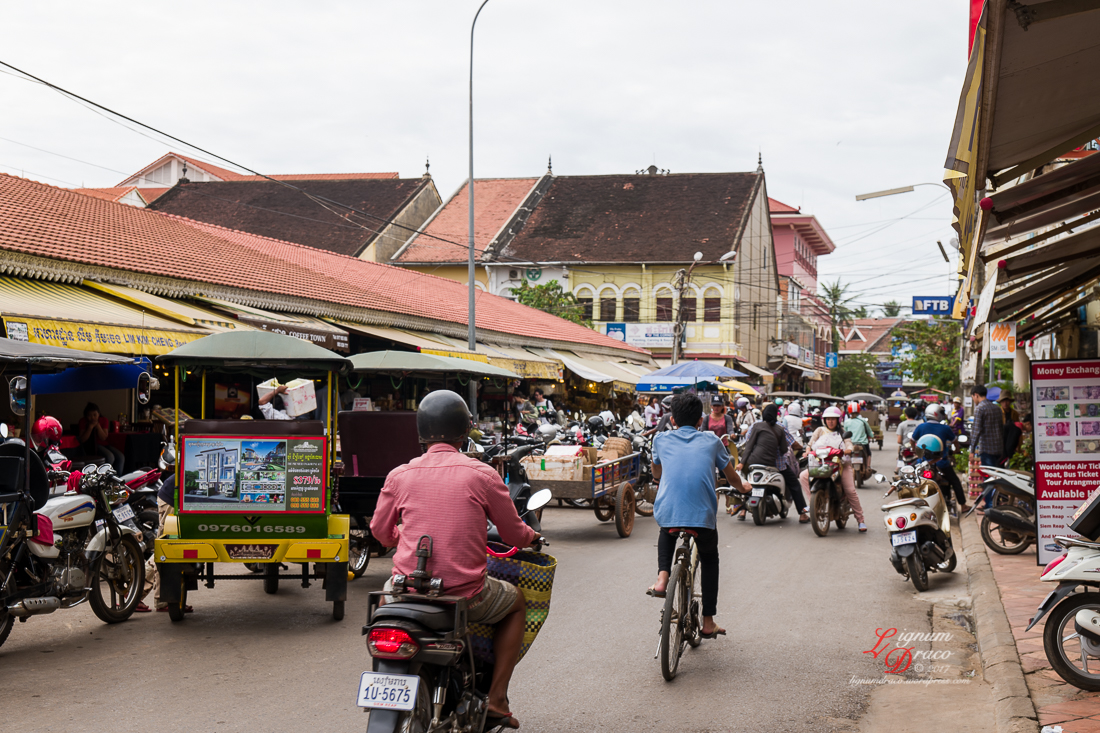 There’s a certain level of fascinating chaos on the streets there which you soon become used to. 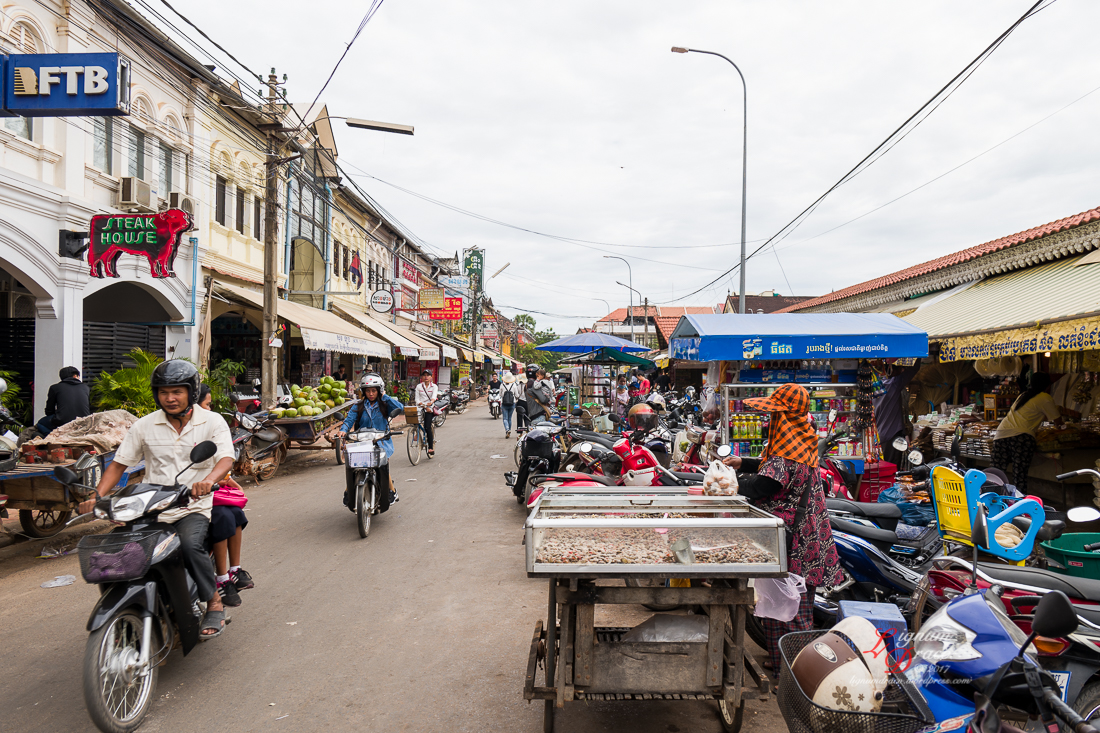 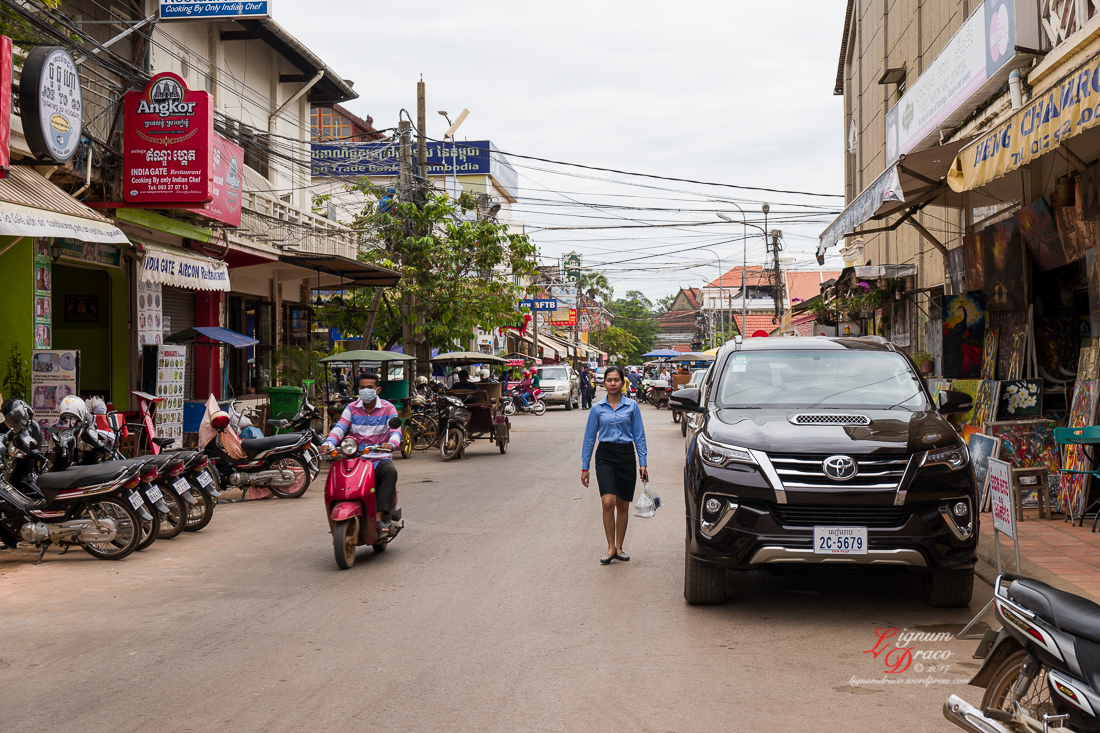 Footpaths are commonly used for motorcycle parking, store displays and tables with chairs, forcing pedestrians to walk on the street itself in many areas. 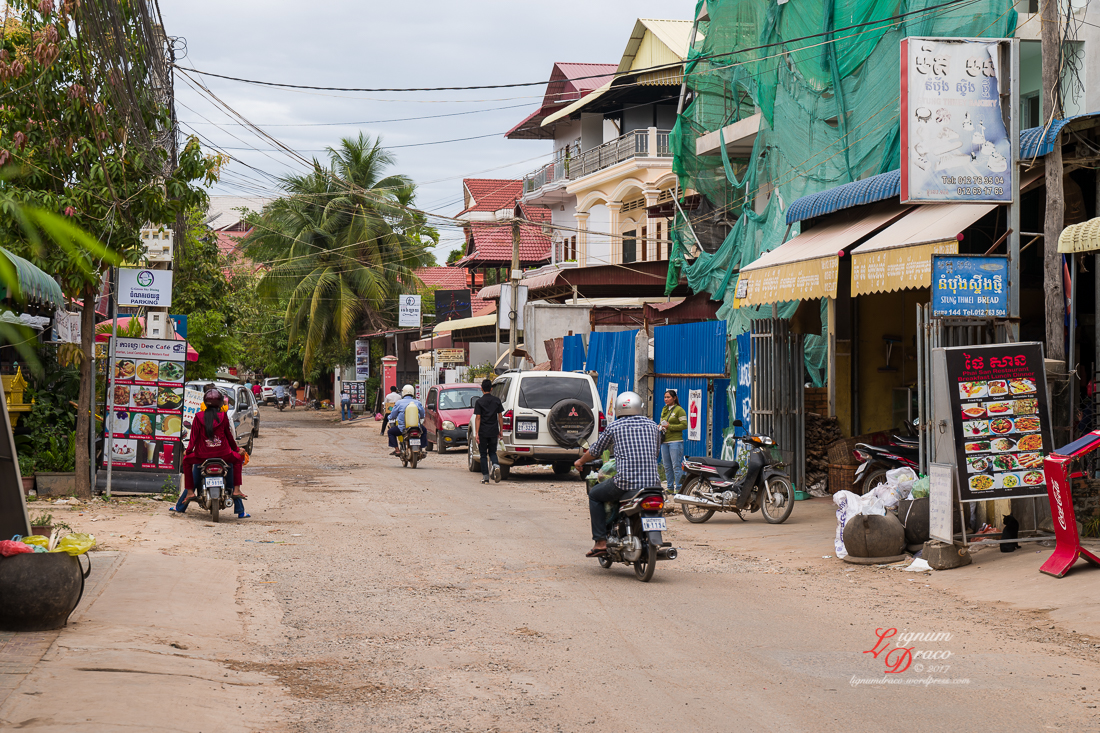 Off the main streets, smaller streets are often unsealed. I accidentally stumbled upon a nice small family restaurant on one of these small streets. Not the sort you’d find in a guidebook. The food tasted good, was cheap and I didn’t get sick.

After the first day, I soon realised that the best show in Siem Reap was the traffic on the road itself and I started shooting through the windscreen of my guide’s car on a regular basis.

Mostly, traffic keeps to the right. Above you can see a main road, with a central median strip. Supposedly everyone on the right of the median strip should be going forward. Supposedly.

There are only 4 sets of traffic lights in Siem Reap. Traffic seems to flow reasonably well without them. What I learnt from my usual tuk-tuk driver (Mr Rabo – he’s the greatest) was if there’s a gap, take it, regardless of what side of the road it is on. Sure, he rode over several kerbs and we almost got hit by other vehicles, but it was part of the experience.

Once you overcome the anxiety of potentially being in an accident, you can sit back and enjoy the show. I think the most I saw on any one motorbike was 5 people. 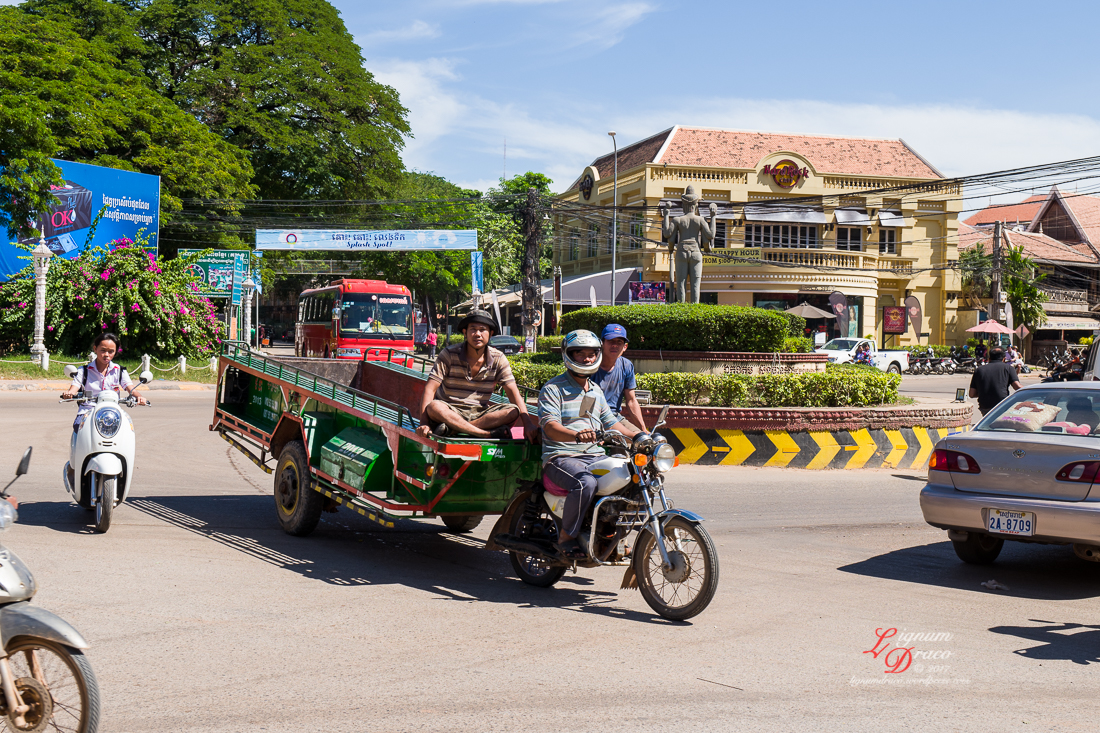 On my last full day in Siem Reap, I just stood at this roundabout for an hour or so and took photos of the passing parade. Coming from a country with strict road rules, this was quite an unusual sight. 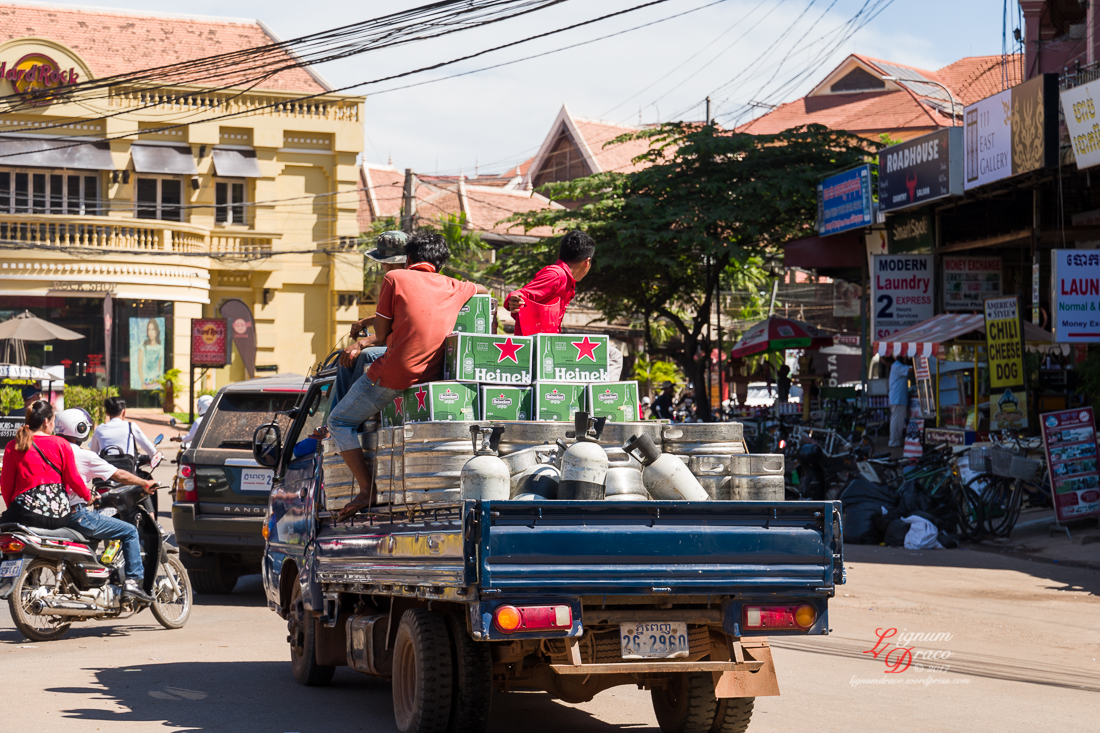 This week’s Weekly Photo challenge topic is UNUSUAL. The guest host is me.

At the time, I actually did think that little girl above was in control of the bike. It wasn’t the first time I’d seen that occur. 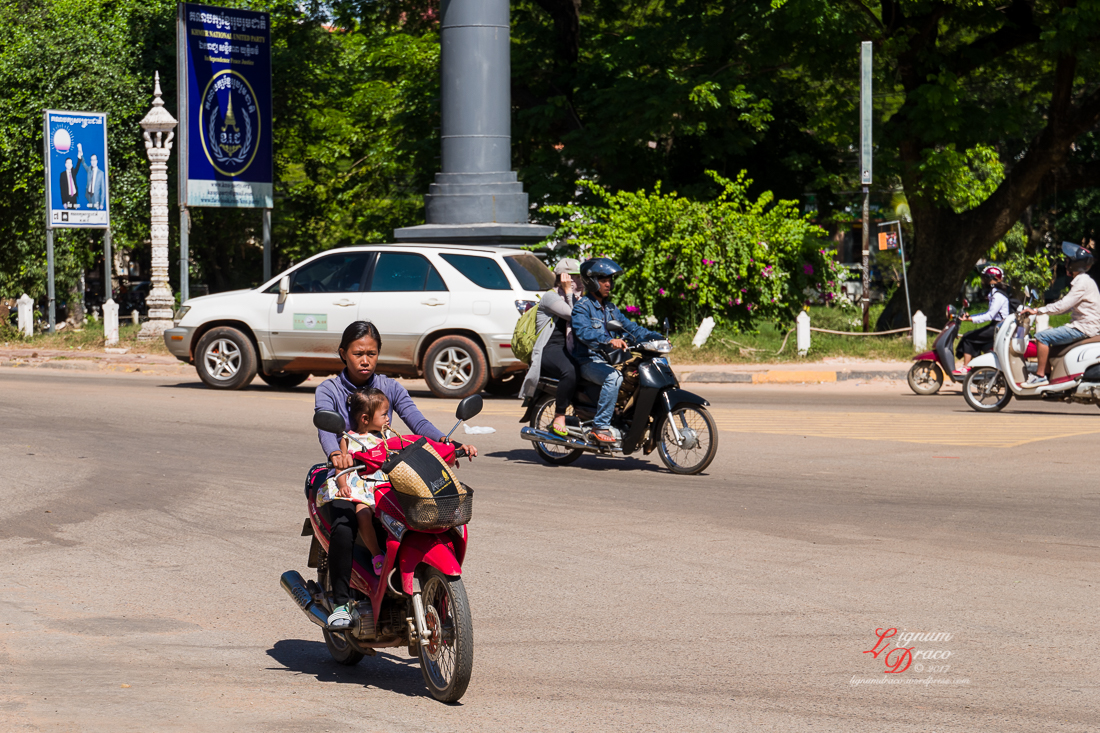 84 thoughts on “The streets of Siem Reap”