In the mid morning light, I saw the man above walking along the road. He was about to come up to a long yellow wall. His shadow caught my eye. I ran ahead of him to the other side of the road and started photographing him as he passed the yellow wall. He kept walking but every 5 or 6 steps he’d turn to look at me. Each time I would motion with my hand for him to keep walking and I kept photographing. I said nothing.

When he got to the end of the yellow building I came quickly across to speak to him. I said “Muchas gracias. Soy de Australia” and handed him a CUC$5 note as I shook his hand. A couple of the locals on the street who’d been watching me gave me a smile and a thumbs up sign. I proved I wasn’t taking advantage of him.

The Young Communist League (Spanish: Unión de Jóvenes Comunistas, UJC) is the youth organization of the Communist Party of Cuba. Its membership is voluntary and counts more than 600,000 active members. Its symbol shows the stylized faces of Julio Antonio Mella, Camilo Cienfuegos and Che Guevara. The motto is Estudio, Trabajo, Fusil and means “Study, Work, Rifle”. I waited but no-one walked by unfortunately. And gratefully no-one appeared with a rifle.

A view from the roof of my casa particular (private homestay) in Trinidad. In the distance you can see a crane. Outside of Havana, I think this was the only crane I saw in the towns I visited. Transformation and progress does not come quickly in Cuba. 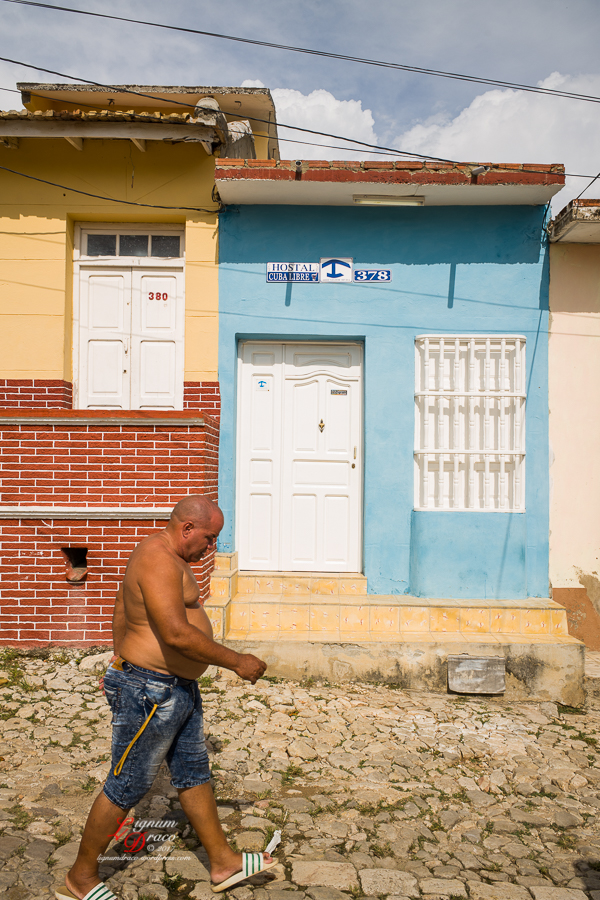 I enjoyed walking out of the main parts of town and getting into the less touristy and more grungy areas. There seemed to be a lot of casas and hostels in such areas of Trinidad, such as the Free Cuba Hostel. I wonder how many guests they get?

“We have eggs, but not much else”

A glimpse inside a grocery store. Obviously plenty of hens in this area but most of the other shelves are threadbare. I count 4 tubes of toothpaste on the middle shelf. 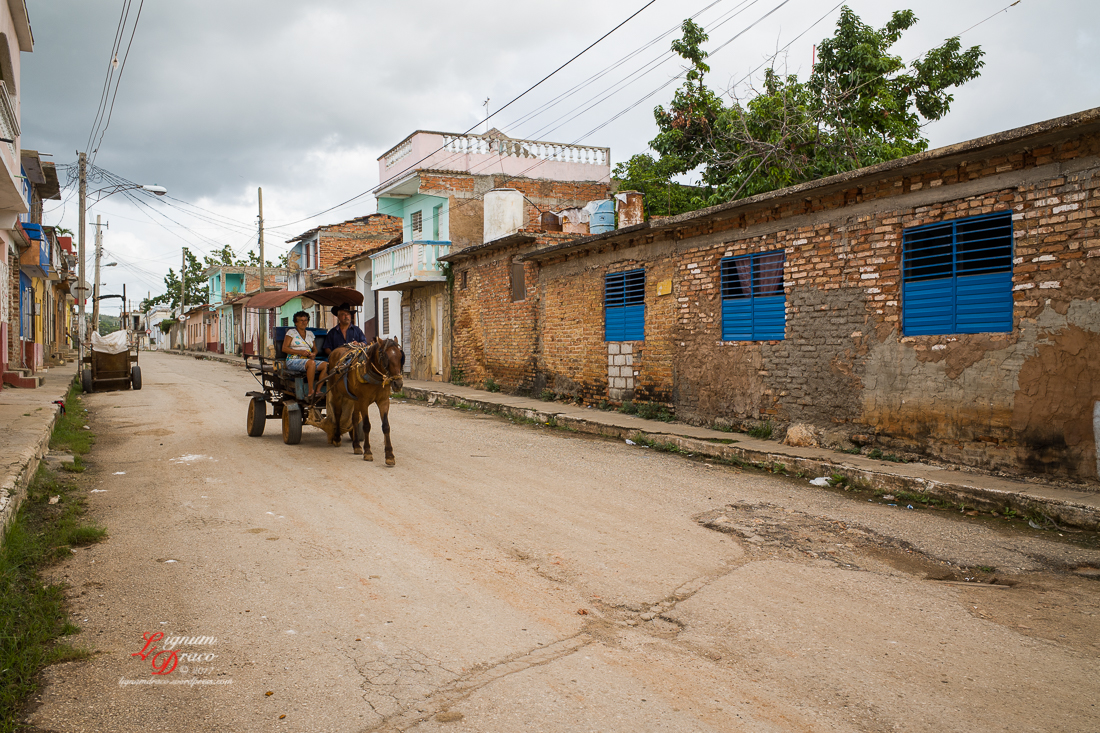 As you can see in the background, it’s quite common in Cuba to see men with their shirts/singlets rolled up to their chest. I guess it’s a way to beat the heat. 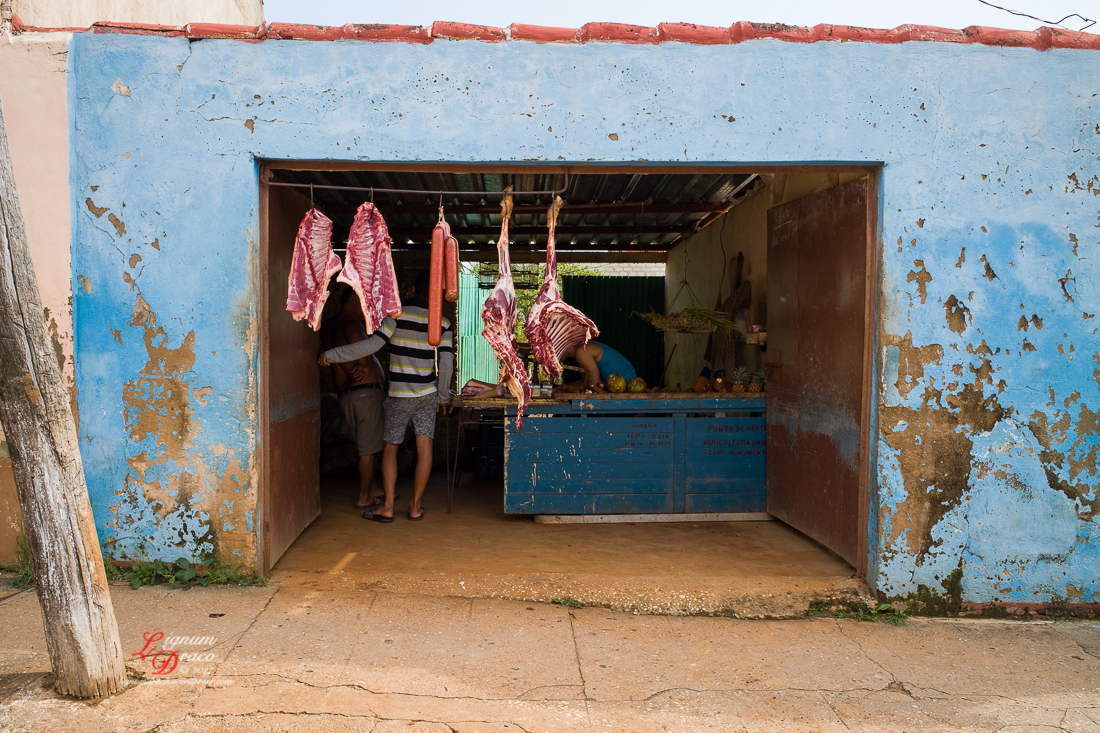 “Woman sitting in a chair looking at me”

Even in the grungy areas of town, people were very friendly. I think I greeted or was greeted by everyone I saw on one particular street. That includes people inside their homes I peered into through their open doors and windows. I felt quite safe walking in these areas on my own.

I didn’t buy any food from any of these stores (sometimes they were just holes in the wall) but I did buy freshly squeezed juices from similar stores. Mango was my favourite.

As an aside note, lobster is not considered a specialty in Trinidad. The common dinner choices in Trinidad were usually beef, pork, chicken, fish and lobster. I chose lobster each time, without hesitation.

This man was walking along with his walking stick. It was clear to me that he was down on his luck and probably not quite with it but he was very jovial and had an interesting face and there did happen to be a blue wall right there. I asked him directly if I could take his photo and he just reacted spontaneously.

I gave him CUC$5 for being so happy and making me smile. 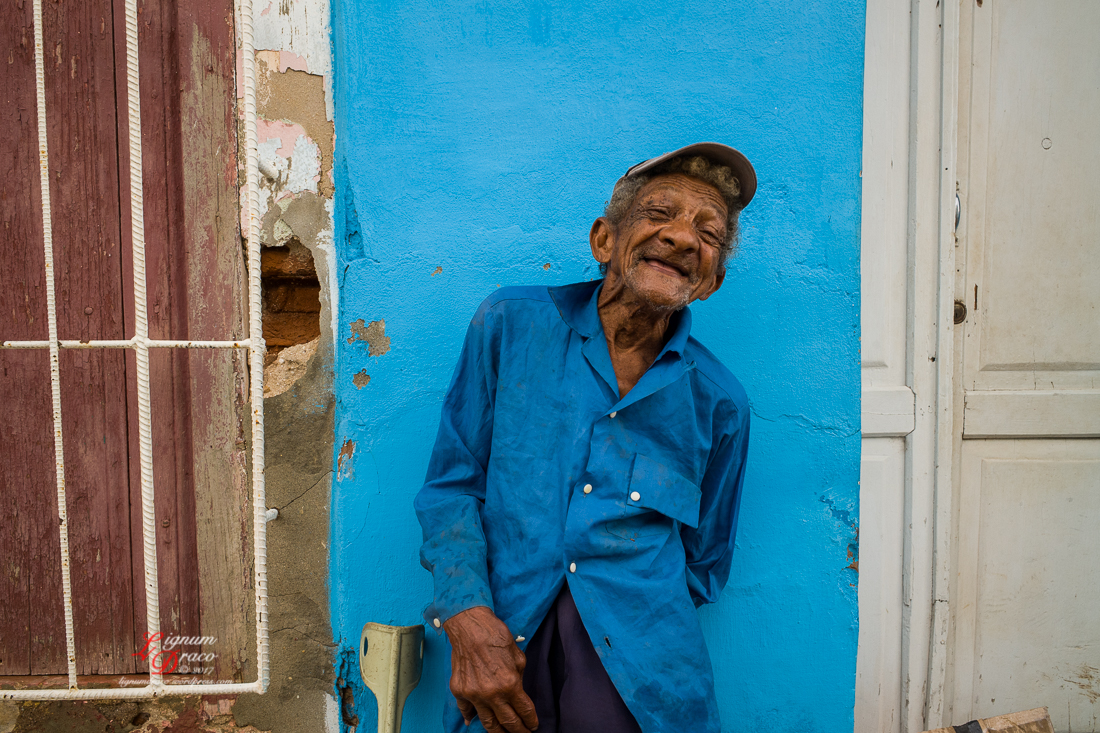 I hope I helped to make his day a little bit brighter as well.