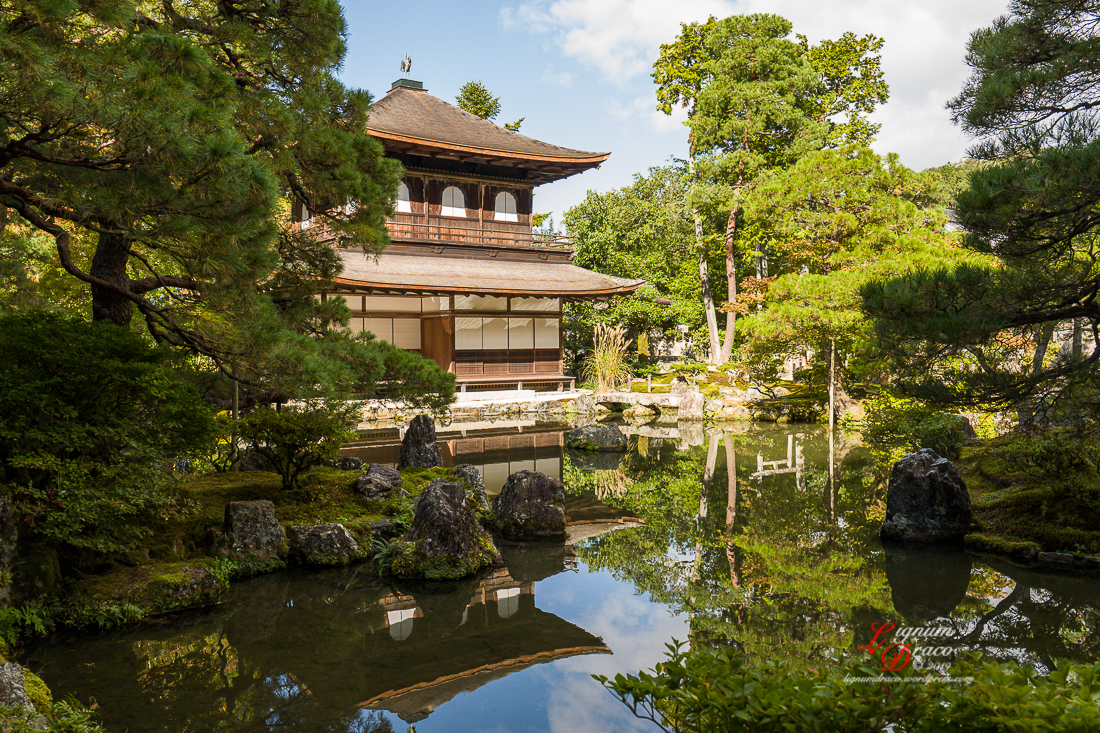 Above is the Zen temple Ginkaku-ji (銀閣寺, the “Temple of the Silver Pavilion”), officially named Jishō-ji (Temple of Shining Mercy). The two-storied Kannon-den is the main temple structure, the design of which sought to emulate the golden Kinkaku-ji. It is popularly known as the “Silver Pavilion” because of the initial plans to cover its exterior in silver foil. During the Ōnin War, construction was halted and the intent to coat the temple in silver foil was never realised. 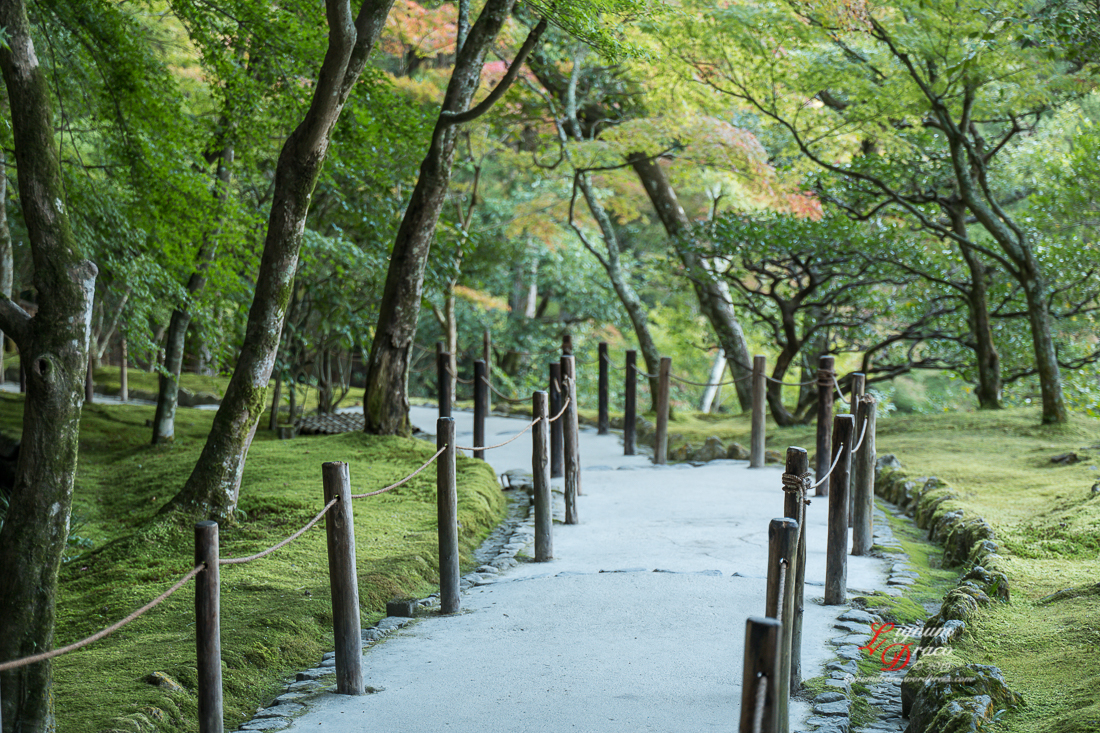 “The grounds at Ginkaku-ji”

It’s worth the time strolling the beautiful grounds of Ginkaku-ji. 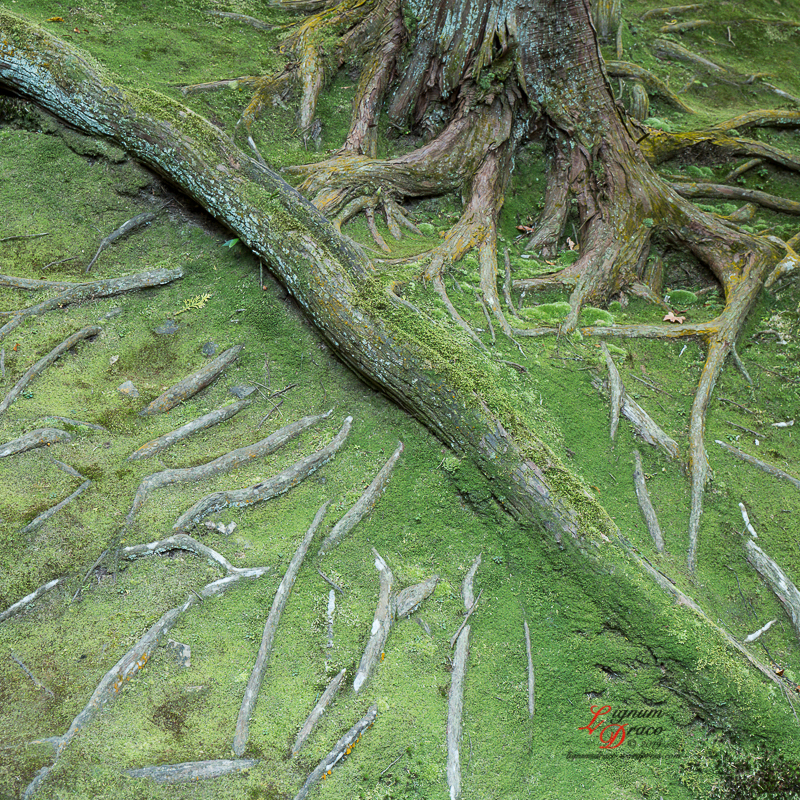 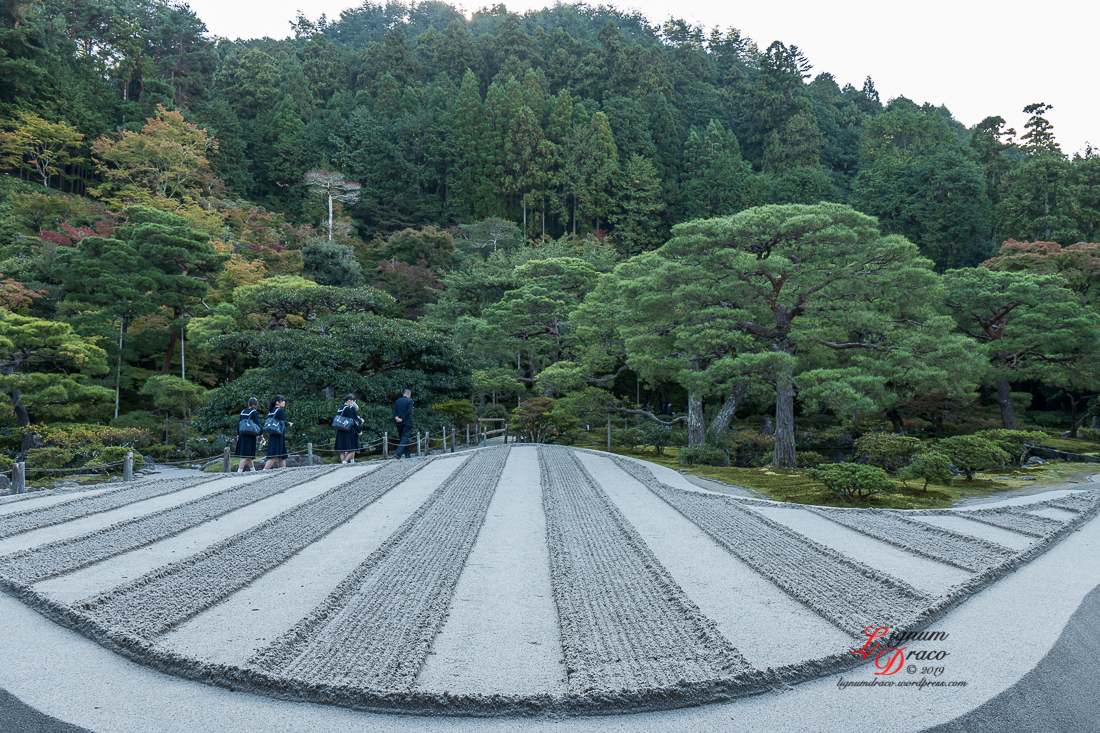 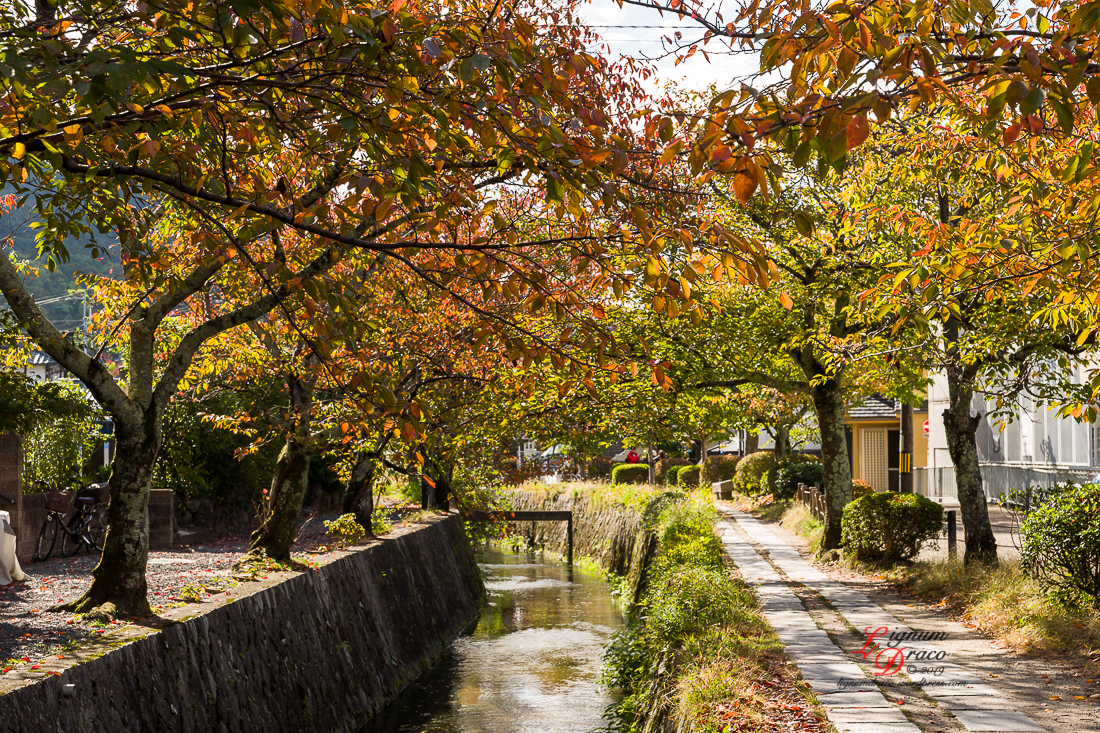 Ginkaku-ji is at the northern end of Tetsugaku-no-michi, the Philosopher’s Path, a lovely walking path alongside a canal in northern Higashiyama. It is named after a philosophy professor at Kyoto University, Nishida Kitaro (1870 – 1945), who would regularly walk along this canal among Kyoto’s most scenic spots. The path is famous for its cherry blossoms in the spring, and its colorful foliage in the autumn.

The actual path takes about 30 minutes to walk. But if you take the time to explore the various distractions along the way, well… it took me almost 5 hours. 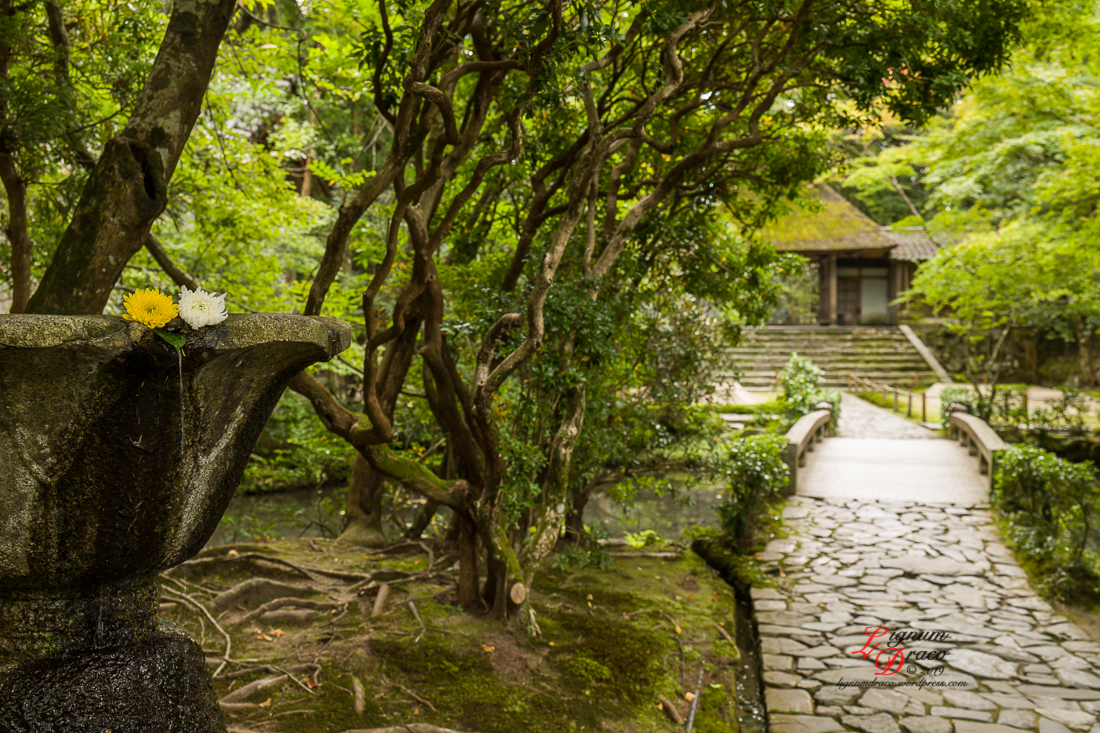 This was taken at Honen-in Temple, just off the Philosopher’s Path. Entering the main gate, one passes between two large mounds of sand, each raked with a design that changes regularly. Both had maple leaf designs when I was there. But it was the water bath/fountain that caught my attention. Two flowers and a leaf were at its spout. I’d like to think that was a random occurrence, however unlikely that may be, but it was quite beautiful to watch the water pouring over the leaf into the bowl below. 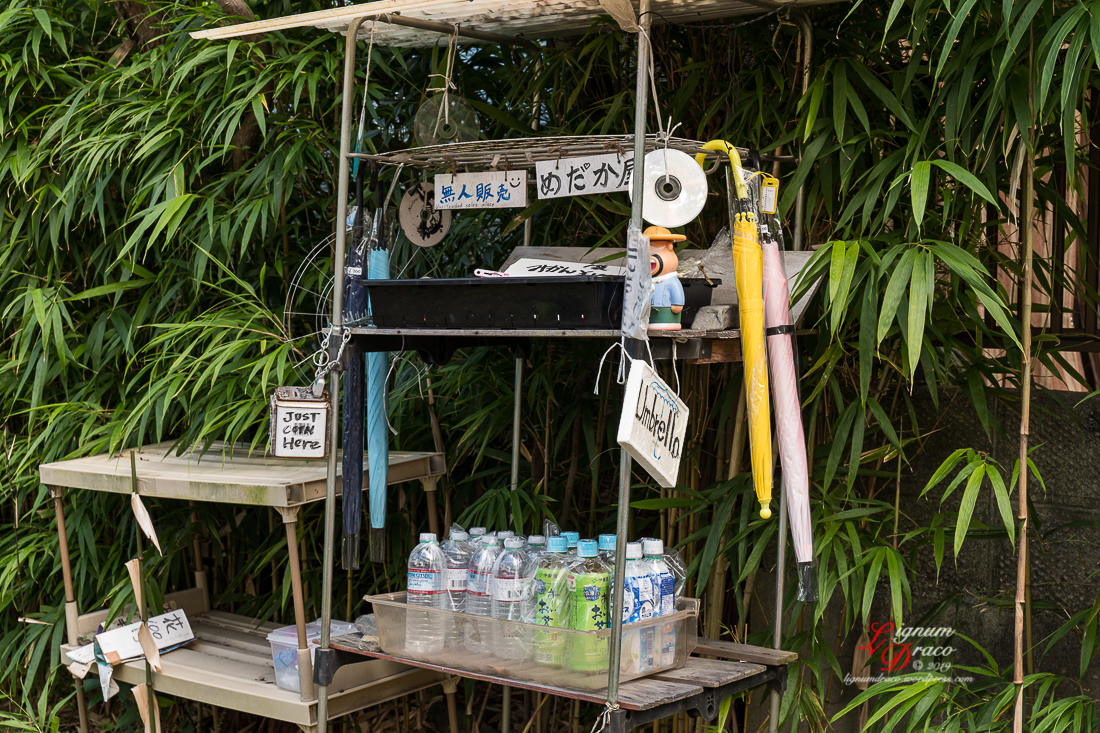 “A matter of trust”

One of a few unmanned stalls I saw in Kyoto. Take what you need and leave your money in the tin. Another such unmanned stall I came across along the Philosopher’s Path was selling bonsai seeds planted in moss bowls. 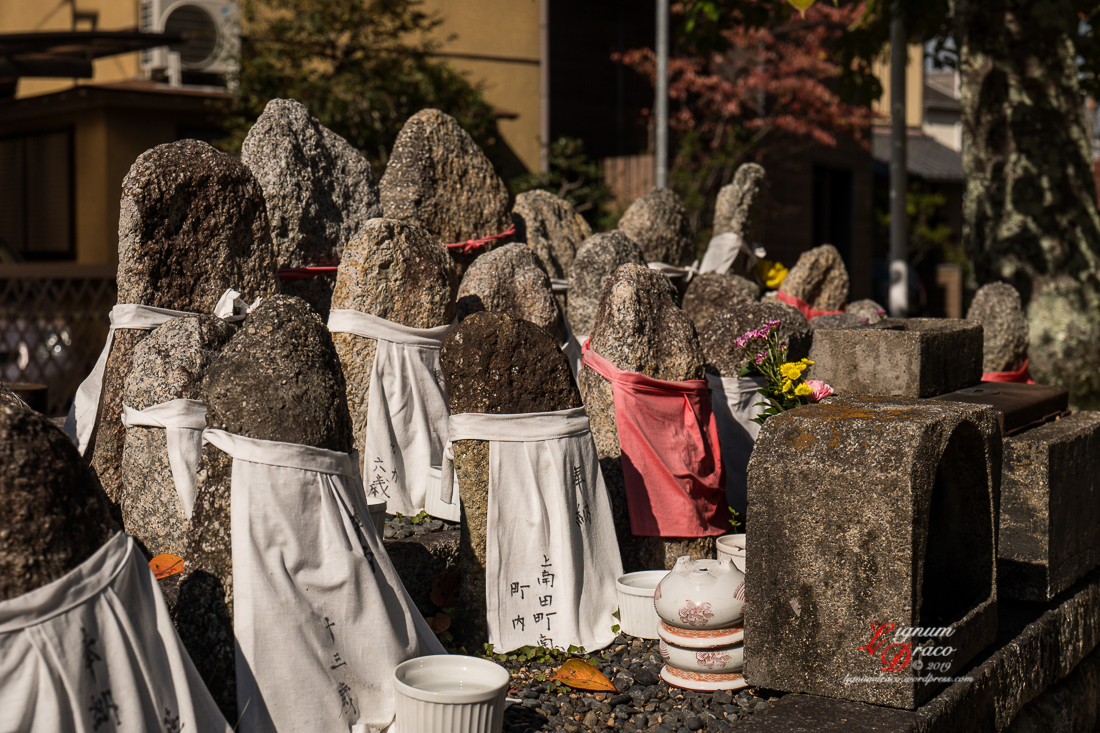 A small shrine with multiple stone Jizo, something that is quite common to find throughout Kyoto. Jizo is the Buddhist patron deity of children (and travellers), and I was told the practice of placing baby bibs on the statues began when grieving parents did so in hopes it would protect their deceased child in the other world. Today, the practice is probably more commonly for aesthetic reasons. 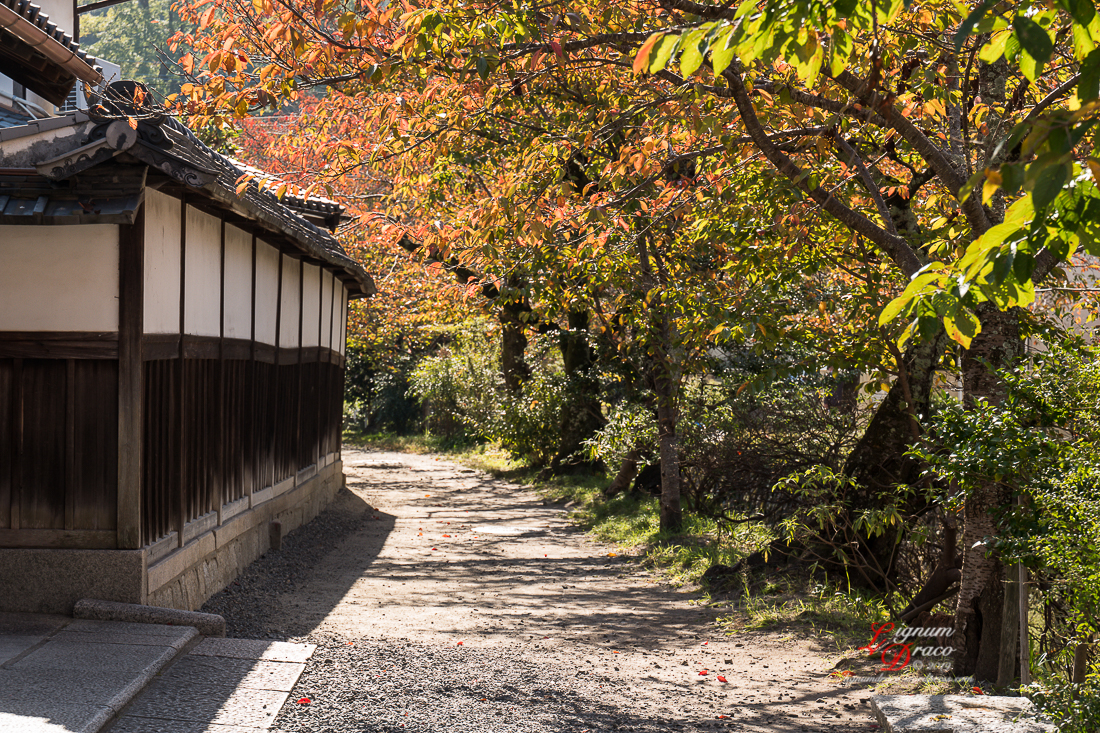 “The Path of Philosophy” 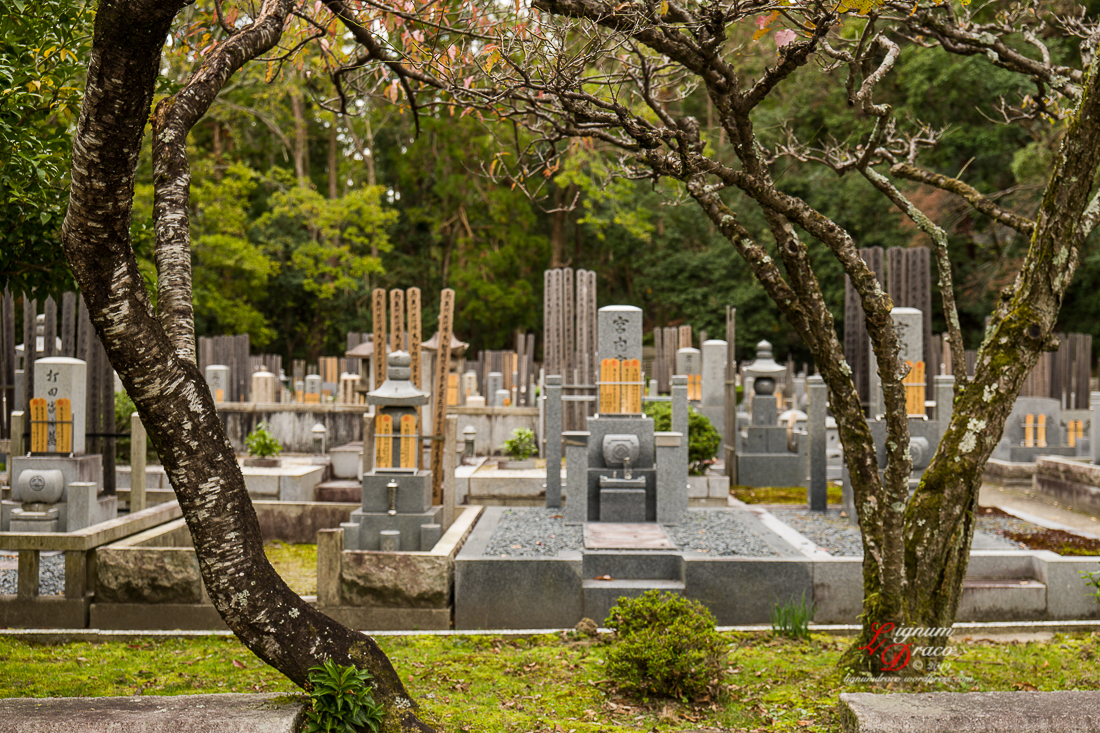 A small cemetery just off the Philosopher’s Path. 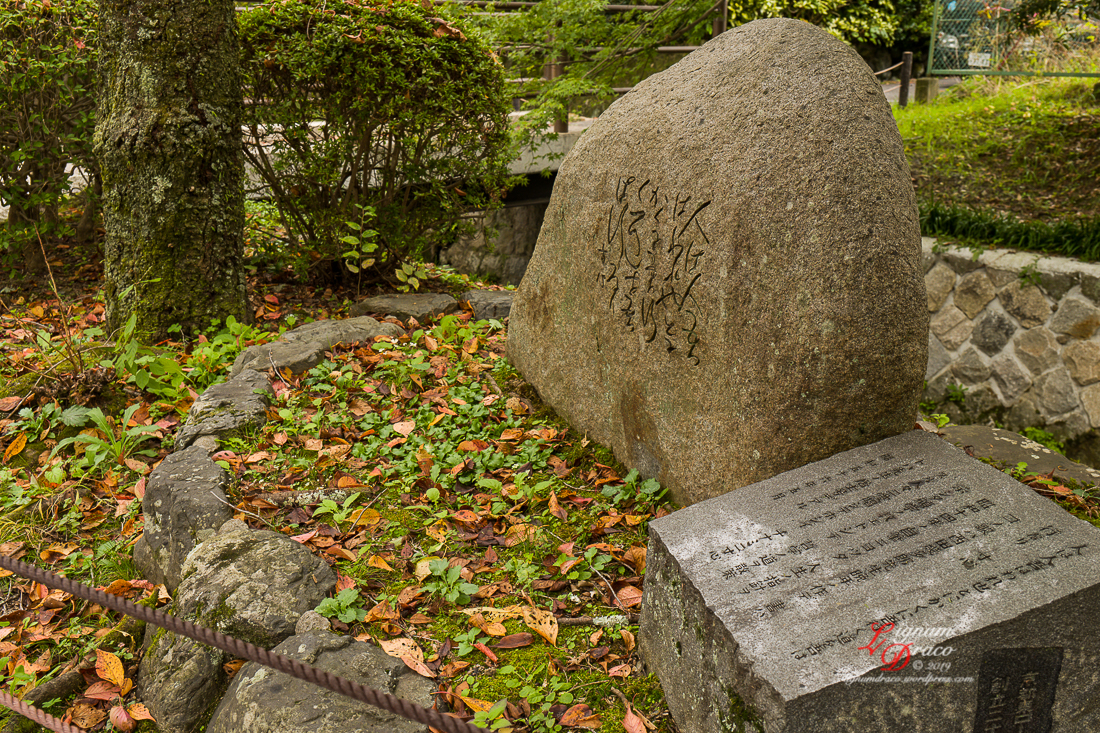 “Lignum Draco and the Philosopher’s Stone”

Along the path is this large stone. Carved into it is a poem by Nishida Kitaro, for whom the path is named. The English translation reads:

People are people,
and I will be myself.
Regardless,
the path I follow
I will follow on… 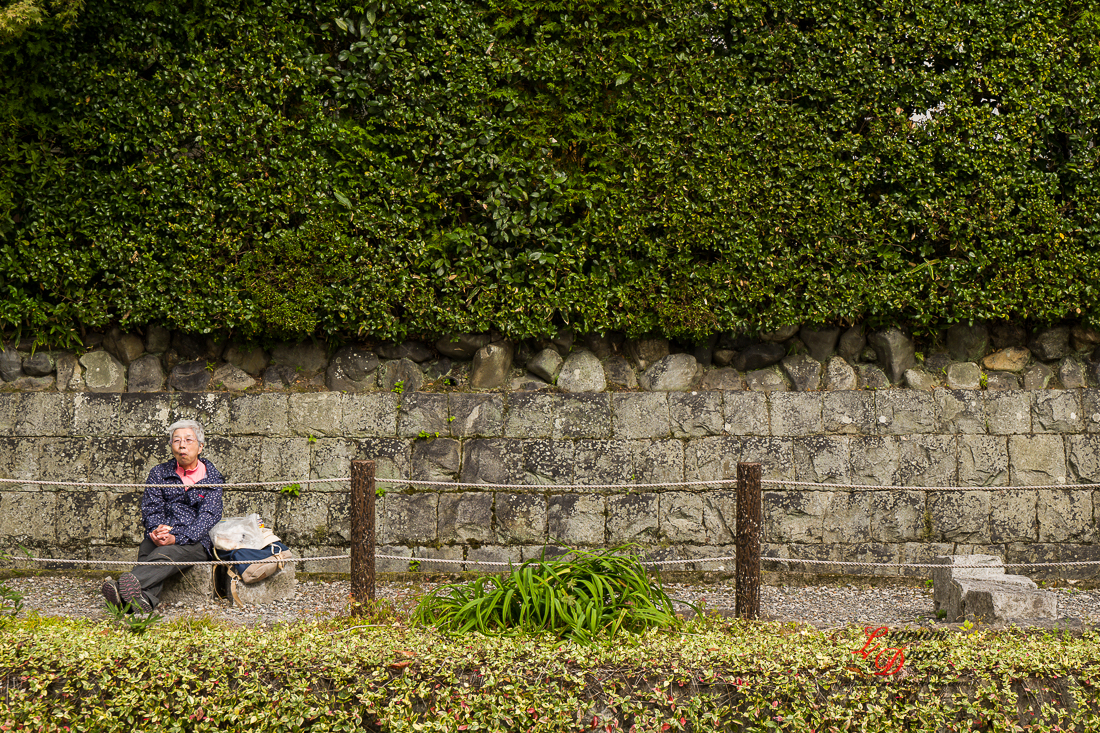 “Life in the slow lane” 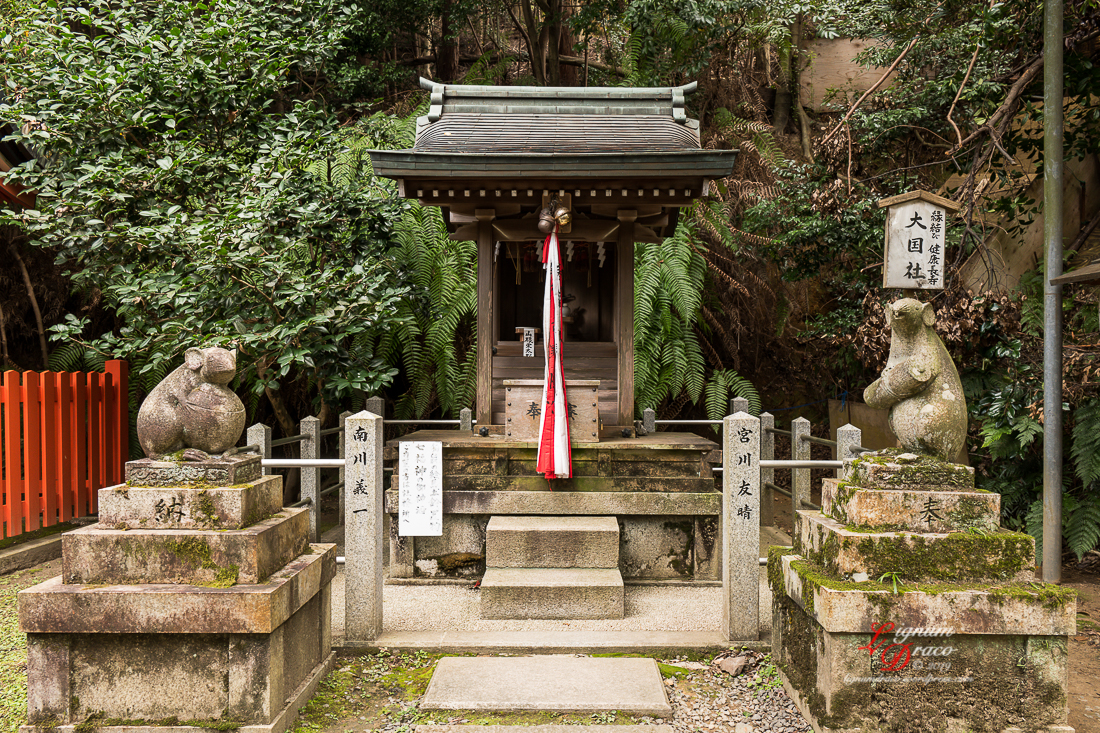 “I love meeces to pieces”

This is the Otoyo-jinja Shrine, a shrine dedicated to the hero-god, Okuninushi, whose life was saved by a mouse, hence the guardian mice at his shrine. The mouse on the left is said to be holding sacred sake, a symbolic celebration of good harvests and happy childbirth. The mouse on the right carries a scroll, symbolic of learning.

“The pond at Eikando”

Marking the southern end of Tetsugaku-no-michi is the Eikando Temple, a place famous for its autumn colours. 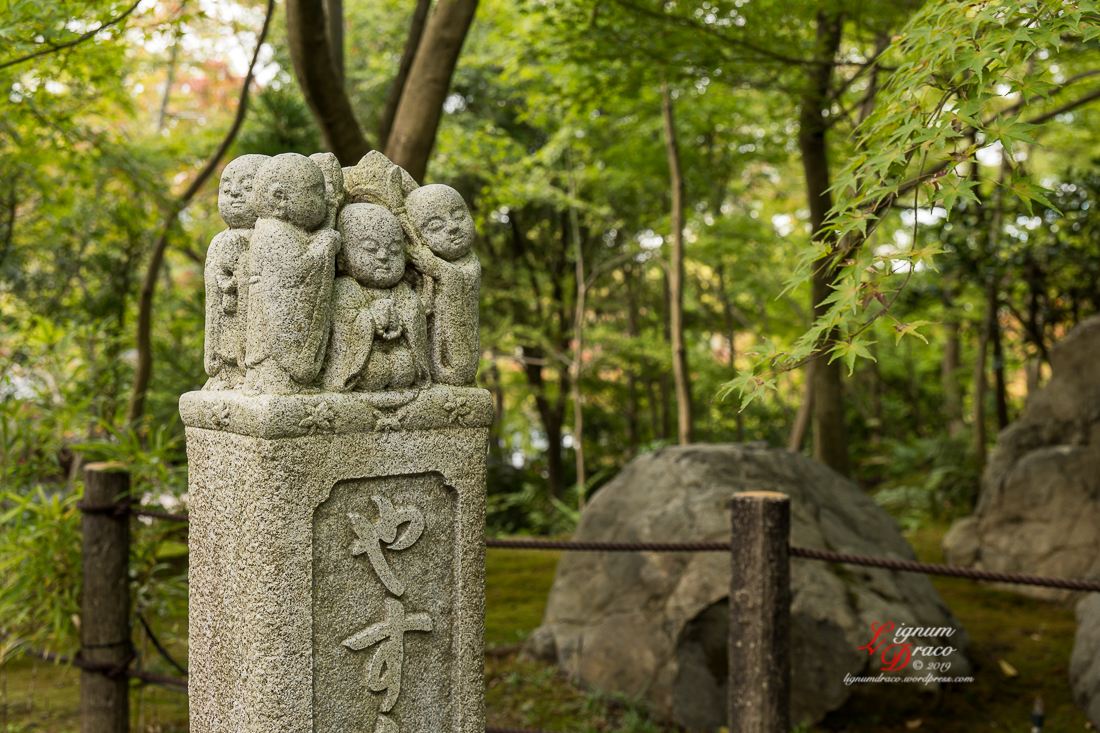 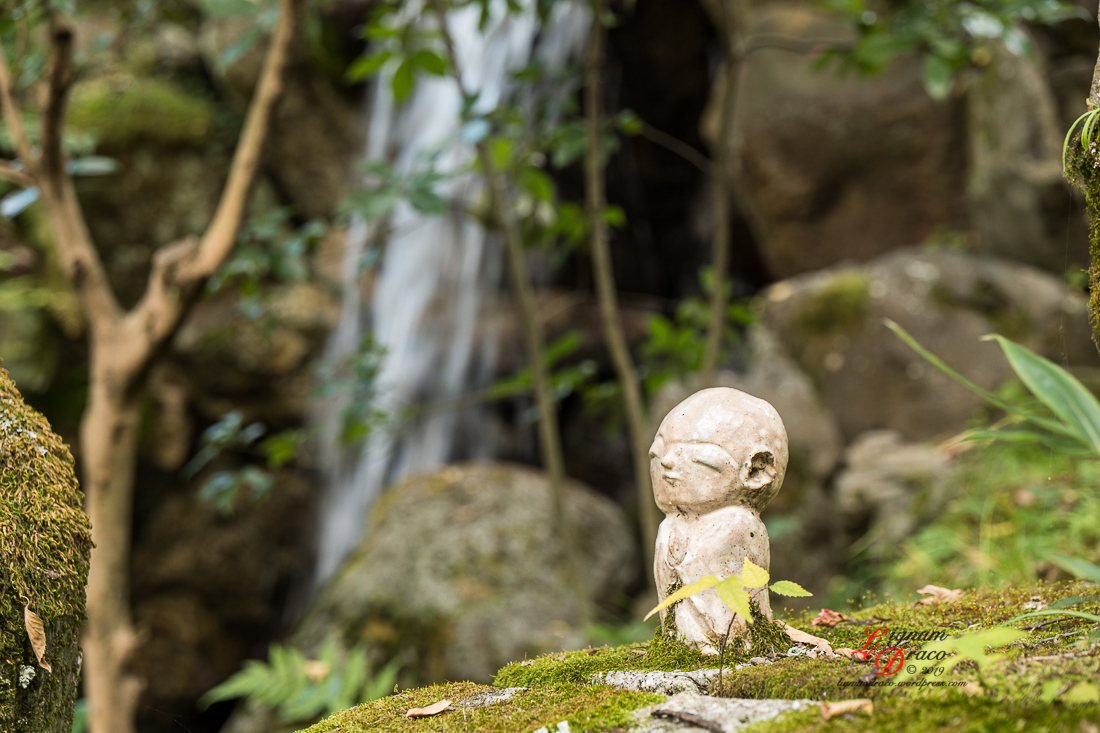 “May the falls be with you; always”

With that small waterfall in the background, I couldn’t help myself with that caption. 🙂