“At the Meiji Shrine”

In my previous post, Tokyo Life, we saw the eclectic side of life in Tokyo. Now let’s take a look into some of the temples and shrines I visited in Tokyo. There are many temples and shrines of differing size and significance scattered throughout the city. This is my glimpse into Tokyo zen…

One of Tokyo’s best known and popular shrines is Meiji Shrine, dedicated to the deified spirits of Emperor Meiji and his consort, Empress Shoken. I visited in winter, a day after it had been snowing and covered in snow (above) the buildings and grounds of the shrine had a more serene ambience than when I visited previously in autumn.

Walking towards the shrine I was struck by the simple beauty of the shadows of trees falling across this sign.

Meiji Shrine is located in an evergreen forest that covers an area of 70 hectares (170 acres) consisting of 120,000 trees of 365 different species, which were donated by people from all parts of Japan when the shrine was established. It is an oasis situated between the urban areas of Shibuya, Shinjuku and Harajuku.

At every temple and shrine in Japan you will find a Chozuya, or Temizuya which often looks like a small shrine but is a water feature where visitors purify themselves before worshipping. There is a specific ritual to follow, which is actually quite simple, even a child can do it.

“Young girl at the Meiji”

I went up to the girl’s mother and requested to take a photo of her daughter. She graciously called out to her daughter to come and pose for me.

On Sundays the Meiji shrine essentially becomes Wedding Central. During my time there on 2 separate Sundays, I saw 7 different but very traditional wedding processions.

“When the professional photographer isn’t looking…”

Of course, they all then have photos taken in the area. The candid moments are often the best.

“Butterflies are free and so is she”

The Hie Shrine is located in Akasaka near the centre of Tokyo, near the National Diet Building. This little girl was having some photos taken of her. I pity the professional photographer who had his hands full trying to keep her interest and stopping her from just running around and playing.

“The torii gates of Hie”

The Hie Shrine holds 14 important cultural assets, but photographically its main point of interest is the relatively lesser known rear entrance, a stairway of torii gates. Torii gates are a feature of Shinto shrines and act to divide our world and the spirit (kami) world. Torii gates mark the entrance to a place where the spirits hear your prayers.

Many shrines have an area for wooden plaques to display wishes and prayers. In the suburban area of Koenji the small Hikawa Shrine has plaques that look like Japanese sandals, not surprising given the type of shops they have nearby. 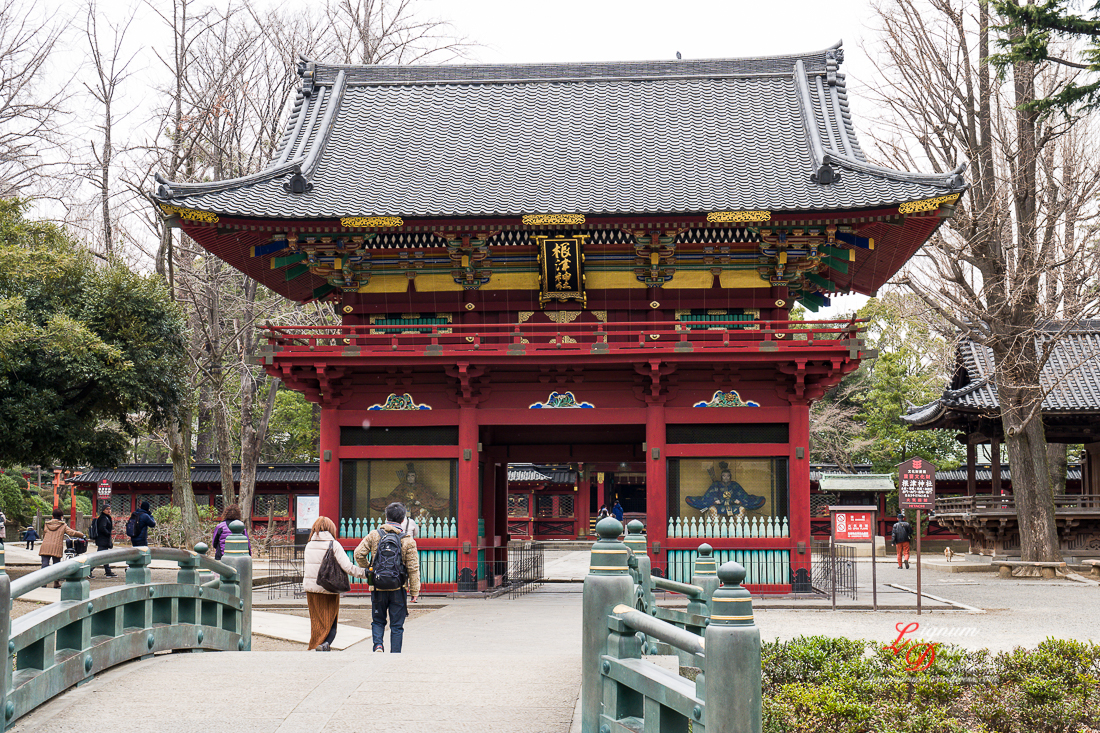 “The Tower Gate of Nezu”

The Nezu Shrine is a Shinto shrine located in the Bunkyo ward of Tokyo. Established in 1705, it is one of the oldest places of worship in the city, and several of the buildings on the shrine grounds have been designated as Important Cultural Property. 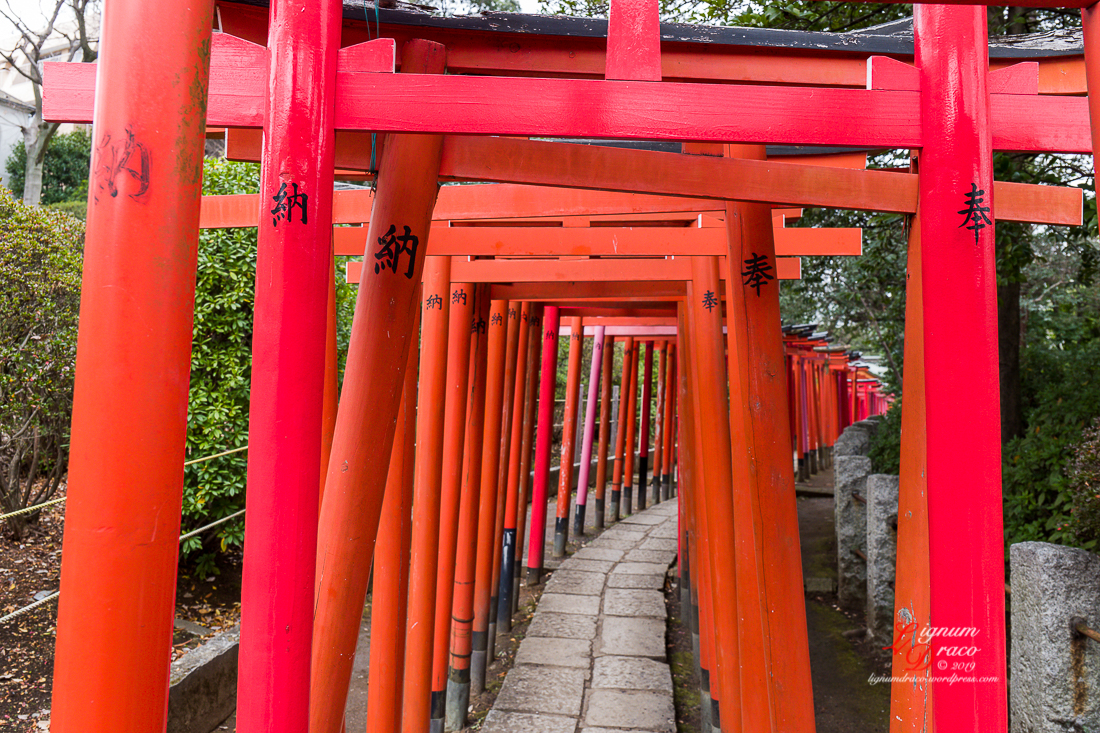 “The torii gates of Nezu”

One of the most famous features of the Nezu shrine is the path of vermilion torii gates through the hillside left of the main hall.

In the middle of the path there is a viewing platform over a pond of koi, overlooking the main shrine precincts.

“The winter gardens of Nezu”

Nezu Shrine is also famous for its Azalea Festival (Tsutsuji Matsuri) which is held on its grounds from early April until early May. It has been described as “Tokyo’s most beautiful shrine” and as one the city’s “most spectacular spring scenes”.

At many temples, such as Shinobazunoike Bentendo Temple, the so called floating temple of Ueno, there are large incense burners. Worshippers fan the smoke of the incense over themselves as a purification and healing gesture.

Sensō-ji is an ancient Buddhist temple located in Asakusa. It is Tokyo’s oldest temple, and one of its most significant. From above you can identify the Kaminarimon or “Thunder Gate” at the front, then the Nakamise-dori with its shops, followed by the Hozomon or “Treasure House Gate” which provides the entrance to the inner complex. Within the precincts stand a five-story pagoda and the main hall.

“The Main Hall of Senso-ji” 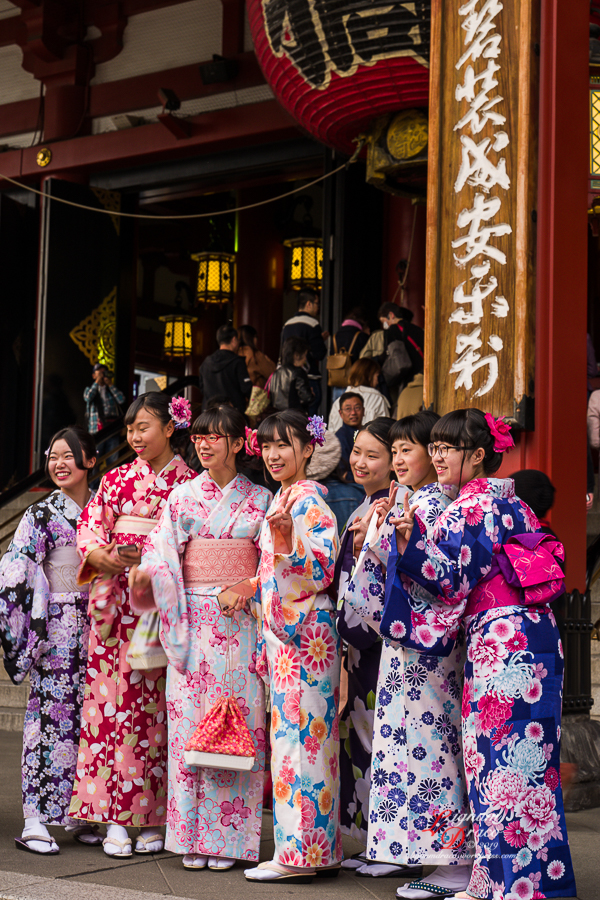 Because of its historic significance the Senso-ji tends to be one of the more popular temples in Japan and the human crush of visitors is quite evident, many of whom are dressed up in kimonos.