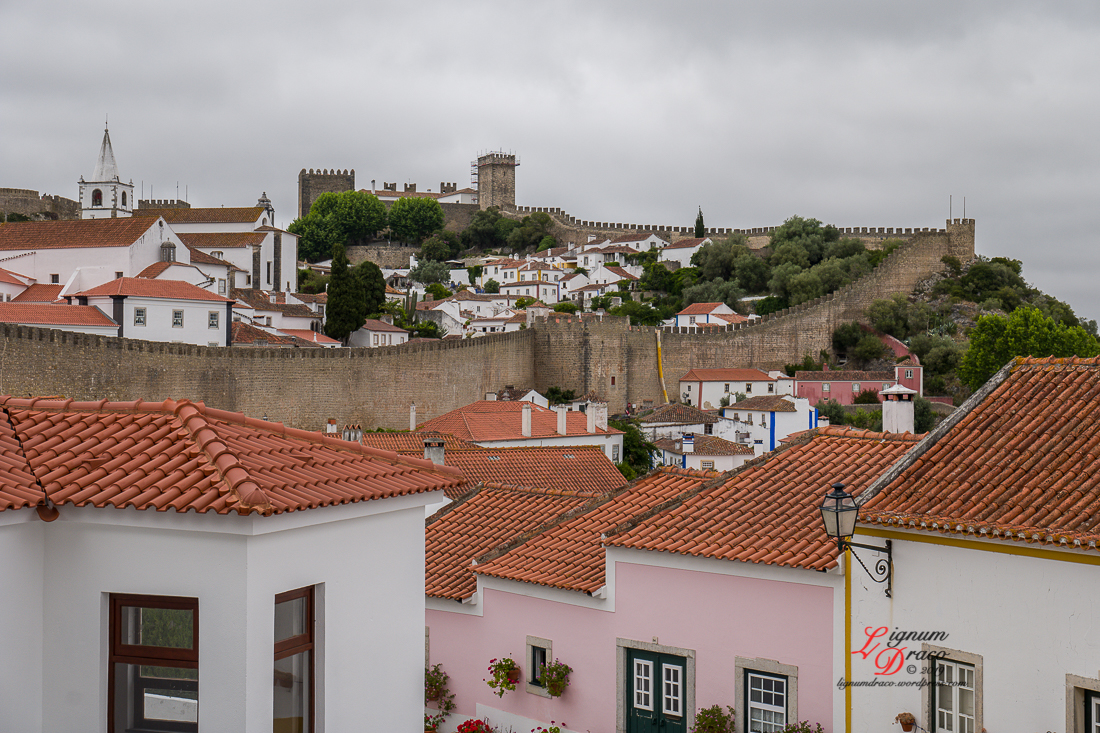 “On the outside looking in”

To the north of Lisbon, about an hour’s drive by express bus, lies the medieval walled town of Obidos, which was voted as one of the seven wonders of Portugal (7 Maravilhas de Portugal) in 2007. On the day I visited there was dense cloud cover the entire day in Obidos, despite it being hot and cloudless in nearby Lisbon. Must be one of those “microclimate” things. Such is life. 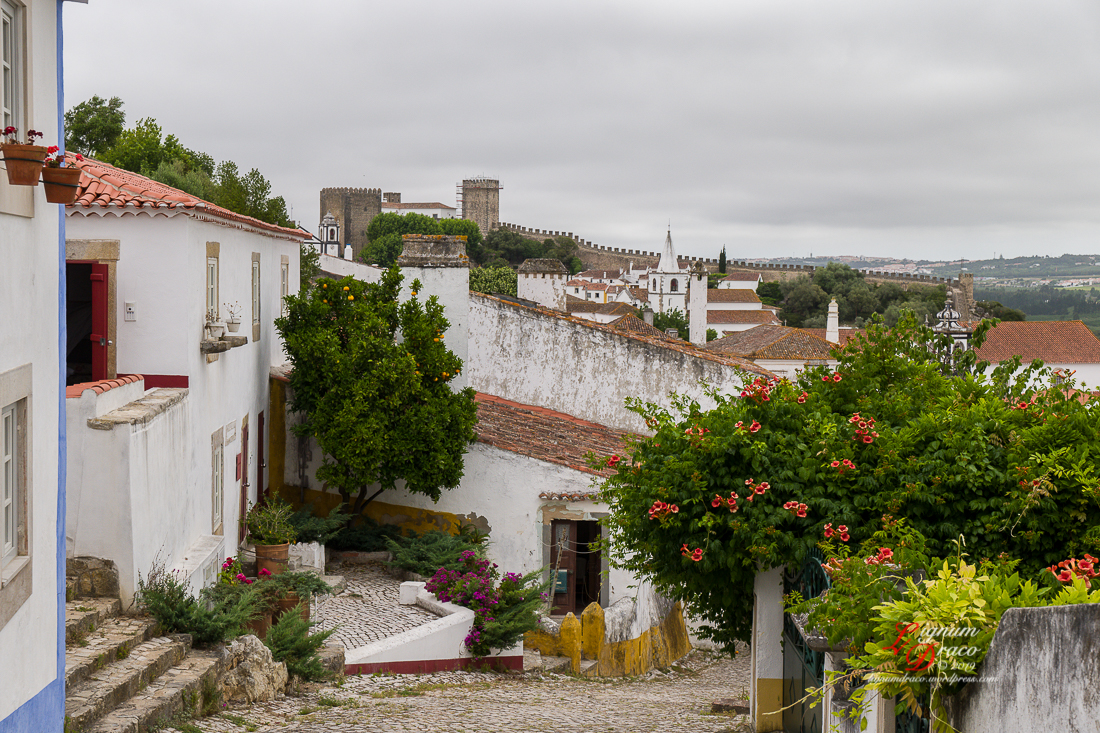 Obidos is commonly considered as one of the most charming and picturesque towns of central Portugal. Within the town are traditionally whitewashed cottages trimmed with blue and yellow paint, narrow cobblestoned streets, and an old Moorish castle. 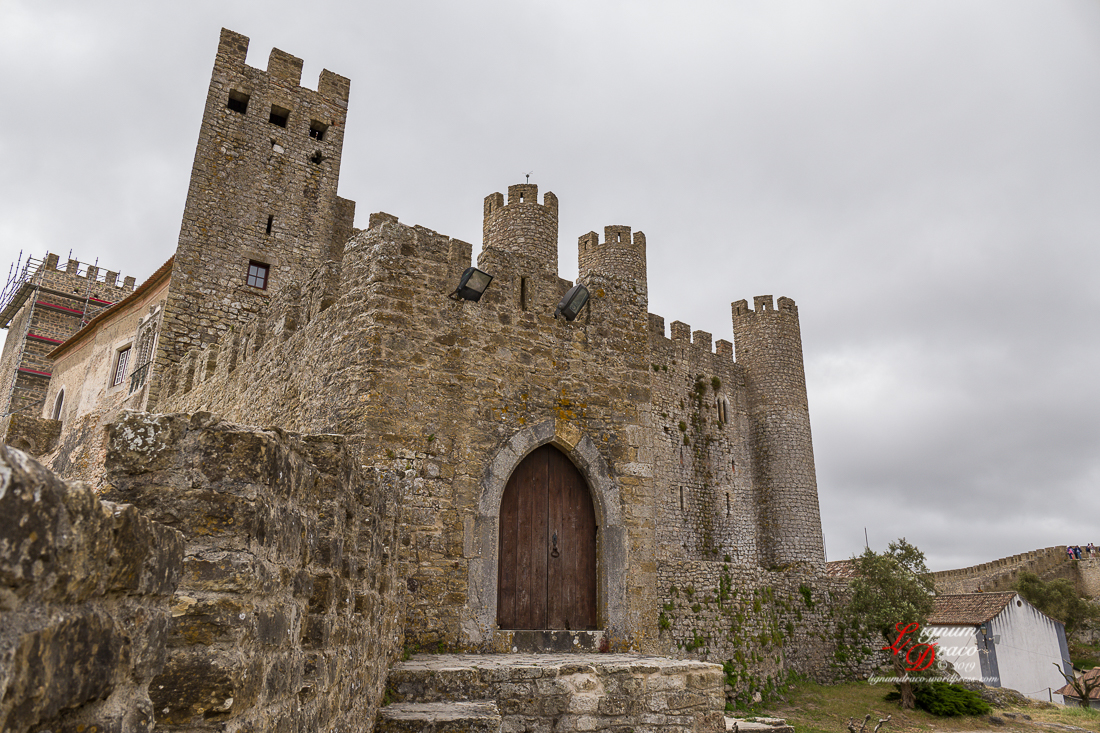 Construction of Obidos castle began in Roman times in the mid 1st century, but it wasn’t until the occupation by the Moors that the fortress was completed. In 1148 the first king of Portugal, Dom Afonso Henriques, defeated the Moors and conquered the village and its castle. In 1210, King Afonso II gifted the town of Obidos to his wife, Queen Urraca. Since then, Obidos was often patronized by the Queens of Portugal, giving rise to its informal title as Vila das Rainhas (town of the Queens). 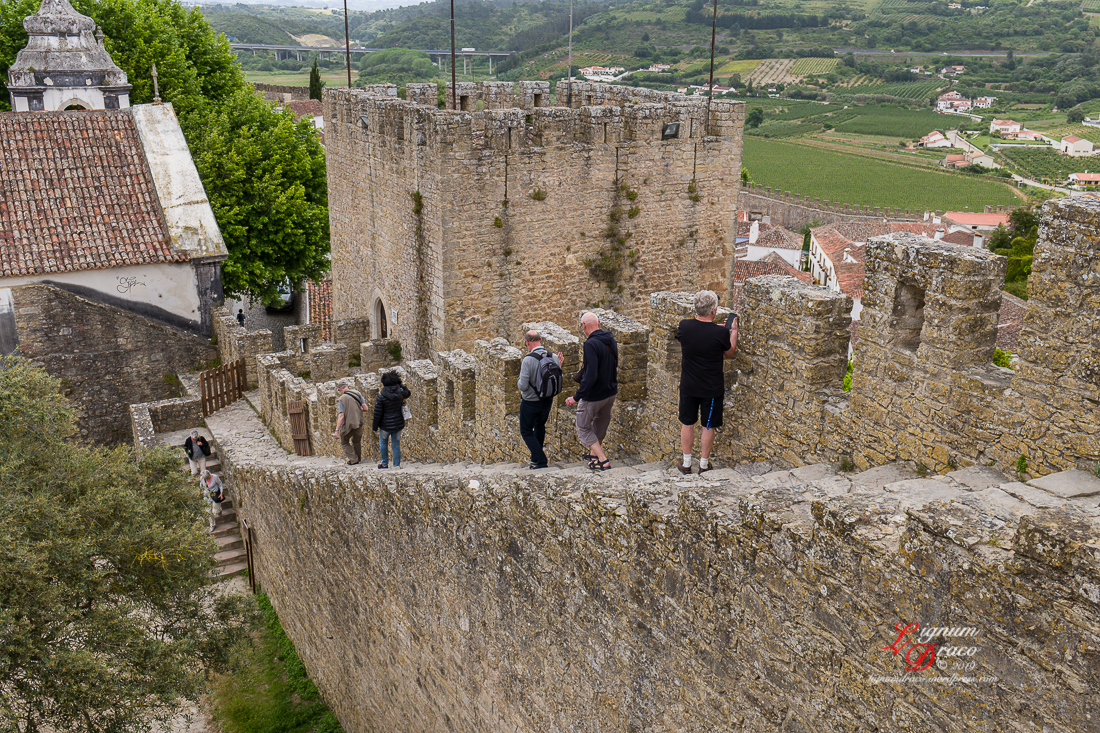 The wall of this medieval town is about 1.5 km in length and some of it is open to be walked. 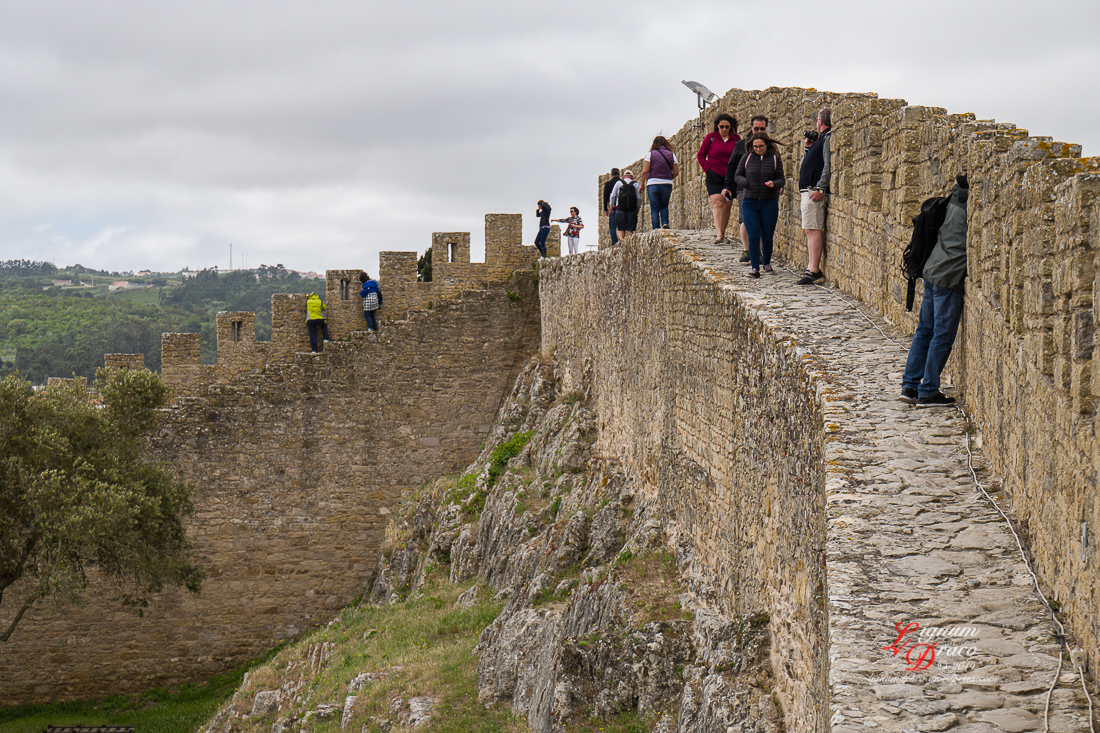 “On the Walls of Obidos”

I tried to time my multiple walks across the wall to when no-one else was coming from the other direction. But when there was, I always made sure I was the one who stopped first to let them pass, so I could grab the wall for safety. I couldn’t imagine walking the walls in full battle armour. 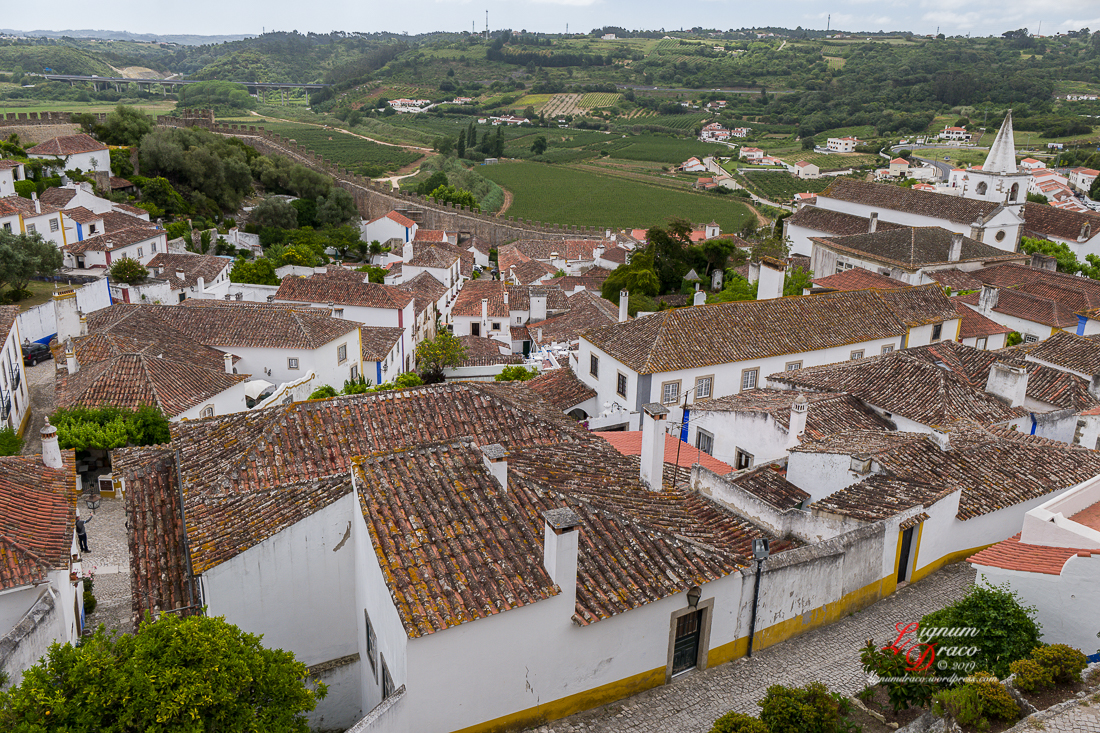 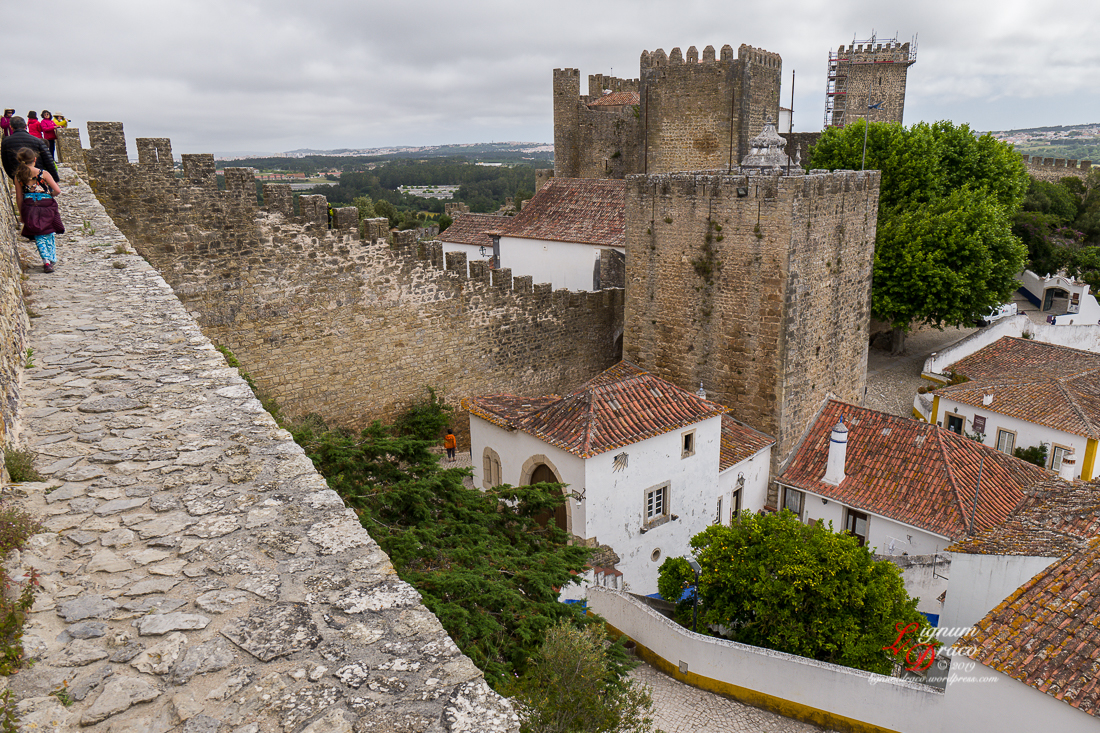 I came across one guy who had just walked up a set of stairs with his children to the top of the wall. As soon as he saw how narrow the path on the wall was, he hesitated and walked straight back down. 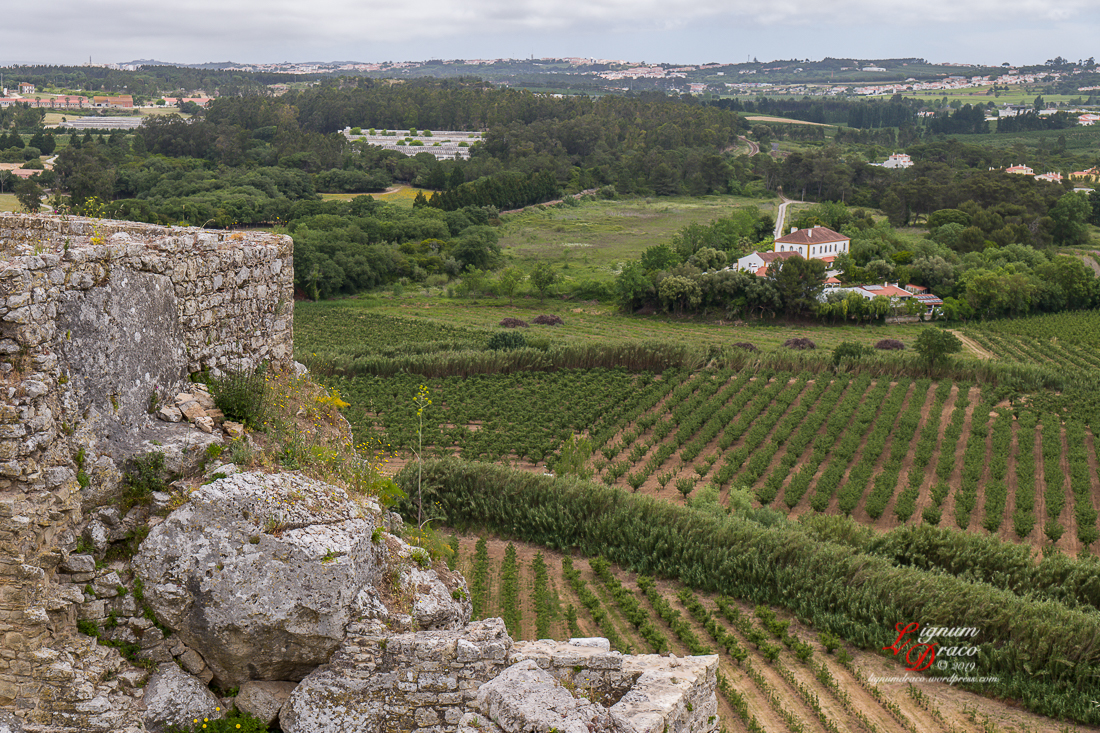 There were some lovely views over the town and also across the surrounding countryside with numerous orchards and vineyards. 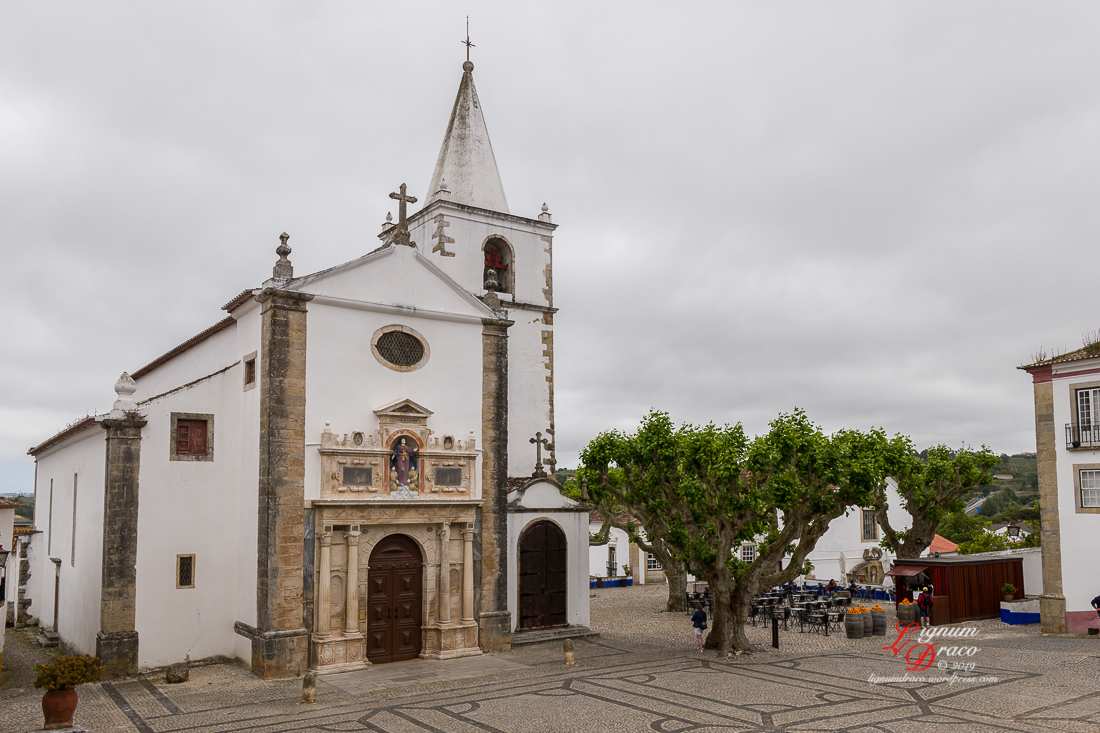 Back on the ground, the town has many points of interest. 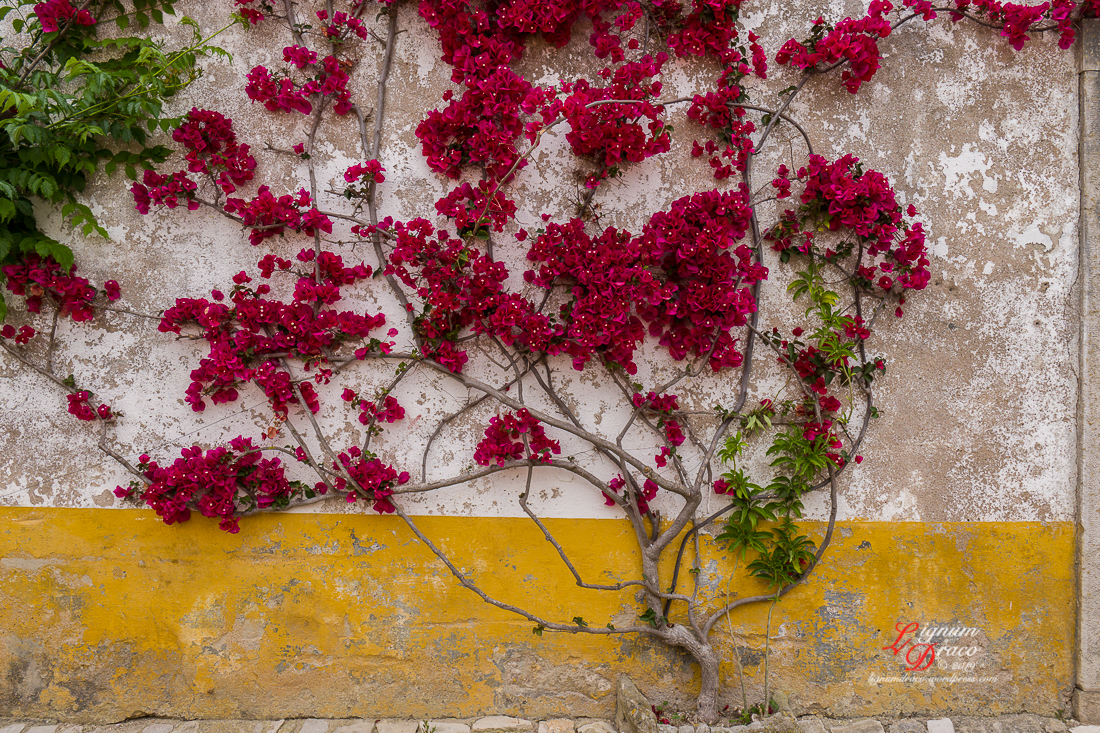 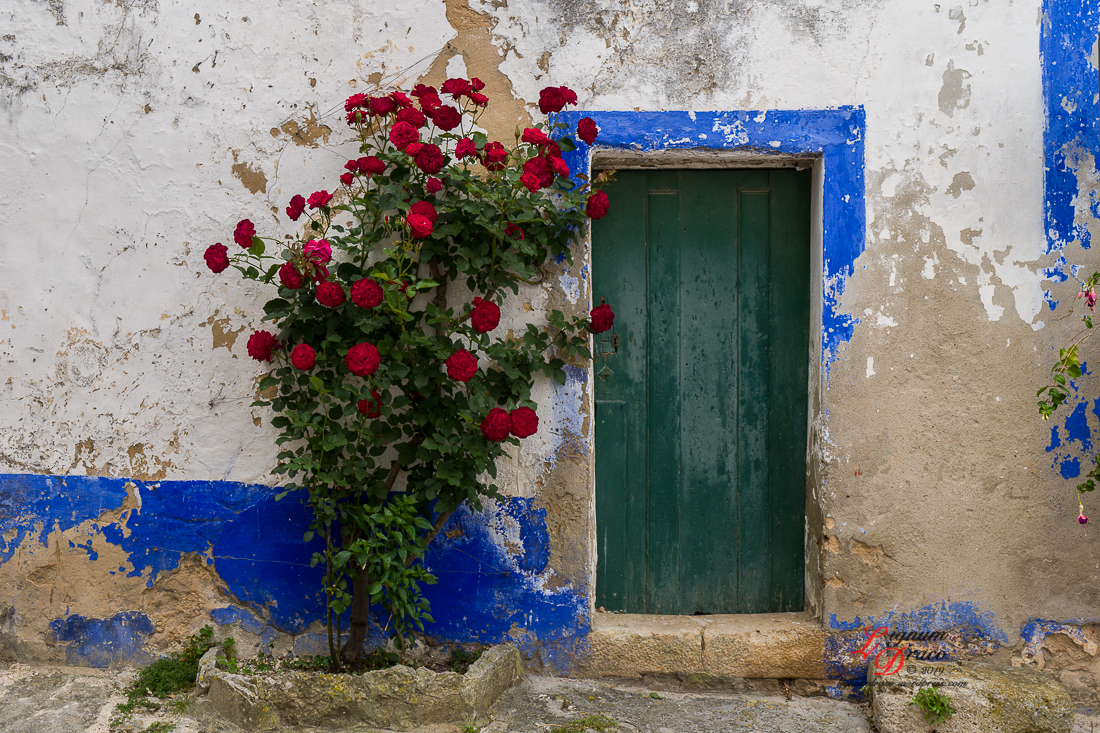 “A wall with door in Obidos” 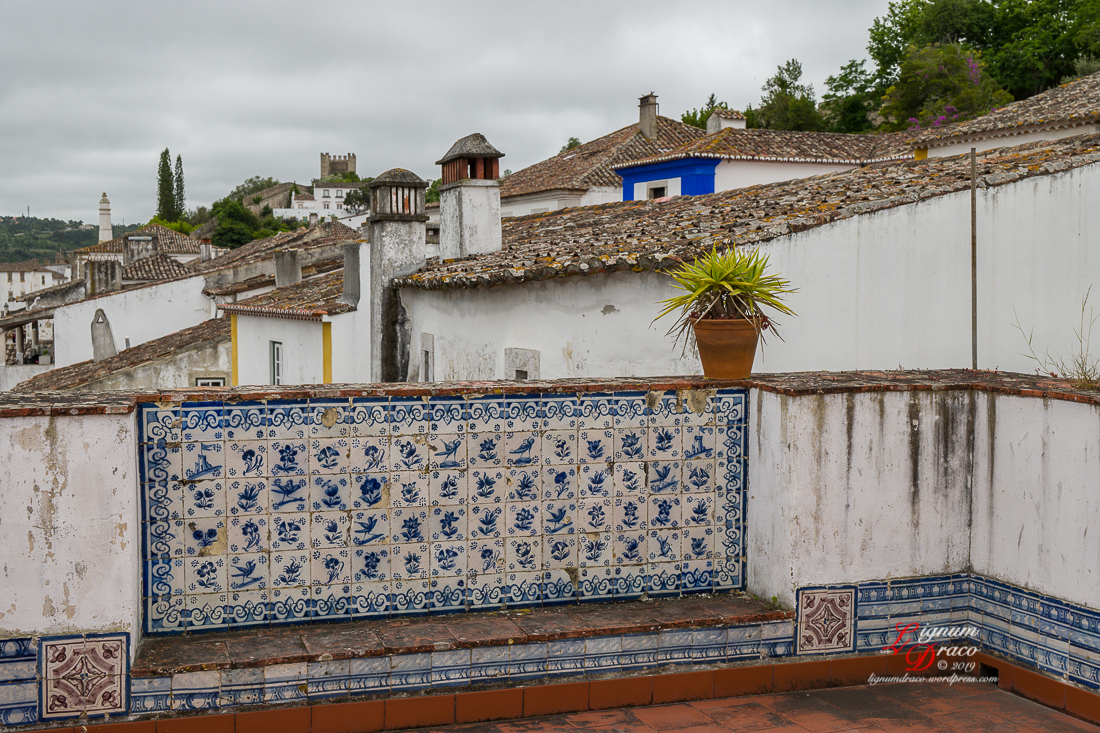 Of course there would be painted blue tiles on the walls of Obidos. 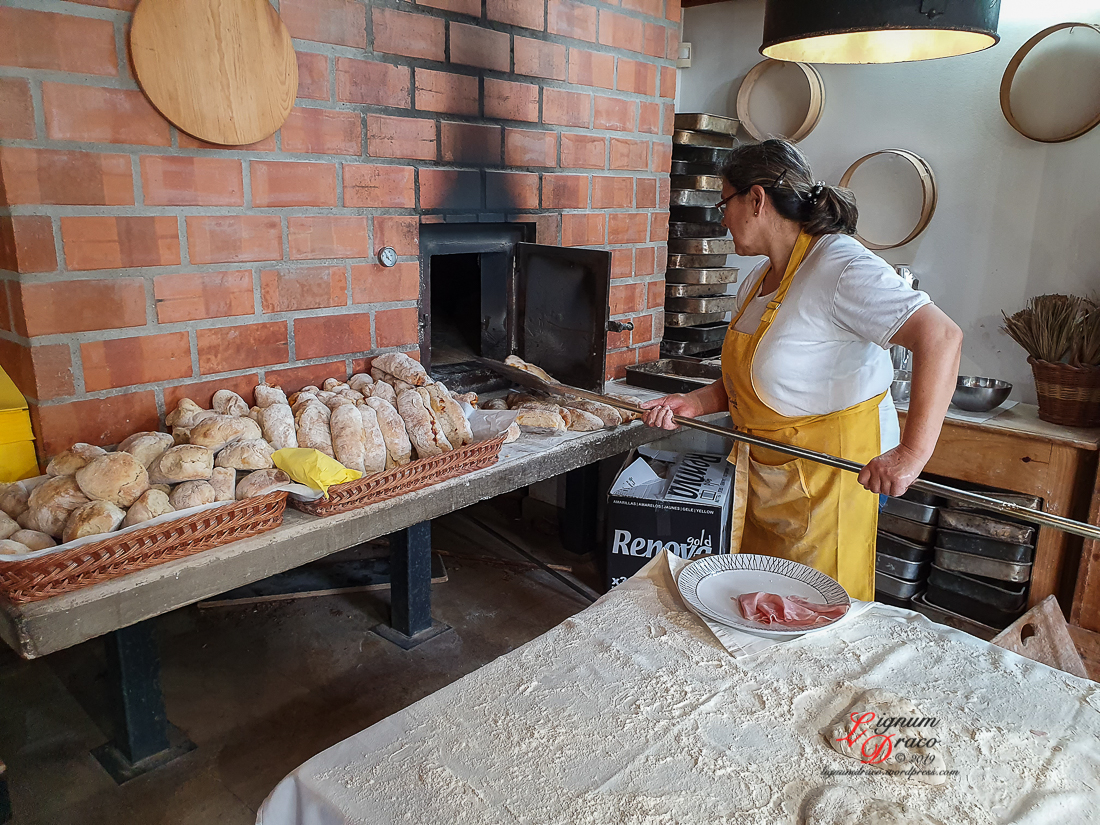 On my first full day in Lisbon I did a food tour and the guide told me they made the best chorizo bread in Obidos. It didn’t take long for me to find this bakery and coming straight out of the oven as I walked in were loaves of bread with large slices of chorizo in their centre. I immediately bought a loaf and ate it. I didn’t need lunch after that.

Another of the specialties of Obidos I indulged in was ginjinha (cherry liqueur) which I had served in a chocolate cup. 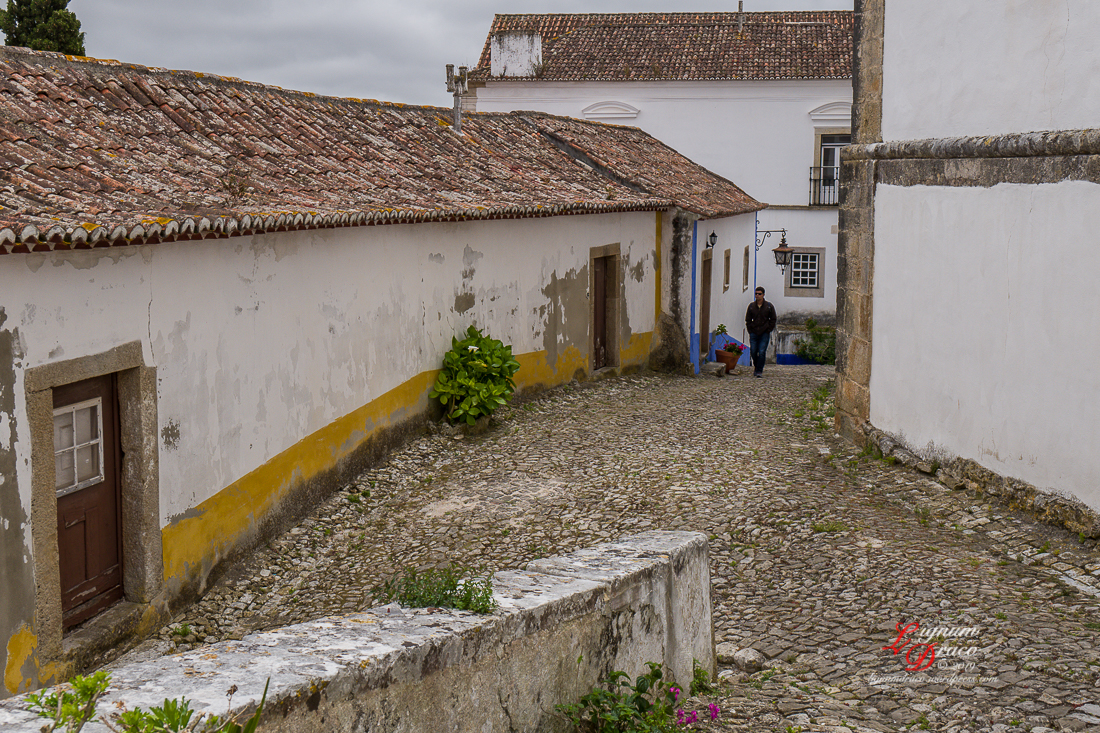 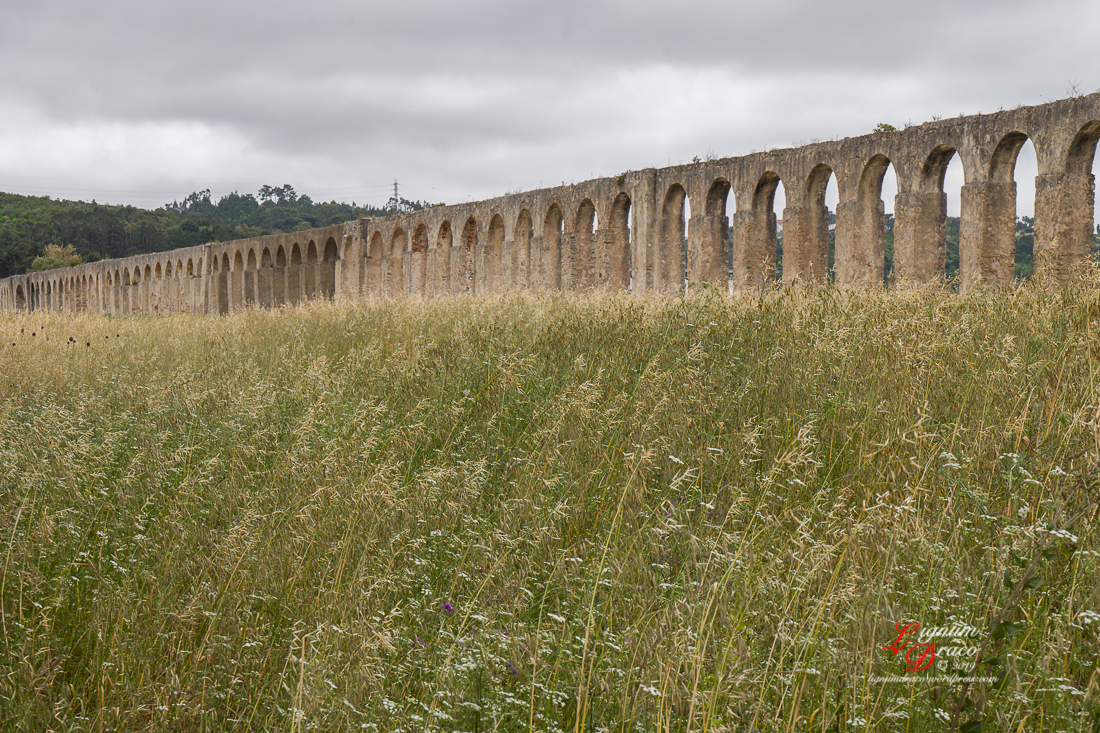 Of course there are other interesting features outside the walled town, including this 16th century aqueduct. But I didn’t venture much outside of the wall of Obidos as I had to catch the bus back to Lisbon, a 1 hour trip that took almost 2 hours because the bus broke down on the highway.

This is Part 7 of this photographic series and Part 4 of the posts about Portugal.

48 thoughts on “Walls of Obidos”