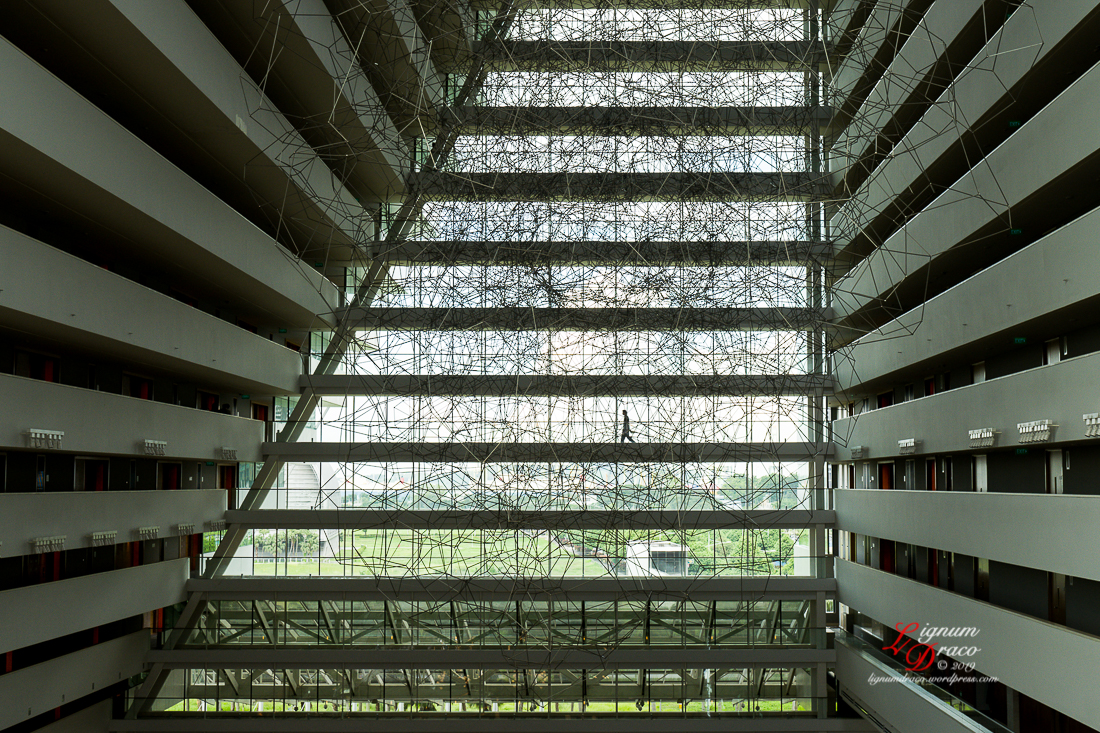 “A Passage through Singapore”

This is the conclusion to my Europe 2019 photo series.

Recently I spent a month visiting France and Portugal, with a short visit to Singapore for good measure. So, after 12 posts about Portugal and 7 posts about France, let’s visit Singapore. I’ve posted about Singapore in previous years so I’ll limit this post to a few new photos from my most recent visit there.

The tyranny of distance means that travel from Sydney to anywhere in Europe is not easy, and requires at least one stopover. Fortunately my preferred stopover is the garden city/state of Singapore which has one of the most efficient and highly regarded airports in the world, which makes stopping over less of a burden than it is at other stopover locations. Plus, there are great food options there.

On this trip I had a 6 hour stopover at Singapore on the way to Paris. This was plenty of time to allow me to visit the new Jewel of Changi Airport. Jewel is a large brand new shopping complex on the site of an old carpark at Changi Airport. You have to exit Customs to visit it, a process that took less than 2 minutes, compared with getting through Customs at San Francisco Airport which took about 20 minutes last time I was there. It’s then a 10 minute walk direct to Jewel.

The centrepiece of Jewel is the central Rain Vortex. There is an extensive internal multilevel garden with numerous paths and water features and an upper floor rainforest with restaurants. On the other side of the circular complex is a large multilevel shopping centre, with restaurants galore and a hotel. You can even check into your flight in Jewel rather than at the airport itself. The complex also includes Singapore’s first Shake Shack and I’d estimate the queue was about 200 deep when I walked by.

Water pours in over the roof to form a powerful central waterfall. The water is then recirculated to the roof. 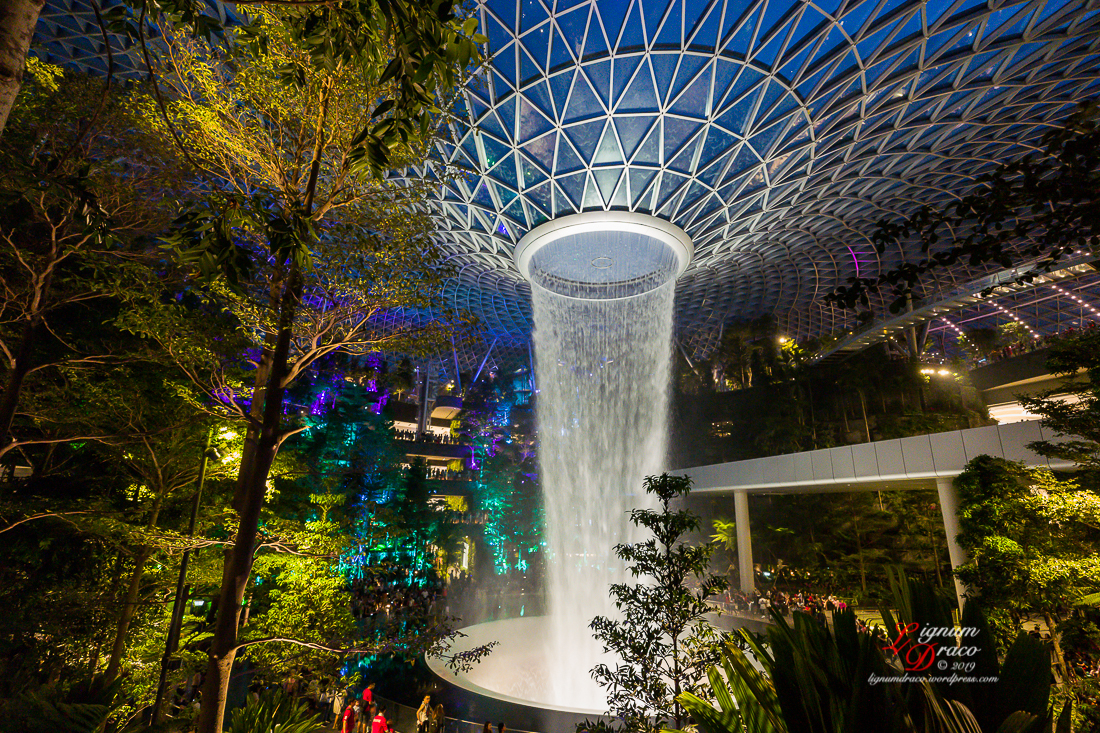 The lights projected on the waterfall slowly change colour. Every hour (on the half hour) there is a 5 minute light and sound show centred on the waterfall. It’s quite a spectacular sight, one I watched 3 times.

If you don’t want to exit Customs, you can stay on the air side and catch the internal skytrain which passes through the complex.

On the return from Paris, I arrived into Singapore around 7am. Not being able to sleep on the flight, I spent the morning wandering and eating my way around Singapore before checking into the hotel for a nap, and then walking around and eating some more. I had hoped this strategy would help me cope with jet lag but it didn’t particularly. I wandered around most of the next day as well, before going to the airport for my midnight flight back to Sydney.

Singapore has a hot and humid climate, being only 1 degree (111km) from the Equator. It’s very important to stay hydrated. Something with gin in it always works well for me.

“Esplanade Bridge to the Merlion”

The Merlion is the official mascot of Singapore. 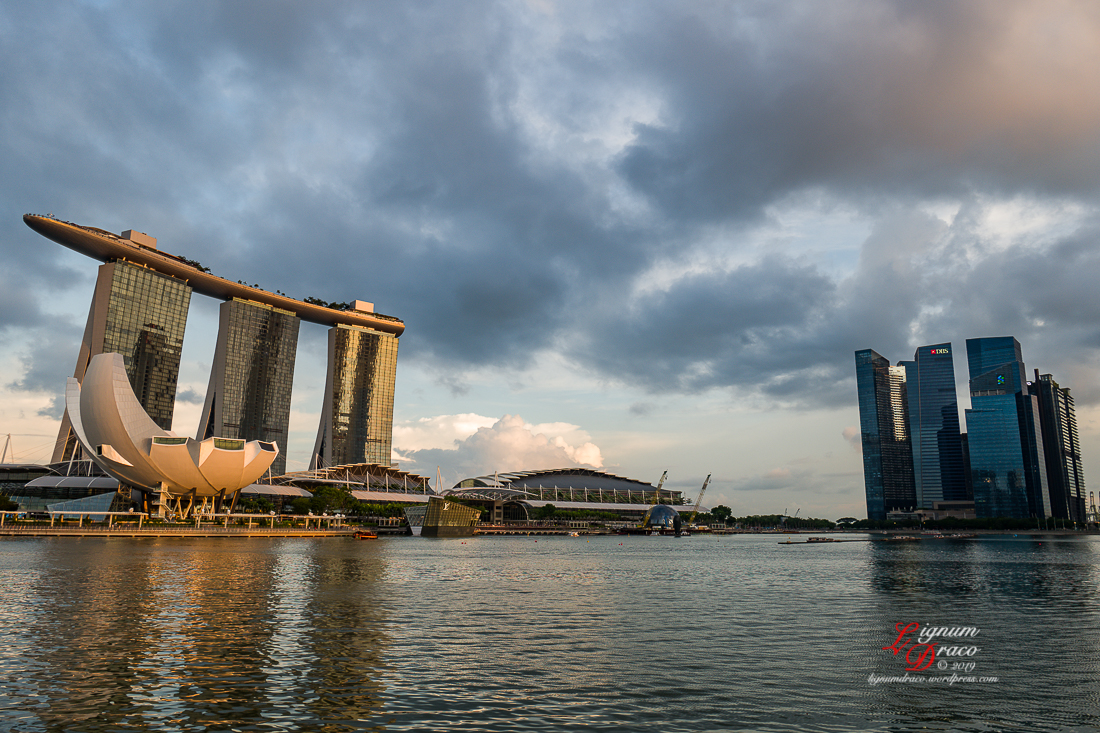 Marina Bay Sands is another iconic sight of Singapore. There’s a massive shopping complex below and a skypark at the top which includes an observation deck, restaurant/bar and infinity swimming pool. I’ve posted photos from the skypark previously. There’s a nightly light show at the front of the complex. In between ground level and the rooftop is a hotel, a casino, and theatre complexes amongst others.

Speaking of the hotel, I didn’t stay there, but I did walk on a bridge through the hotel to access the Gardens By The Bay – a passage through Singapore – that’s where the lead photo of this post was taken. 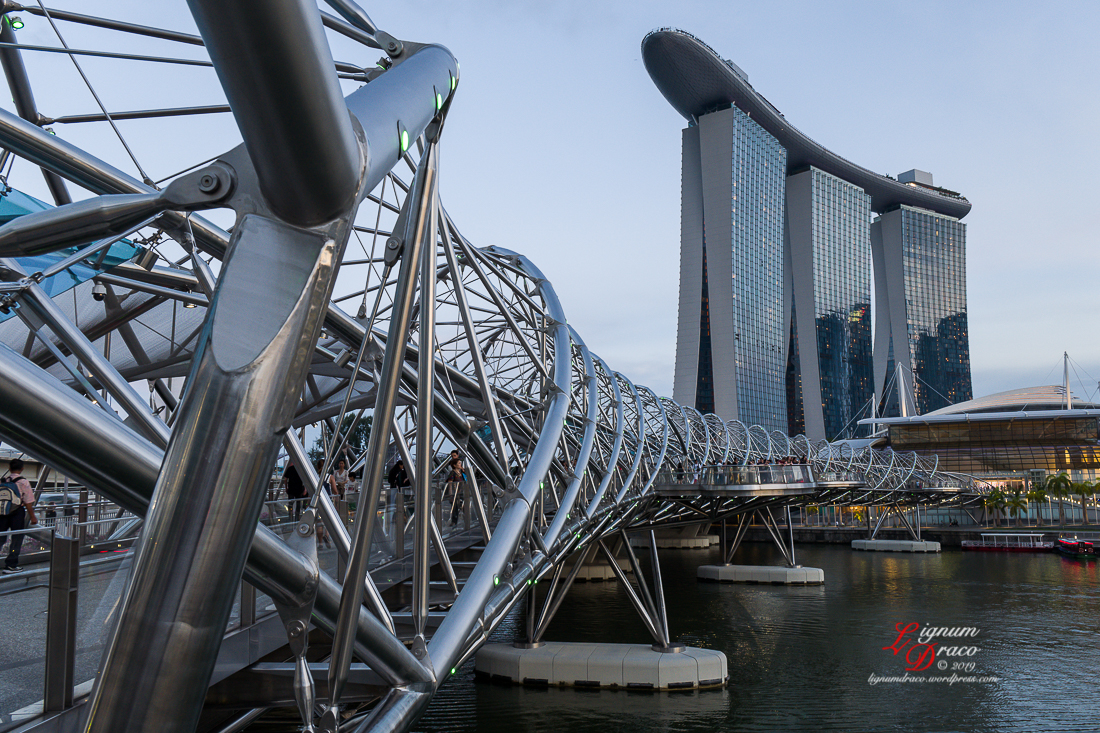 “Nightfall on the Lotus”

The lotus shaped building is the ArtScience Museum. I’m yet to go inside it, but I do believe it is a beautiful museum where exhibits fuse art with science.

Inside The Shoppes at Marina Bay Sands, another one of those massive shopping complexes that Singapore is famous for.

Like something from a science fiction movie, the Supertree Grove towers above the Gardens By The Bay. There’s a nightly light show here as well.

You can expect another post or two about Singapore in the future sometime, particularly since I’ll be there again before this year is ended.

88 thoughts on “A Passage through Singapore”