The Yangon Circular Railway is the local commuter rail network that serves the Yangon area. It’s a 46 kilometre 39 station loop system that connects satellite towns and suburban areas to the city. The entire loop takes about three hours to complete. A ticket for the entire loop costs 200 kyat, approximately 20 US cents, government subsidised to be deliberately cheap as the line is used by up to 150,000 people per day, mostly of lower-income by Burmese standards.

As with any train trip, the experience begins at the train station. Above is the Yangon Central Railway Station first built in 1877 by the British. However the station became a favourite target for Japanese bombers during World War II. In 1943 it was ultimately destroyed by British forces retreating to India as the Japanese forces advanced. The current station is designed in traditional Burmese architectural style, making prominent use of indigenous tiered roofs called pyatthat, and was completed in 1954. The Yangon Central Railway Station has been designated a landmark building since 1996. 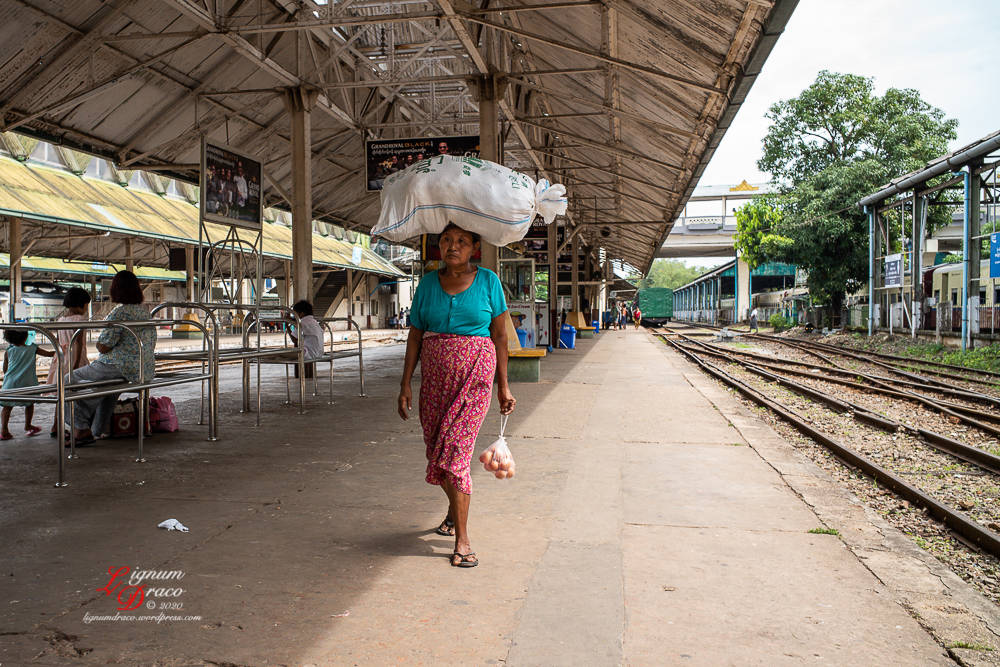 This is a very common sight in Myanmar, women carrying shopping on their head, particularly so at the train station. Waiting for about 30 minutes for my train was enough to convince me to come back to Yangon Central Railway Station a couple of days later, just to observe and photograph local life for about 3 hours.

But on this day, I was here to catch a train.

There are only two tracks for the Yangon Circular Railway, one for each direction. Trains are relic ex Japan Rail carriages and the average train speed is only about 15kph, or 9.5mph. Yangon has a hot humid climate, but it wasn’t a particular surprise that the trains have no air-conditioning. But the doorways of the carriages have no doors which means you can hang out of the train and catch a soft breeze to your heart’s content. 🙂 🙂 🙂 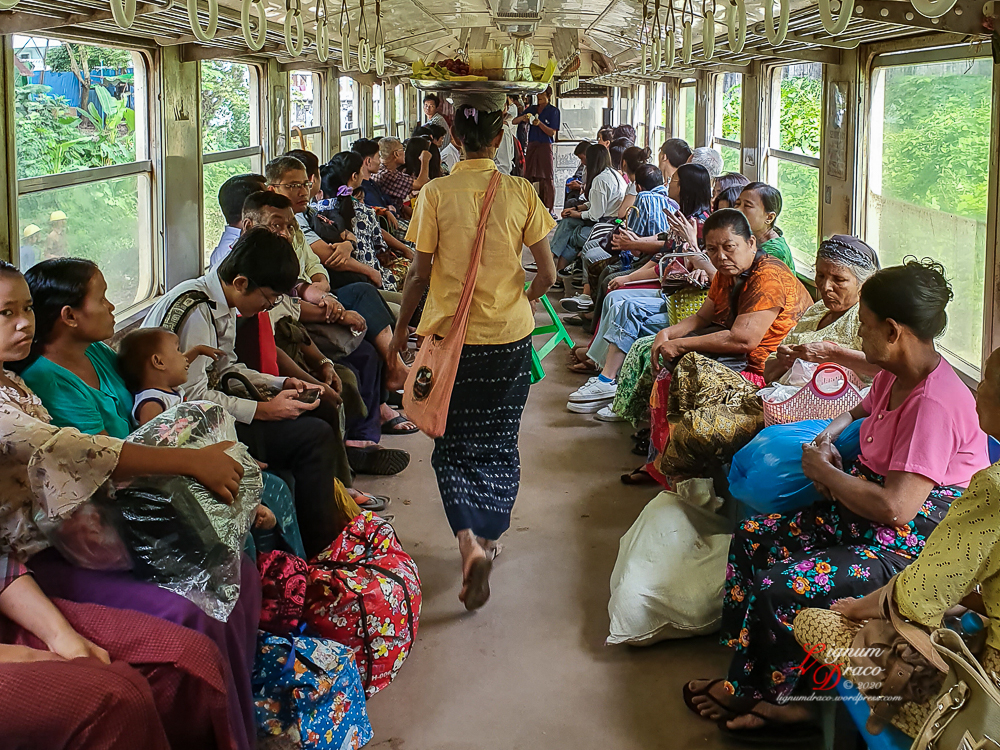 Vendors patrol up and down the train carriages regularly, mostly selling food/meals, although I did see a vendor selling sunglasses, and another selling chewing tobacco. Balanced on the above woman’s head is a tray with the ingredients needed to make her particular meal specialty.

If you’re hungry, you signal the vendor to come over. They set their stool down, sit, take the tray off their head, and assemble your meal right in front of you. Most people seemed to eat immediately on the train.

Judging by the number of women with kitchens on their head parading up and down the train, the Burmese must get very hungry on trains.

Above is the front carriage and you can see the front is open. The driver is sitting in the booth on the left. His assistant is sitting in front of the door. As I mentioned, the trains travel slowly – through the open door you can see a guy walking on the tracks right in front of the train. I went up to the assistant and asked if I could stand at the door to take photos – his big smile let me know he had no problem with that.

Myanmar only opened up to tourism recently. As such, foreigners are still a novelty to many, particularly away from the tourist areas. Three of the people in the photo above took selfies with me.

I got off the train twice, and at this rural location I took a long walk, eventually finding myself in a shanty-style village with a local monastery. The building with religious script on the walls is the bathing and laundry house for the local monks. Soon, a small crowd of locals gathered around me. I posed for the obligatory selfies with those who had cameraphones, including monks, something that I would have to repeat several times more during my stay in Myanmar.

“Meanwhile, back at the local train station”

Indeed, this is the train station and you can see the women with sacks, their shopping for the day, waiting for the train to arrive.

The train arrives and everyone gets ready to climb on board, and at this station you really do need to physically climb on board. Trains only stop for a few seconds at some stations, and longer at others. It’s a well practiced routine – people help each other with those multiple large sacks of shopping get on and off the train as quickly as possible.

When you (deliberately) get on last, as I did, you tend to get stuck behind all the shopping. Unbelievably, the shopping sacks are no obstacle to those food vendors with a mini kitchen balanced on their head who continue to walk up and down the train…

62 thoughts on “The Yangon Circular Railway”