Bagan is an ancient city and a UNESCO World Heritage Site located in the Mandalay Region of Myanmar. From the 9th to 13th centuries, the city was the capital of the Pagan Kingdom, the first kingdom that unified the regions that would later constitute modern Myanmar. During the kingdom’s height between the 11th and 13th centuries, 4,446 Buddhist temples, pagodas and monasteries were constructed in the Bagan plains alone. Many survive in various states of decay and renovation.

I suppose the obvious post about Bagan would feature its landscapes and temples. That will come another time. For now, here is a selection of local Burmese who kindly allowed me to photograph them; my Portraits from Bagan. It’s surprising how far one word (Mingalaba = Hello) and a smile will get you when in Myanmar.

Above a young boy sits on temple steps, seemingly lost in thought.

This man was sitting outside an ancient temple, doing not much. I think he enjoyed the attention he was getting from my camera.

A child monk at the Shwezigon Pagoda, during Tazaungdaing. Whilst I was photographing him a teenage monk came up behind him and started draping his robe on this young monk’s head. The young monk didn’t flinch but his eyes say it all.

I think that wall was made to be photographed.

In a small village somewhere in Bagan.

I crouched down to be at their same head level.

“Child at a roadside stall”

There are many roadside stalls in Bagan. This toddler eating rice was at one of them.

It seems tourists remain a curiosity to many Burmese. I noticed this monk was taking photos of me, so I took one of him. 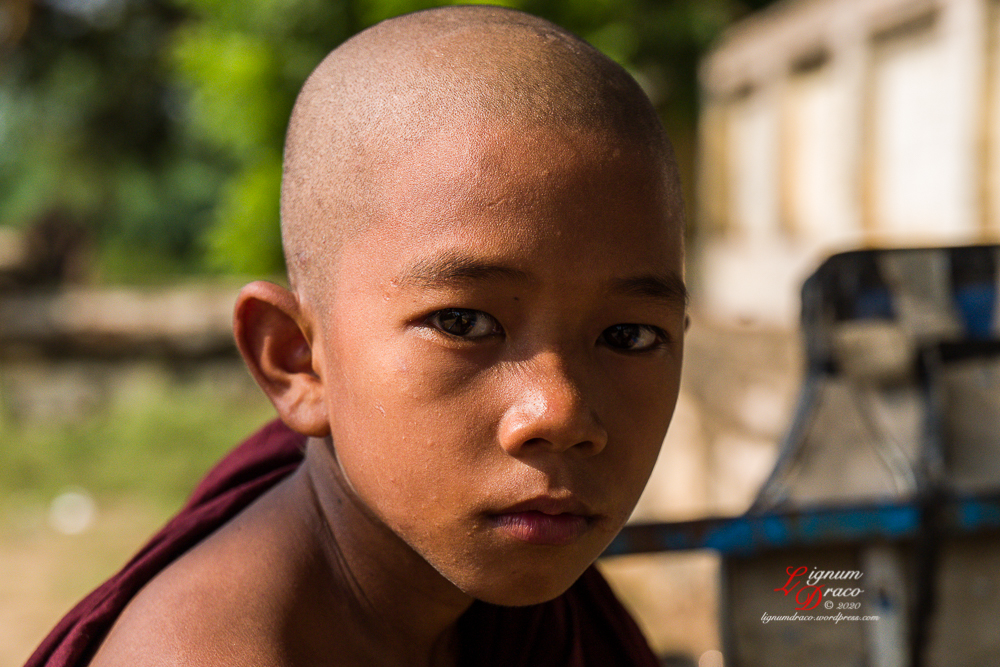 “Young monk sitting on the back of a truck”

An inside view of the house with the woman smoking a cheroot.

60 thoughts on “Portraits from Bagan”