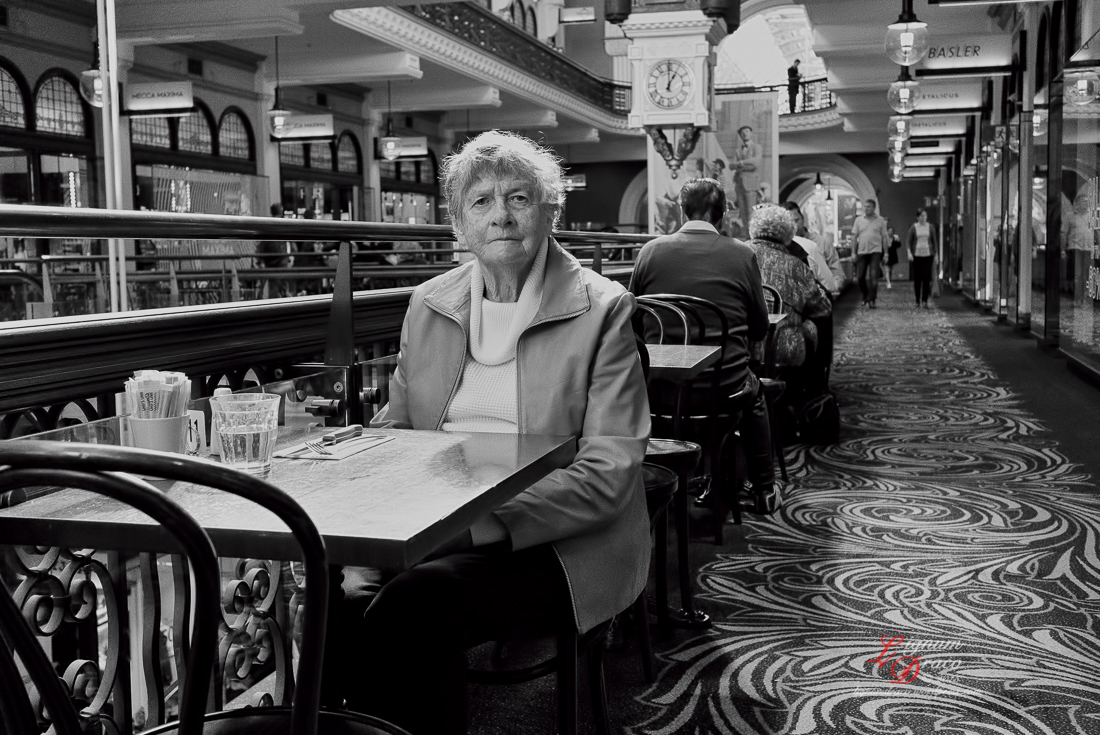 “Portrait of a Lady”

“My photographs are not planned or composed in advance, and I do not anticipate that the onlooker will share my viewpoint. However, I feel that if my photograph leaves an image on his (or her) mind, something has been accomplished.”
– Robert Frank, photographer.

I think this quote is very true for me. Usually I just wander with my camera ready and just take photos of whoever comes into sight. I’m generally not looking for anyone or anything in particular. I find that a scene will often just present itself, allowing me to maybe take a photo that will leave an impression in somebody’s mind.

I took the photograph of a lady above as I walked past her table. My lens was prefocussed to about 2 metres and once I was at the right position I took the photo. I’m pretty good at not bringing attention to myself. She was just sitting there and staring into space and it so happened that I took the photo as my camera was in the line of her stare. If you’re wondering, this is the photo I took 2 seconds earlier:

“Sometimes she went so far as to wish that she should find herself in a difficult position, so that she might have the pleasure of being as heroic as the occasion demanded.”
― Henry James, author, The Portrait of a Lady.

You can see the woman still just staring blankly into space in the background. The younger woman in this second photo is just adjusting her hair. If you’re interested, this is the photo I took 2 seconds earlier:

All 3 of these photos were taken whilst I was walking. All 3 women were just doing nothing in particular. You may now have an appreciation of how close I get to take my photos. In part that is neccessitated by the other people in the corridor at the time. These photos were all taken with a 40mm focal length lens. Here’s a nice “portrait type” crop of the first photo:

“She had an immense curiosity about life, and was constantly staring and wondering.”
― Henry James, author, The Portrait of a Lady.

“There is one thing the photograph must contain, the humanity of the moment. This kind of photography is realism.”
-Robert Frank, photographer.

Robert Frank (born November 9, 1924), is a photographer and documentary filmmaker. His most notable work, the 1958 book titled The Americans, earned Frank comparisons to a modern-day de Tocqueville for his fresh and nuanced outsider’s view of American society.

Henry James, OM (15 April 1843 – 28 February 1916) was an American writer who spent most of his writing career in Britain. He is regarded as one of the key figures of 19th-century literary realism. He is best known for a number of novels showing Americans encountering Europe and Europeans. His method of writing from a character’s point of view allowed him to explore issues related to consciousness and perception, and his style in later works has been compared to impressionist paintings. The Portrait of a Lady is one of James’s most popular long novels, and is regarded by critics as one of his finest.

Over at the WordPress Weekly Photo challenge, the topic this week is Monochromatic. I thought I’d just keep doing what I do, in black and white, the purest form of monochrome.

94 thoughts on “Portrait of a Lady”