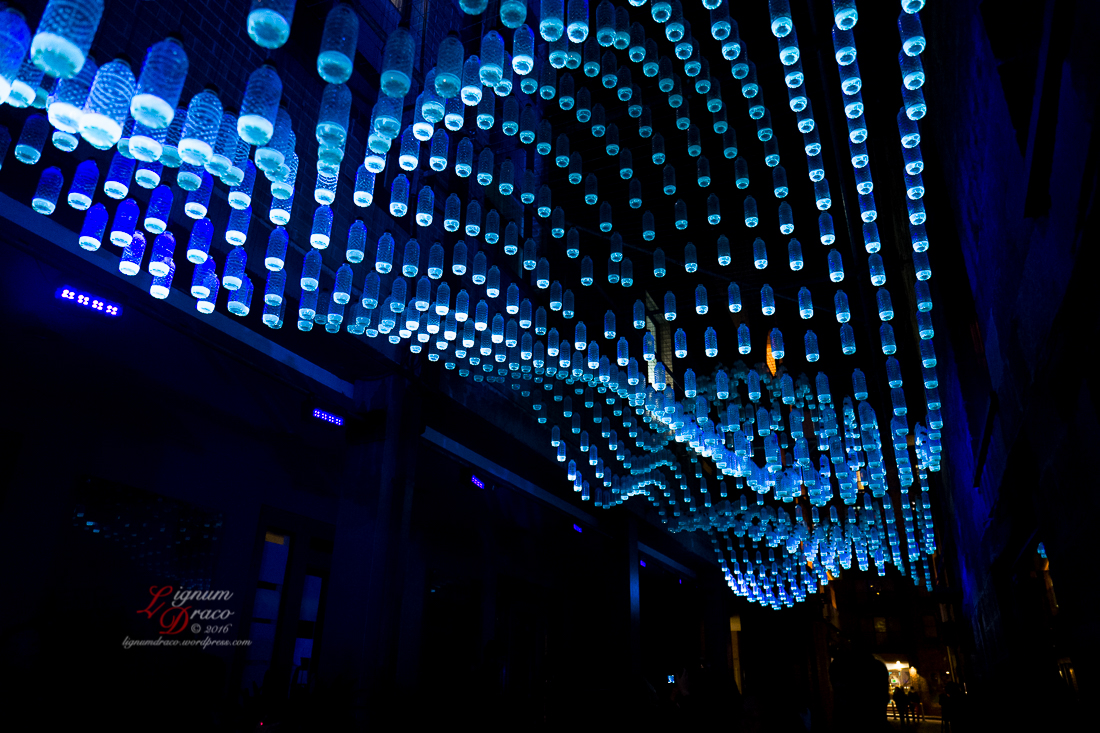 Apart from the major light installations, many smaller ones are on display around the city, mostly arranged so that it is easy to walk from one to another. Many of these are interactive and add to the festival atmosphere. Let’s take a random walk to see some of these…

Tectonic by Sean Virili, Justin Hartany, Matt Fung and Jamie Bastoli. Tonic water, bottles and elbow grease are the key ingredients to powering this beautiful and sustainable lighting installation suspended above a Sydney laneway. The constantly moving, luminescent form is constructed of 1500 upcycled PET bottles filled with tonic water. The quinine in the tonic interacts with invisible ultraviolet rays to emit a glowing blue light at night. The presence of any airflow provides a subtle oscillation for the sculpture. 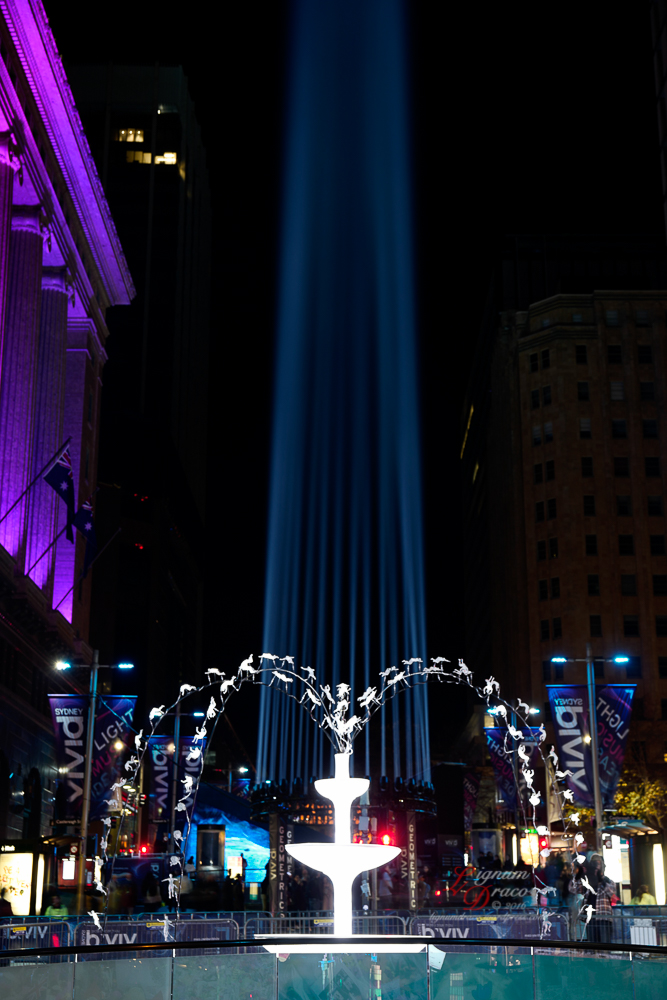 In the background is Geometrics by Simon Aitken. Here, 32 moving lights are placed on a high circular truss; working in unison the lights create dazzling effects, projecting columns of light into the night and forming whimsical decorative shapes and strong pattern designs. Seen from a distance the apparently suspended form of the Geometrics light sculpture certainly delivers a ‘wow’ factor, but for those gazing up from beneath, there is a more intimate light show. 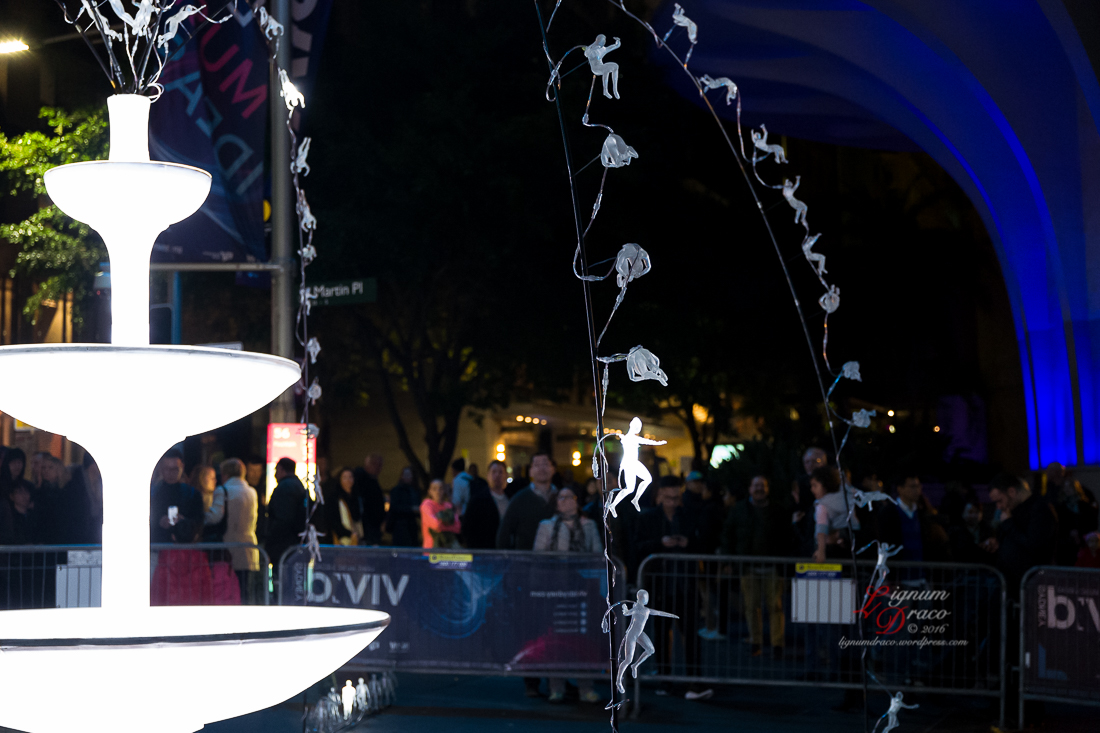 In the foreground is Fountain by Ample Projects, S1T2, and the National Institute of Dramatic Art which will be live-streaming global birth rate data as ‘human water droplets’. These ‘water-humans’ will emerge from the Fountain’s water jets – shoot skywards, float to the ground, land on their feet and walk into the distance. 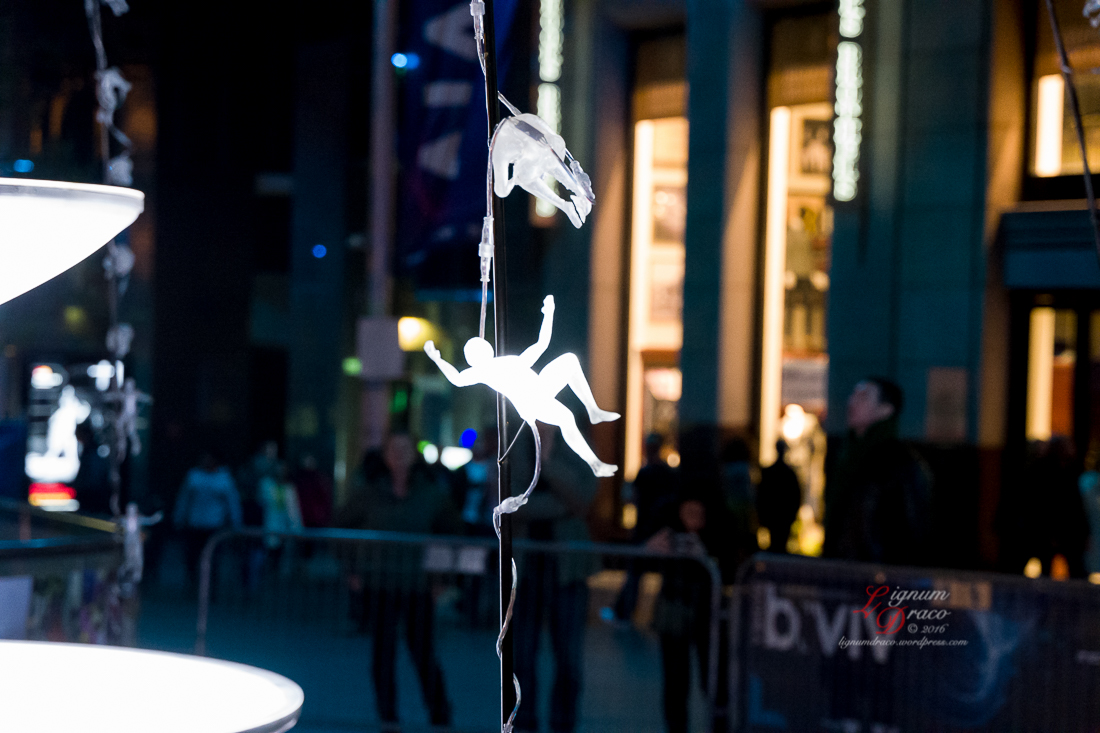 A celebration of the fleeting human life cycle, Fountain demonstrates – in real-time – the global human birth rate as a flowing stream of humans evolving and fading in a solid stop-motion animation.

Shadow Wall by Natalia Galin. “What can happen to a shadow when the sun disappears?” The answer is Shadow Wall, the opposite of a shadow. Not so much a wall but a vision system that subverts the concept of night-time shadows by rendering them in a blaze of colour and movement and new vibrant life. The installation uses three-dimensional mapping to capture the changing scene before it and then renders what would be dark, sinister shadows on any other wall into multicoloured silhouettes that light up as they mirror the movements of passing visitors.

Participants interact with the wall and, through controlled movements, can have their shadows ‘perform’, pose and make shapes, or merge with the shadows of other visitors to light up the entire wall at once. 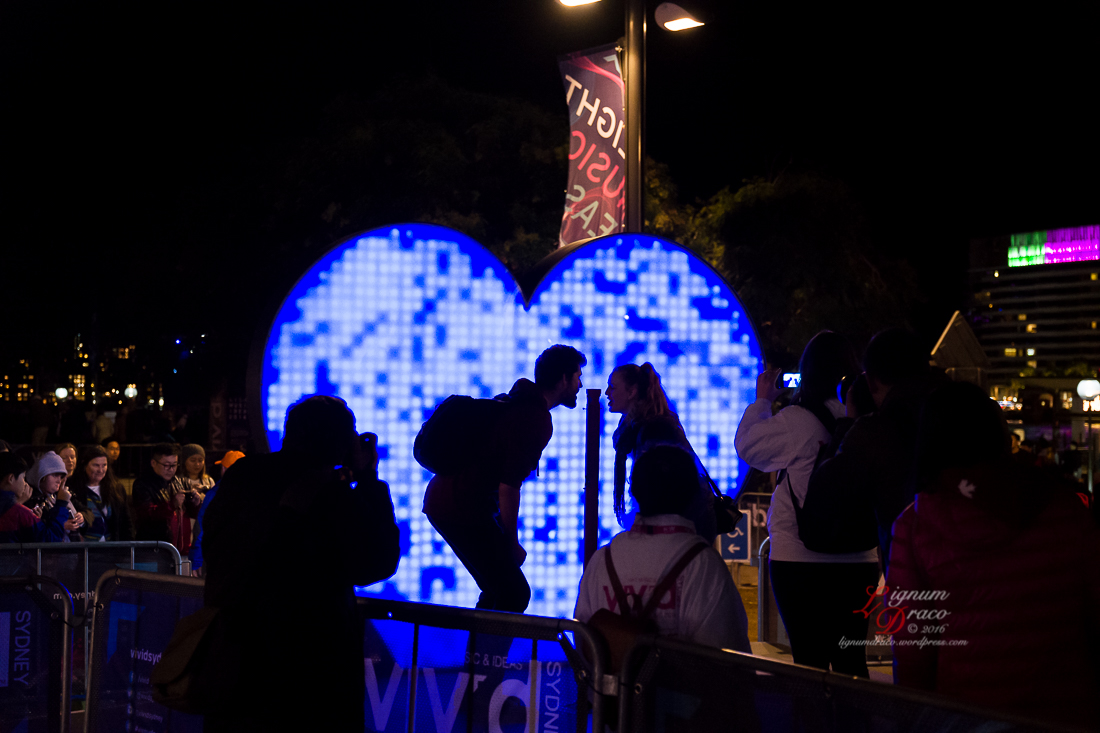 I LOVE YOU by Selena Griffith, Edison Chen, Nila Rezaei and Nathan Adler is a giant illuminated heart-shaped ‘Love-O-Meter’. Deliberately corny and kitsch, it encourages couples to publicly declare their love by standing opposite each other on a podium and shouting ‘I LOVE YOU’ in unison, in order to fill a giant heart with as much light (love) as possible.

Underwater Forest by mcdermottbaxter is inspired by the beautiful maritime industrial architecture in Walsh Bay. The artists were intrigued to discover that parts of this area of the harbour are up to 30 metres deep and that the wharves are supported by magnificent native Australian timbers. Constantly changing coloured light illuminates the ‘underwater forest’ that exists beneath the iconic wharves, highlighting its intricate patterns and textures.

Osmose by Hamish Steptoe is a multi-sensory artwork that visitors experience by lying down under coloured shards of light. The changing colours of the shards evoke feelings of calmness and stillness or energy in the viewer. As they lie underneath the shards and let the light wash over them, participants also experience sounds tuned to the frequency of the colour that appears above.

Spectrum by Jarrod Barrow transforms a part of the urban environment into a bright, engaging community space using colour, movement and a line of multicoloured rods. The rods contain lighting technology and are hinged to a specially constructed steel base. When visitors interact with the rods by tilting them just 20 degrees away from their upright position, their colours change, transitioning across the spectrum. 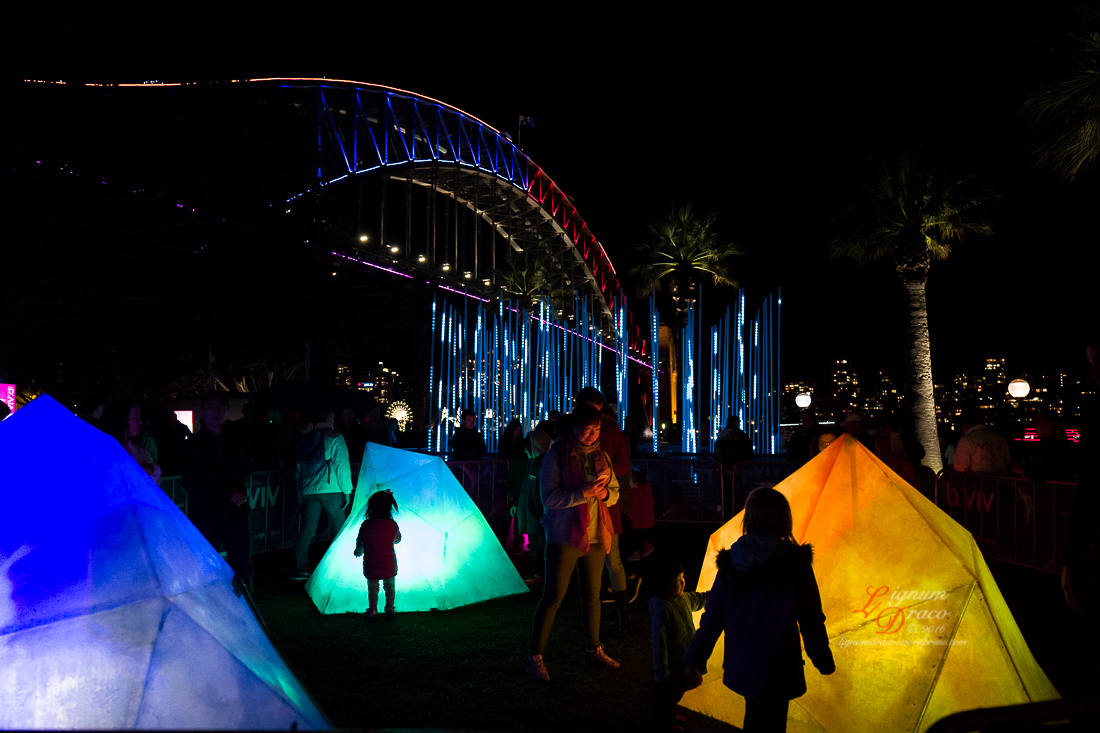 In the background, the Harbour Bridge lights and city building lights were controlled at a panel near the Opera House, where people could have turns choosing what colours they wanted to use.

In the middle is Sweep by Alexandra Heaney and Julia Heaney. Sweep slowly moves with the breeze. When viewed from a distance this work provides the illusion of suspended light rods bobbing softly and gracefully from side to side, like a school of fish in a deep current; however, when viewed up close the effect is very different. Those walking through Sweep will feel confusion and a sense of intimidation as the large individual lights move ominously above and around them.

In the foreground is Attune by Jonathon Bolitho and Harry Hock. The installation features a cluster of large crystalline forms that appear to grow from the ground; each ‘crystal’ is highly reactive and pulses with colour, light and sound in response to the voices and conversations of visitors. 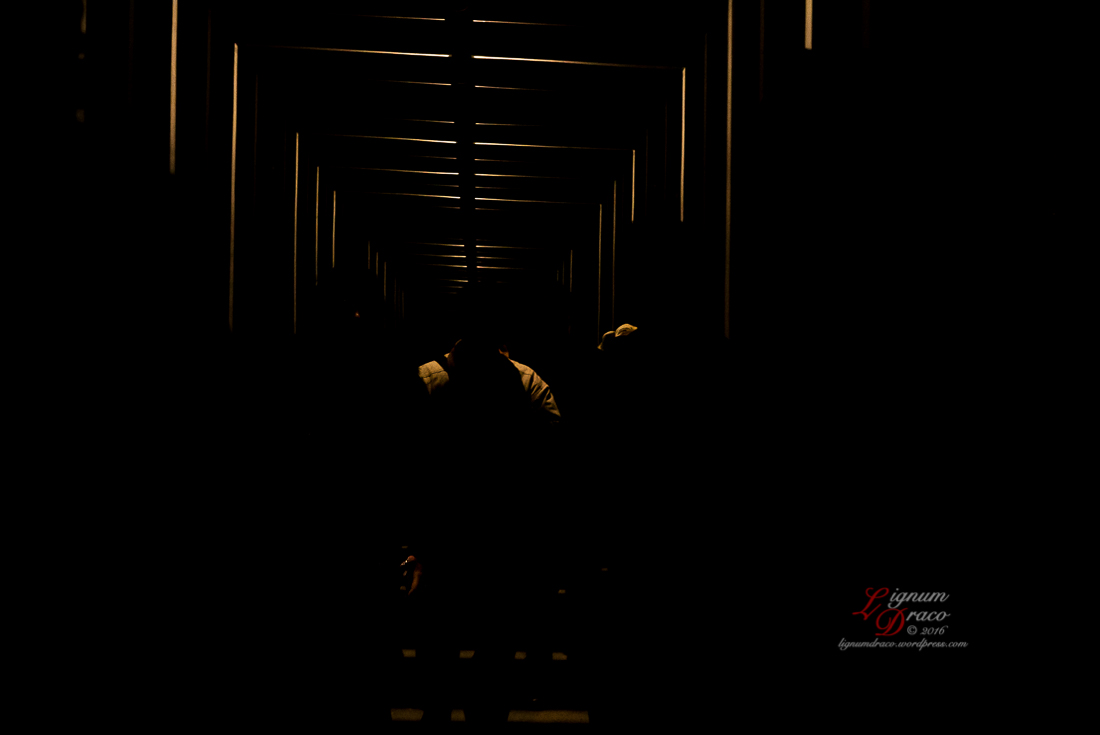 Infinity Box by E-Lux Lighting Design is a large unassuming box with a discrete doorway. The question is: “What’s in the box?” The answer is found by stepping through darkness into a never-ending world of pattern and light aided by mirrors to create an infinite pattern. I stood directly in front of the mirror and waited for the right moment. Savour this moment, folks. You may never see a clear full frontal selfie of me again. 😉

Horizon by Indermühle + Indexmühle. The installation presents as a painting of an arid central-desert landscape, reaching into the distance like a mirage. The sense of horizon is captured by a series of vertical lights, lined up along the wall and which graduate in colour from blue to reds and oranges. The sandstone blocks of the wall lend warm rich tones and texture and the illusion of a vibrant blue sky reaches deep into the night and reminds the viewer that there is a natural beauty to the unique light of this country. 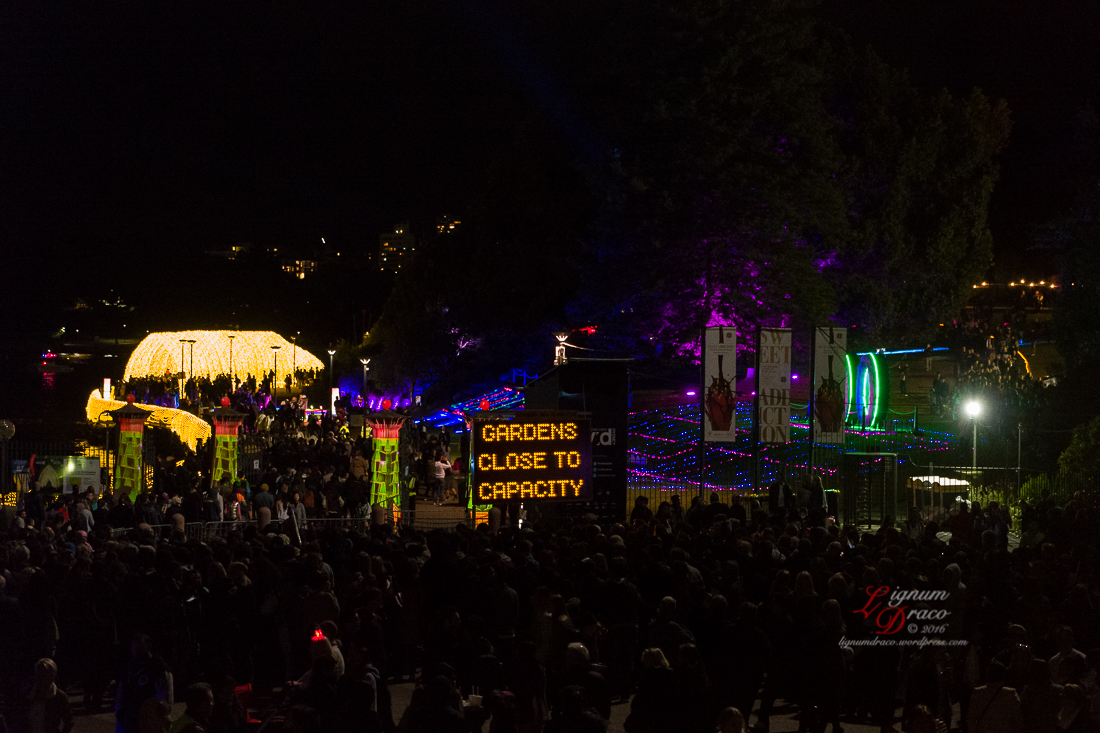